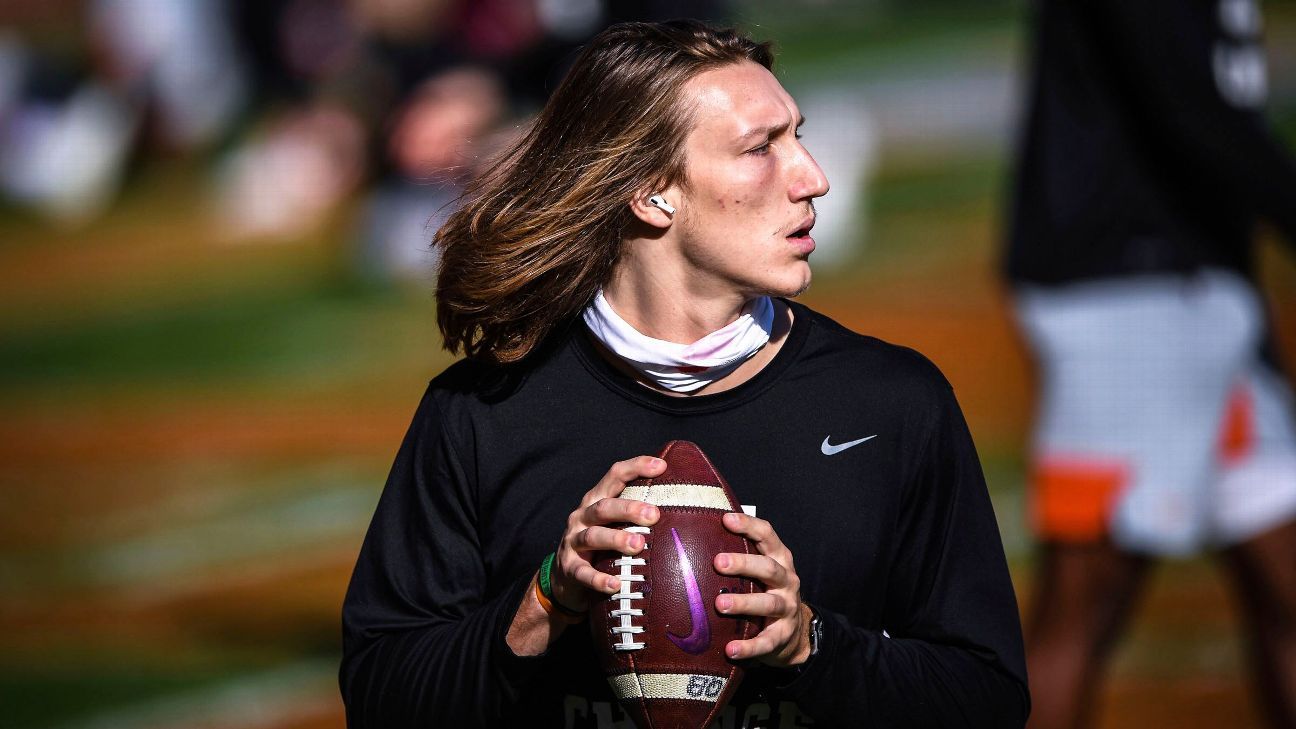 
Former Clemson Tigers quarterback Trevor Lawrence had good reason to hold his pro day on Friday, a month early. Lawrence wanted to prove to NFL teams that he’s able to handle himself well when things don’t go according to plan.

“The original plan was to have two months training out in California, then come back March 11th and put on a show and do all that, but life happens sometimes,” Lawrence said on the ACC Network/ESPN2 following his 45-minute workout at Clemson on Friday. “Just having to adjust and showing I’m able to adjust and adapt and still willing to come out here and throw and give teams a chance to see me, that was important to me and important to my team to make sure we made that happen.

“Obviously it wasn’t necessarily the ideal situation and circumstances but I think we did a great job of just kind of maneuvering and navigating through all that.”

Lawrence moved up his pro day because he is scheduled to undergo surgery to repair damage to the labrum in his left (non-throwing) shoulder and wanted to be completely cleared before training camps open in July. He threw approximately 40 passes — mostly from under center — to receivers Cornell Powell, Charone Peake, Caleb Scott and Chris Finke at Clemson’s indoor practice facility.

Lawrence said he’s expecting to start throwing six-to-eight weeks after the surgery and be fully cleared after four to five months.

On Friday, Lawrence threw a variety of passes, which included some rollouts, and ended with a 65-yard deep throw on a broken play in which he scrambled before launching the ball. That throw drew praise from the ESPN on-air crew as well as on social media. But ESPN NFL draft analyst Todd McShay, who was at the workout, was more impressed with Lawrence’s work in the red zone.

“Quickly getting the ball out and throwing the ball high where the defender can’t go get it,” McShay said on the broadcast. “I saw that consistently inside the red zone today, just the ability to throw the ball high in that specific spot, the ball placement.

“Yes, the deep throws were great and the vertical throws is what everyone loves … But inside the red zone you can learn a little bit about a quarterback in terms of how quick he gets it out and where he places that ball.”

“Yeah, yeah. I saw him,” Lawrence said with a smile. “I saw a lot of the guys coming through, but yeah, I saw him. Just waved at him real quick. Can’t really communicate out there. But yeah, it’s been cool to see all the teams come out. It’s definitely a cool thing to experience. I’m glad I got to still do it.”

Lawrence — who measured in at 6-foot-5 5/8 and 213 pounds with 10-inch hands, 34½-inch arms, and a 78¼-inch wingspan — said he’s most looking forward to learning a new offensive system as well as adjusting to life in the NFL. He said he enjoys the mental challenge of football, which is something every coach wants to hear.

“I think, mentally, obviously, the game’s a little bit different at the NFL level and what’s on your plate,” Lawrence said. “So just taking this time, especially after surgery, to really prepare mentally while I can’t physically and then once I can physically really I’m going to just be grinding and getting ready. Just really excited for that challenge.

“I love learning. That’s one of my favorite parts about the game. It’s such a fun thing to learn a new system and kind of piece everything together. It’s a lot of fun so I’m excited to do that, but I think that’s the biggest thing is just mentally, defensive recognition, playbook, all that stuff.”

Croatia wants tourists to move there. These people are doing just that