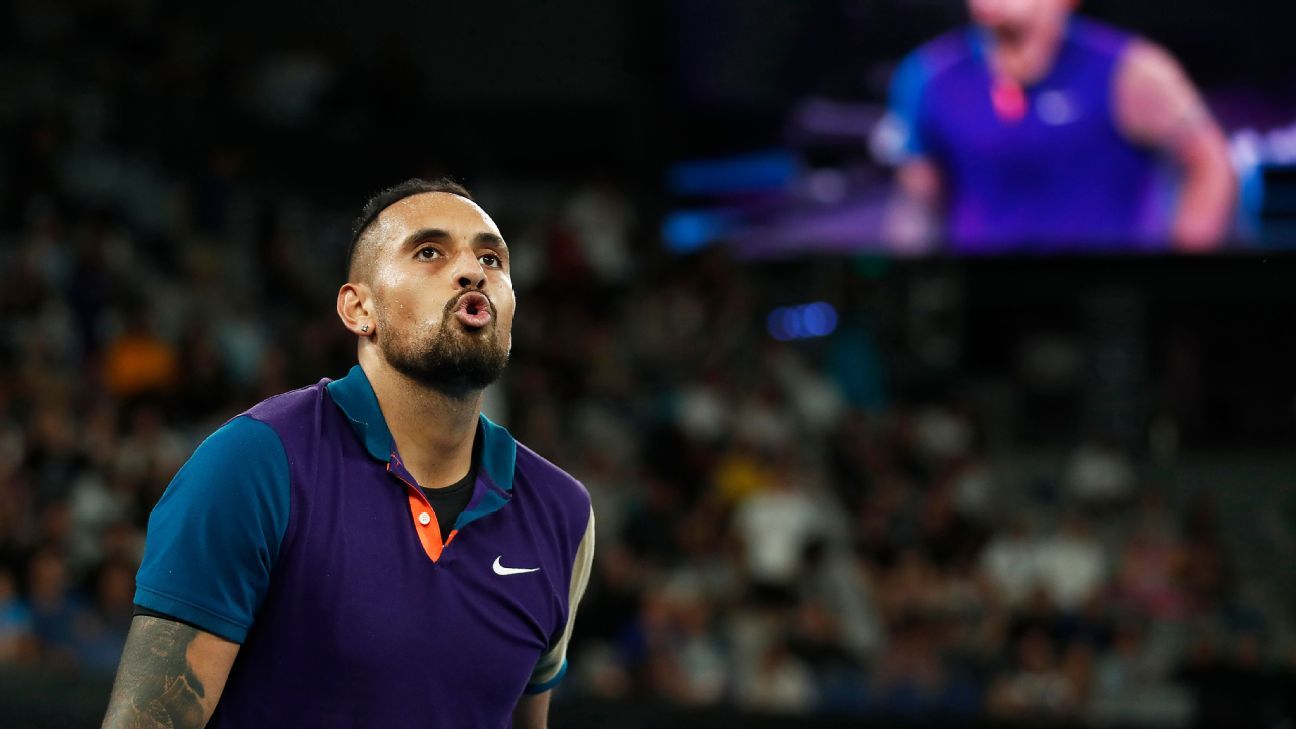 
MELBOURNE, Australia — If Friday night turns out to be the last we see of fans at the Australian Open in 2021, Nick Kyrgios and world No. 3 Dominic Thiem treated the vocal John Cain Arena crowd to a memorable evening of Grand Slam tennis, one which featured multiple code violations, heartwarming sportsmanship, a stoush or two with the chair umpire and some downright jaw-dropping play.

Day 5 at Melbourne Park was thrown into utter chaos when Victorian Premier Daniel Andrews announced the state would be placed into a snap five-day lockdown to deal with a growing COVID-19 cluster in the city’s outer suburbs. The implications for the Australian Open were simple: no fans for at least five days and players were to be placed into a ‘COVID bubble,’ until such time as it was safe to ease restrictions.

The lockdown and return to Stage 4 restrictions was scheduled to begin at 11:59 p.m. local time Friday (7:59 a.m. ET) and, as a result, anxiousness had set in around the city. Toilet paper once again became a hot commodity as supermarkets were forced to deal with mass panic-buying ahead of the deadline, while arrangements for last-minute catch-ups with family and friends were made.

“With the announcements today about the lockdown, it felt like the last hurrah,” Kyrgios said. “The energy out there with the crowd was special.”

Those at Melbourne Park who had snapped up tickets to the hottest tennis match of the tournament thus far weren’t going anywhere. Kyrgios, on his favorite court in the world, didn’t wait long to give his fans something to cheer about, breaking the reigning US Open champion in the opening game and channeling his inner Lleyton Hewitt with a roar of “C’mon.”

Kyrgios’ intensity, something which at times during his career has been questionable, was simply faultless early on. He kept himself on top with his power-serving and hunted down every ball during Thiem’s service games, heaping the pressure on last year’s Australian Open runner-up.

At 4-4 in the second set, Kyrgios broke Thiem for the second time in the match, and after holding serve in the next game for a two-sets-to-love lead, strode off the court with his arms spread wide as Christ the Redeemer.

But all it takes is one stray game or one moment of madness for Kyrgios to lose his concentration. It’s exactly what appeared to happen when Thiem broke in the second game of the third set, one which Thiem took in 33 minutes. Kyrgios received a code violation for a visible obscenity after dropping the game and proceeded to shake his head in frustration. He berated himself throughout the set, bizarrely, it was as if he was hunting any sort of negative energy.

Of course, it wouldn’t have been a Kyrgios appearance at a Slam without some chatter aimed at the chair umpire. After Damien Dumusois penalized Kyrgios for hindrance in the fourth set, Kyrgios snapped, “So [Victoria] Azerenka’s grunt is fine, but that’s not fine.”

The scene was eerily reminiscent to Kyrgios’ second-round match against Italian journeyman Andreas Seppi at the 2017 Australian Open. On that occasion, also on John Cain Arena, Kyrgios imploded and blew a two-set lead.

But this was a different Kyrgios. A Kyrgios who has has grown an enormous amount since that loss to Seppi and one who praised Thiem throughout the contest, frequently muttering “too good” and “well played” whenever a winner was struck from the other side of the court, and on one point labelled a Thiem backhand down the line as “ridiculous.”

“He’s the third-best player in the world for a reason, and I’m right there and I believe in myself,” Kyrgios said. “I knew that today I had an absolute fighting chance and I walked into that match expecting to win. I’m super proud of everything I’ve done the last couple of months to get ready for it.”

With a fifth set imminent, fans in the arena and dozens more huddled in Garden Square watching on the big screen were beginning to glance down at their watches and phones, attempting to work out how they would complete their journeys home before the Stage 4 restrictions commenced.

Over on Rod Laver Arena, as world No. 1 Novak Djokovic was battling American Taylor Fritz, messages to leave the venue were being pumped through the PA system. Tennis Australia was taking no responsibility for any fines dished out to those who stayed out past the newly-imposed curfew.

But nobody dared shift from their seat at John Cain Arena and the support for a gritty Kyrgios poured in — right up until Thiem struck a stunning backhand down the line to secure match point and punch his ticket to the fourth round.

“I’m at the point in my career that if I lose I cop it on the chin and don’t complain, you know. He just played too good,” Kyrgios said after the match. “I have a big heart and I’m really proud of what I have been able to achieve.”

Thiem’s comeback should not be underestimated. The Austrian remained calm throughout the contest and never once look flustered, despite finding himself down two sets inside 90 minutes. He not only had to battle Kyrgios, but a vocal crowd cheering their man on throughout.

“I was dealing with the loss but then fighting myself. Giving up is not an option,” Thiem said after the match. “When I got the break in the third set, I realised there was a chance to turn it around and the longer the match got the more comfortable I felt. This was a good last match before lockdown.”