Ringside Seat — Richard Commey ready to reclaim his place at 135; Joseph Diaz Jr. to start over at 130 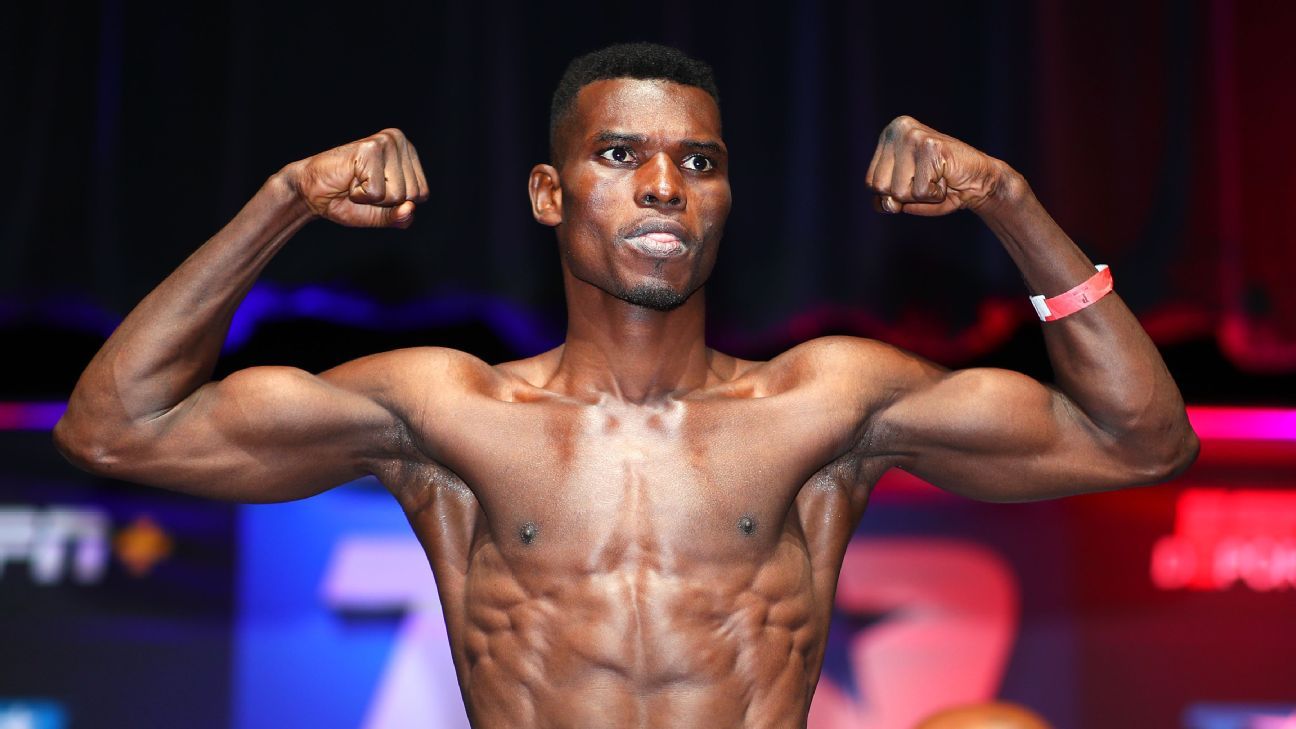 
Two main events in two different cards scheduled for Saturday suffered last-minute changes due to a COVID-19 positive and problems at the weigh-in.

A new main event was set late on Thursday as the light heavyweight title fight between Joe Smith Jr. and Maxim Vlasov was canceled due to COVID-19. There won’t be a title on the line, but heavy punchers will seize the main event spotlight as Richard Commey and Jackson Marinez (ESPN+, Sat., 10 p.m. ET) square off. Also on the main card, Adam Lopez takes on Jason Sanchez in a 10-round featherweight fight, and heavyweight sensation Jared Anderson takes on Kingsley Ibeh in a six-round battle.

In Indio California on Friday, IBF junior lightweight world titlist Joseph Diaz Jr. lost his belt on the scales, after showing up 3.6 pounds over the division limit and won’t be able to regain the title, even if he defeats Shavkatdzhon Rakhimov on Saturday. However, Rakhimov will be eligible to win the belt if he defeats Diaz.

Commey (29-3, 26 KOs), hasn’t fought since losing his IBF world title by second-round TKO against Teofimo Lopez in December 2019. This is the longest layoff of his career. The former kickboxer and soccer player turned pro at 24 years old and began his career with 17 consecutive knockout wins.

“It’s been a long and frustrating wait to get back into the ring, and [Saturday] can’t come soon enough,” Commey told Top Rank recently. “I’ve kept myself in shape, but once I heard the date, I stepped up my training. All I’ve been thinking about is winning back my title. I am not looking past Jackson Marinez, as I know he is a tough, slick fighter, so he has my full attention. The road to redemption begins now.”

Marinez (19-1, 7 KOs) lost for the first time in his career back in August, challenging Rolando Romero for the WBA interim lightweight title. Marinez outlanded Romero in that fight and thought he was deserving of victory.

“That was pure robbery,” Marinez said after the fight. “I won the fight. I outjabbed [him], outboxed him. You could tell he didn’t think he won the fight right afterwards. It’s a robbery.”

The winner of this fight could get into the title picture once again.

Joseph Diaz Jr. began visualizing this future over a decade ago. It was 2007, and he had just become a national champion for the first time, winning the Silver Gloves. Barely a teenager and still a relative neophyte to what he did and didn’t know in boxing, he turned to his father, Joseph Sr.

“Man, dad, one of these days, I’m going to be a world champion.”

Diaz Jr. didn’t know how his road would go, but he understood the work ahead of him. He picked up on the study of fighters — Floyd Mayweather, Manny Pacquiao, Oscar De La Hoya — and saw them not only win world titles, but defend them.

He wanted that. He craved that. He told his father this was his goal, to “be a household name and defend my title and have my belt and have fans watching me and have a main event, have sold-out arenas.”

Joseph Diaz Sr. listened to his son. Let him finish. Then told him he believed in his talent, but if JoJo wanted to reach the pinnacle he set, he was going to have to work. And work. And work.

“Right after I told him that, he was like, ‘Well, JoJo, man, you got a lot to improve on and a lot to work on. It’s not easy. You see these guys performing and see these guys looking good and doing this and fighting 12 rounds with ease? It takes a lot of hard work and a lot of dedication. Are you willing to do that?'” Diaz Jr. said his father asked him. “I was like, ‘Yeah, I’m willing to do that.’

Those efforts carried Diaz to a world title, then into this weekend in Indio, California, where the 28-year-old Diaz Jr. (31-1, 15 KO) was scheduled to defend his IBF super featherweight belt for the first time against Shavkatdzhon Rakhimov (15-0, 12 KO).

But Diaz couldn’t make weight on Friday, showing up at 133.6 pounds (Kakhimov was on weight at 129.8). Diaz will be stripped of his belt and only Rakhimov will be eligible to win it, with a victory.

Regardless, Diaz believes the walkout will be so much adrenaline, so much excitement. He visualizes it on his daily runs and in his training sessions. He thinks about what Rakhimov is going to do and what he is going to need to pull off to get the win — that pushes him.

All about the hair

Diaz is unsure about his hair. He knows he’s on the verge of it becoming “a thing” for him, a trademark that might start to be expected every fight. A burst of creativity he would be known for, another way to market the potential star and make him stand out.

The idea started after he saw rappers and reggaeton artists Bad Bunny and J Balvin coloring up their hair. He thought why not, he’d do it, too. So he dyed his hair for the first time before his fight against Freddy Fonseca on the undercard of a Canelo Alvarez main event.

It created a buzz. Diaz liked the look, knocked Fonseca out in the seventh round and decided he was going to keep rolling with it.

“It brings excitement and I think it brings character to the fight,” Diaz said. “So I’m thinking about doing it no matter what.”

Which leads to the most important question of all: If he’s going to have a dye job, what color might he go with this time? Because whatever he does, he knows it’ll be a topic of conversation. This — whether he does it or not — is something he’s given thought to.

“My colors are going to be blue, white and silver,” Diaz said of his ring gear for Saturday’s fight. “But I’m thinking about doing some type of purple or some type of red so it can stand out a little more than my actual outfit.

“Or maybe some slime green.”

Warrington ready to set his own path after vacating title

Josh Warrington sees Saturday’s fight against Mauricio Lara — his first in 16 months — as a springboard to bigger things as he seeks to vindicate his decision to give up a world title last month.

Rather than face English rival Kid Galahad in a mandatory defense, Warrington vacated the IBF world featherweight in frustration after the fight he wanted — a unification fight with WBA “regular” champion Xu Can (18-2, 3 KOs) — failed to materialize.

Warrington, who made three title defenses of that belt before vacating it, and promoter Matchroom still hope the Xu Can fight can happen before the summer, but first Warrington must regain some momentum and blow away the cobwebs against a hungry Lara (21-2, 14 KOs) at Wembley Arena in London. It’s the first of what Warrington hopes will be three fights in 2021, after not boxing at all last year due to the disruption and restrictions of the COVID-19 pandemic.

And after the layoff, Warrington (30-0, 7 KOs), 30, can expect a longer fight than his last one — a two-round demolition of Sofiane Takoucht in October 2019 — against 22-year-old Lara, who has had five fights in the time the English boxer has been kept out of the ring.

“When you are at your peak, just like a high-flying football team or a tennis player winning tournaments, it’s important you make progress,” Warrington told ESPN. “Going back to 2019, I was coming off three good wins and it just seems ages ago now. Each one of them was different: one was a quick knockout, one was a points win after a war and the other was a scrappy wrestling match. I thought 2020 was going to be massive, fighting Xu Can, fighting at Headingley, then going over to the US.

“But then all this happened and it’s been really frustrating. You see other people getting out and you think, ‘When is it going to be my turn?’ You feel sorry for yourself, but other people have died during this pandemic, so you have to put it in perspective. I’ve been training hard in my own gym working on things and my weaknesses. I’m 30. I was 27 when I won the world title, and it seems ages ago. I want to be out three times this year.”

Lara has not fought an elite-level opponent yet, but his activity — and Warrington’s inactivity — should present the former champion with a challenging ring return.

Leo Santa Cruz, Mexico’s four-weight world champion and reigning WBA featherweight titleholder, is Warrington’s No. 1 target. Warrington is also not ruling out a future rematch with English rival Galahad, whom he beat on a split points decision in June 2019.

“I want to have the fights where you are really testing yourself,” Warrington told ESPN.

“Xu Can has the WBA regular title, and if I can beat him then I could fight Leo Santa Cruz, that’s the fight that really excites me. If I did the mandatory fight, I might miss the opportunity to have this fight with Xu Can.

“With Galahad, the plan was after the unification fight with Xu Can, I would think about what to do with it, fight him or not. I would beat him more convincingly second time around. It was a scrappy fight, the first one, and he couldn’t fight any better than that. Now that I don’t have the IBF title, I can just carry on with my plan of fighting the biggest names. If Galahad wins the IBF, then maybe down the line we can have a unification fight.”