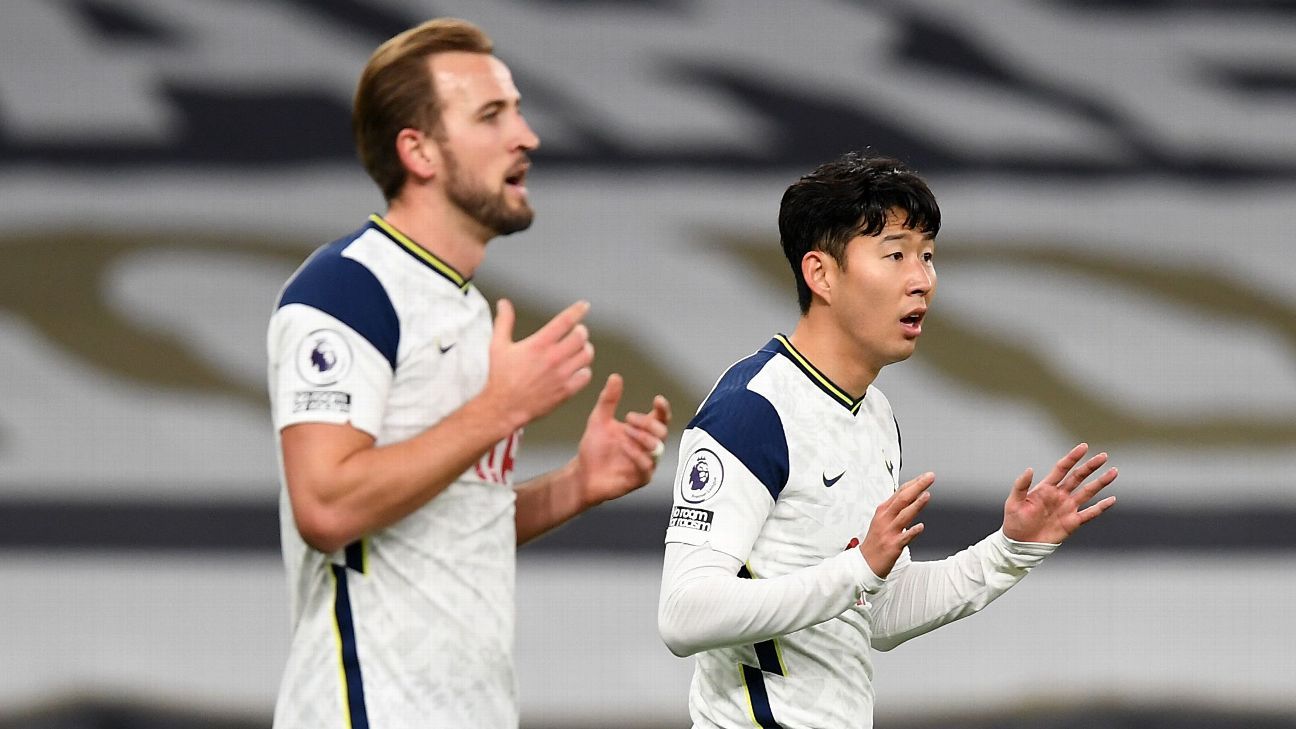 
Tottenham Hotspur’s first meeting with Manchester City this season left us wondering if Jose Mourinho could mastermind a Premier League title challenge. Saturday’s reunion approaches with the Portuguese facing questions over whether his style of football will ever deliver the silverware that Spurs crave.

Perhaps nothing encapsulates the changing fortunes this campaign has thrown up quite like the shift between Tottenham and Man City. On Nov. 21, goals from Son Heung-Min and Giovani Lo Celso gave Spurs a 2-0 win that briefly sent them top of the table and dropped City to 11th place. There has been a staggering 22-point swing in City’s favour since then.

Pep Guardiola’s side subsequently embarked on a 22-game unbeaten run in all competitions, including 10 successive league victories that have helped them establish a five-point lead over Manchester United. By contrast, Spurs have taken just 16 points from a possible 39 since defeating City and fallen to eighth place, lowering their sights from a title tilt to a top-four scrap.

Last weekend’s 2-0 win over West Bromwich Albion ended a damaging spell of three consecutive defeats, but Mourinho finds himself requiring to orchestrate another one of his tactical “masterclasses” to ease mounting pressure on his position. How did it come to this so soon?

The ebb and flow of Mourinho’s 16 months in charge of Tottenham is inextricably linked to injuries. Prior to lockdown last March, Spurs’ season was unravelling at an alarming rate with Son, Harry Kane, and Steven Bergwijn all sidelined as they exited the Champions League and the FA Cup inside 10 days, with Lucas Moura forced to play as an emergency striker.

The three-month hiatus caused by COVID-19 benefitted Spurs in the context of recovering these players to rally with a strong finish that secured Europa League qualification, creating a positive momentum that continued into the summer with Pierre-Emerick Hojbjerg, Carlos Vinicius, Gareth Bale, Matt Doherty and Sergio Reguilon added to the squad.

Mourinho hailed chairman Daniel Levy’s work in the market on more than one occasion, particularly during the formative weeks of this season during which Spurs topped the table with a fine 11-game unbeaten league run, the apotheosis of which came against City. Almost any team would struggle if robbed of two of their best players, but the extreme reliance Mourinho has on Son and Kane was exemplified that day and with what followed. Spurs had four shots in 90 minutes against City, scoring with their only two on target. Tanguy Ndombele fed Son for the first, and Kane played in Lo Celso for the second.

Son was outperforming his expected goals (xG) to a frankly ludicrous level; the same is true of Kane and his expected assists (xA). Statistics compiled in early January showed that Son’s 61 goals for Spurs to that point came at a rate of 44% above his xG — the highest differential in world football. Next best was Kane, whose 104 goals in the same period were 21.33% above his xG.

The success of Mourinho’s plan to prioritise defensive stability depends on Son and Kane maintaining such stunning numbers, punishing opponents on the counter-attack with optimum efficiency. Therefore, their absence is more keenly felt, as has been the case when Kane left the pitch at half-time against Liverpool on Jan. 28. Spurs lost that game, and the two matches that followed, with insipid displays bereft of any real potency. Son looked lost without his partner in crime. Mourinho tried to change things with Bale, a different profile to Kane, drafted in at Brighton & Hove Albion but then switched to asking Carlos Vinicius to play in the same mould as Kane against Chelsea. Neither was successful, and Kane was rushed back for Sunday’s 2-0 win over West Brom, in which he and Son both scored.

Normal service, then, was resumed. Mourinho will hope the knock-on effect is that his defenders refocus their efforts to cut out the individual mistakes that have cost them in recent weeks, knowing they’ve got enough potency at the top end of the pitch to snatch a goal if they stay in the game. Wednesday’s FA Cup fifth round exit to Everton, 5-4 after extra-time, suggests there is still a long way to go in that regard, but Spurs will surely target greater discipline at the Etihad Stadium.

Mourinho’s lack of an alternative plan was exposed in Kane’s absence, just as it has been when they have fallen behind or conceded in matches even with the England captain on the pitch. Too often, they have been passive even when in the lead, trying to see out games rather than pursuing a bigger advantage.

Steve Nicol believes Man City are showing loads of belief in their defence during their record win streak.

Meanwhile, Guardiola went about things very differently. He signed a new two-year contract extension in the days before City lost at Tottenham in September. A major rebuild appeared ahead with Sergio Aguero fighting ongoing injury problems, Gabriel Jesus ineffective, David Silva’s departure keenly felt and a leaky defence. Kevin De Bruyne still held the conductor’s baton, but the orchestra was missing too many parts. Yet their transformation has been remarkable since that day in north London. They are yet to lose since in 22 games across all competitions, keeping 16 clean sheets in that time and setting a new record for an English top-flight side of 15 consecutive victories with Wednesday’s FA Cup win at Swansea.

Ruben Dias, a £65 million acquisition from Benfica in September, has few rivals for the signing of the season, forming an extremely assured partnership with the rejuvenated John Stones at the back. But Guardiola, often criticised for over-complicating his approach in certain games, deserves great credit for the tactical alterations that have seen City thrive without Aguero and, arguably as impressive, bereft of De Bruyne who for so long was carrying the creative burden almost by himself.

Guardiola’s use of full-backs coming into midfield positions is no surprise, but Joao Cancelo has thrived in the role, freeing up Ilkay Gundogan to push forward and add goals to his game from midfield. With nine to his name, has already scored twice as many goals as in any previous Premier League season.

Either with Jesus, a false No. 9 or Phil Foden and Bernardo Silva playing a strike duo in the second half of their 4-1 win at Anfield last weekend, City have rediscovered their ability to overwhelm teams with a blur of movement and magic. There is a bravery about them again which is now being rewarded. Guardiola cited a desire at Anfield to shorten their passing to avoid being caught by “the best team in the world on transitions.”

Spurs will pose a very similar threat on Saturday at the Etihad Stadium. This will be the 25th meeting between Mourinho and Guardiola. Mourinho has seven wins, Guardiola 11. The 26th will come at Wembley in April when Mourinho aims to end Tottenham’s 13-year wait for a trophy in the Carabao Cup final, a match he is already pointing to in rebuttal to questions over his future. He needs Spurs to produce a more immediate answer this weekend.

Where is my tax refund? How to check the status after filing your return