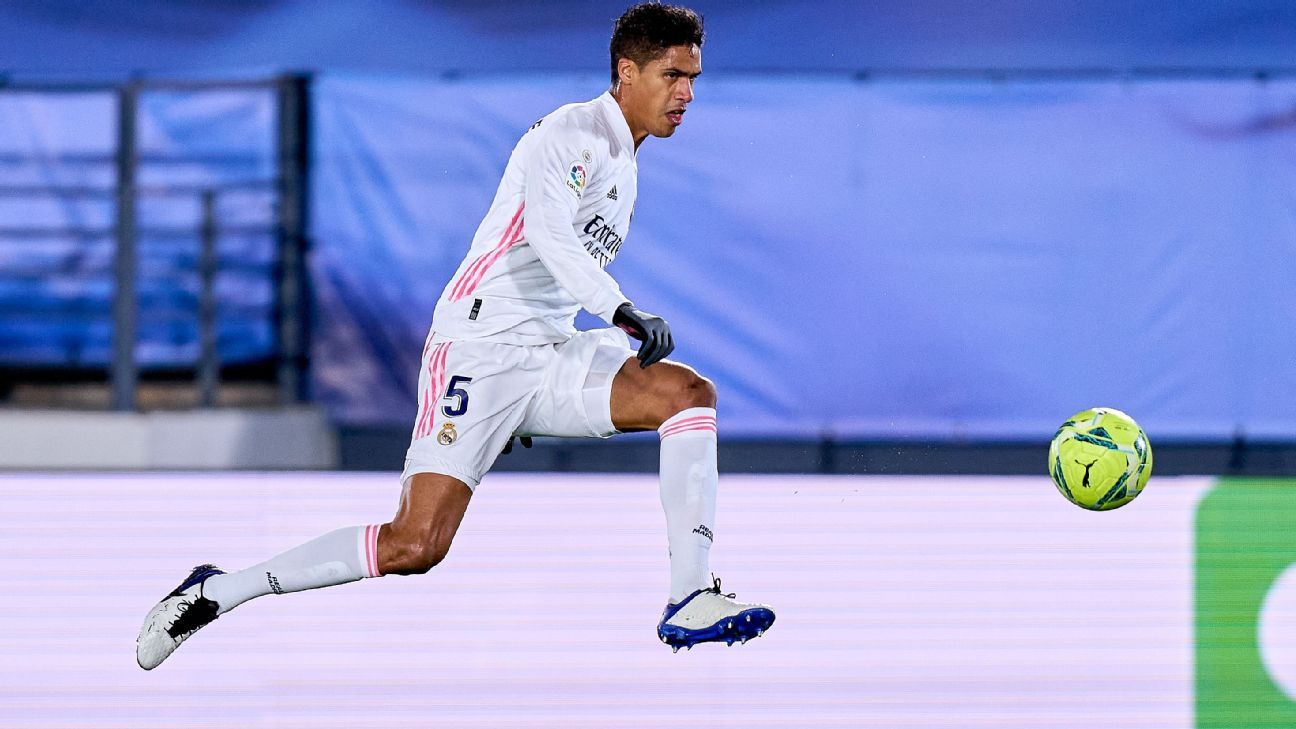 
Manchester United are targeting Real Madrid’s Raphael Varane, among others, to sort their leaky defence — ESPN’s Insider Notebook has the latest. PLUS: Barcelona search for the next Christian Pulisic.

Solskjaer is keen to bring in a partner for captain Harry Maguire, who cost £80 million from Leicester in 2019, with Sevilla’s Jules Kounde, Aston Villa’s Tyrone Mings, Raphael Varane at Real Madrid and Braga’s David Carmo the names on his shortlist. RB Leipzig defender Dayot Upamecano is also a target but there are fears among United’s recruitment team that Bayern Munich are a step ahead in the race for his signature.

Solskjaer will keep Victor Lindelof and while he is a fan of Eric Bailly, he has concerns about the Ivory Coast international’s injury record. Bailly has impressed alongside Maguire but hasn’t played since the 2-1 win over Fulham on Jan. 20. He has only surpassed 20 appearances in all competitions in one of his four full seasons at the club.

Varane’s future at Real Madrid is in question with the French defender out of contract in 2022. Sevilla’s Kounde, 22, is rated as one of the best young defenders in Europe and was on Manchester City’s shortlist before they signed Benfica’s Ruben Dias. Liverpool were keen to sign Portugal youth international Carmo, 21, on deadline day but could not reach an agreement with his club, SC Braga.

Solskjaer has been promised money to spend to strengthen the squad in the summer but the United boss has also been told the club will continue to be cautious with their finances while the coronavirus pandemic is ongoing.

Sources told ESPN that United have also not given up on signing Jadon Sancho, although they remain firm in their stance that Borussia Dortmund would need to drop their £120m asking price. — Rob Dawson

Barca step up hunt for next Pulisic, Hoppe

Barcelona have upped the surveillance of their flagship academy in the United States in a bid to find the next U.S. star to break into their first team.

Matthew Hoppe became the latest graduate from Barca’s Residency Academy in Arizona to make his mark in the professional game when he scored a Bundesliga hat trick in January. The Californian, 19, signed his first professional deal with Schalke this month.

He’s not the only player from the academy, which launched in 2017, to step into the professional game. Julian Araujo (LA Galaxy), who has already been capped by the United States, is another player to come through the ranks, along with Caden Clark (New York Red Bulls), Bryce Duke (Los Angeles FC) and Amadeo Chapru Tate (Leganes).

Given the rate at which players are progressing, Barca have decided to work closer with the academy in the hope of finding the next Sergino Dest or Christian Pulisic. USMNT’s Dest signed for Barca for €21m plus €5m in potential add-ons last summer while international teammate Pulisic has impressed in the Premier League after joining Chelsea from Borussia Dortmund.

In partnership with Grande Sports World, Barcelona have also increased their investment in the Arizona school and want to ensure no one slips through the net.

Barca have 49 soccer schools around the world as part of their Academy project but the Arizona Residency’s reputation is second only to La Masia and the club hope the relationship with Grande Sports World can further their development of talent in the U.S.

As part of the changes to the way the academy is overseen, players that aren’t picked up by professional teams will be given scholarships for colleges in the U.S to enable them to carry on their pursuit of a career in football alongside their education. — Sam Marsden and Moises Llorens

The 17-year-old forward’s representatives fielded enquiries from some of Europe’s biggest clubs before the player agreed professional terms with United on Monday.

Shoretire was convinced to commit his long-term future after conversations with manager Ole Gunnar Solskjaer and head of first team development Nicky Butt, who highlighted the progress of fellow academy graduate Mason Greenwood under his watch.

Shoretire, who has scored five goals for the Under-23s this season, has started training with the first-team and has been earmarked for a senior debut in the next 18 months.

Plans to hand youngsters experience in the Europa League this season have been complicated by strict coronavirus protocols that prevent players from different bubbles mixing easily, with United’s first-leg clash against Real Sociedad in the Europa League round of 32 moved from Spain to Juventus’ Allianz Arena. — Rob Dawson

Craig Burley was left unimpressed by Manchester United despite their win in extra time vs. West Ham.

Victor Font’s chances of becoming president of Barcelona have been dented after Jordi Cruyff — the man he will appoint as the club’s sporting director if he’s elected — said his father Johan would vote for rival Joan Laporta.

Font’s campaign has been built around the return of Xavi Hernandez and to a lesser extent, the hiring of Cruyff. He is the head coach of Chinese Super League club Shenzhen FC.

Along with Carles Puyol, Xavi and Cruyff are two figures capable of tipping the election one way or the other, but sources confirmed to ESPN none of them will side with any of the candidates. They all expect to return to Barca one day and don’t want to limit themselves by explicitly linking themselves to one campaign.

Despite that, Cruyff tipped the balance in Laporta’s favour by offering him his late father’s support ahead of the election on March 7.

“I’m sure my dad would vote for Laporta,” Cruyff said. “Ex-players and players all speak well of him and that is not easy. Xavi himself even said that Laporta was the best president he ever had.”

Johan Cruyff, who passed away in 2016, earned legendary status at Barca as a player and then as the manager of the “Dream Team,” leading the club to their first European Cup in 1992. The club have adhered to his philosophy ever since.

Laporta has chosen not to use any names to boost his campaign, while Font has spoken regularly about Xavi and Cruyff’s involvement in his project. He has earmarked a general manager role for Xavi with him eventually taking over as coach and said he will resign on the spot if he’s elected and Xavi doesn’t return to Barca from his coaching role in Qatar. — Sam Marsden and Moises Llorens

The Premier League has been warned it risks colour blind fans turning away from the game unless sweeping changes are made to avoid confusion that has caused hundreds of complaints this season.

Kathryn Albany-Ward, the Colour Blind Awareness CEO, told ESPN in January the organisation was inundated with complaints from fans who could not tell Liverpool and Manchester United apart in their 0-0 draw at Anfield. United wore a green change strip while Liverpool wore their traditional red. Last week, Chelsea wore their light-coloured blue away shirt for their win at Sheffield United, despite the fact their home shirt would have been a more logical choice against Sheffield United’s red and white stripes.

Sources told ESPN that the Premier League uses computer software to ensure that all fixtures are played with clubs wearing identifiably different colours. The software has recently been updated to include a “colour blind friendly flag” to ascertain the best kit combinations for individuals who are colour-blind.

But Albany-Ward says more should be done to accommodate those who struggle to tell teams apart when their kits clash.

“If fans can’t tell the teams apart this affects revenue, switching off TV coverage or deciding not to pay-per-view in case of a clash,” Albany-Ward told ESPN.

“Regulations already state kit clashes should be avoided but because people enforcing them don’t understand colour blindness, the regulations are not being enforced properly. With regulations tweaked and properly enforced, sponsors and suppliers would also need to ensure they aim to avoid kit clashes in future.

“I think there is a lot of apprehension of raising this topic. The people at the coalface I talk to understand the problem. But they don’t want to upset the higher echelons of sport in case it might put sponsors or broadcasters off. They are frightened of addressing the issue because of the potential impact on them and how they might be perceived. Fear is stopping change happening.

“The more elite players who speak out, the faster changes will be made. Colour blind elite players [should] speak up because they are affected, or other players their behalf.”

Colour blindness (also known as colour vision deficiency) is a genetic condition which affects approximately 1 in 12 men and 1 in 200 women in the world. While there is an extremely rare version where people can’t see colour at all, most sufferers will still be able to see colours but will confuse different shades. The most common type is “red/green colour blindness” which affects the spectrum containing those colours. — Lewis Holman

Arsenal legend and former New York City FC boss Patrick Vieira is on a three-man shortlist to take over as manager of Championship side Bournemouth, sources told ESPN.

Vieira won the World Cup with France in 1998 as well as three league titles at Arsenal, and most recently managed Nice in Ligue 1. The 44-year-old also enjoyed a productive spell in Major League Soccer, steering New York City to their first ever playoff appearance after finishing second in the Eastern Conference in 2016.

Sources told ESPN that Vieira’s dream is to manage in England, ideally in the Premier League, but he would be prepared to step down a level to the Championship to begin with. Bournemouth are without a manager following the sacking of Jason Tindall, with the club sixth in the Championship.

Sources added that the Bournemouth job appeals to Vieira as he believes the squad is good enough for an instant return to the Premier League, and that the club is the right fit as he continues developing his coaching career. — Julien Laurens

Julien Laurens provides an update on the injury Neymar sustained during PSG’s 1-0 win vs. Caen.

Thierry Njoh-Eboa hoped to play from the start in Louhans-Cuiseaux’s French Cup match at Belfort last Sunday … before his club accidentally left him at a motorway service station.

The French fourth division side made the three-hour coach trip from Louhans to Belfort and two hours into the journey, stopped for a break. Njoh-Eboa joined his teammates as they went for a walk, a toilet break and to get some refreshments for the remainder of the journey. But when Njoh-Eboa returned, to his horror the coach had left for Belfort without him.

To compound matters, the left-back had left his mobile phone on the coach, so could not call his teammates. He had to stay at the service station and hope that sooner rather than later, they would realise he was missing.

Alas, the team only realised their starting defender was not there when they arrived in Belfort for the match, before sending a car to rescue him at Besancon-Marchaux services where he had waited for over an hour.

Njoh-Eboa arrived at the match and sat on the bench, before coming on for the final 30 minutes. The story has a happy ending, though, as his side won to reach the last 16 of the cup. And after the game, he was the first player to get back on the coach… — Julien Laurens

Martin Gugino: Charges dropped against US officers who pushed protester