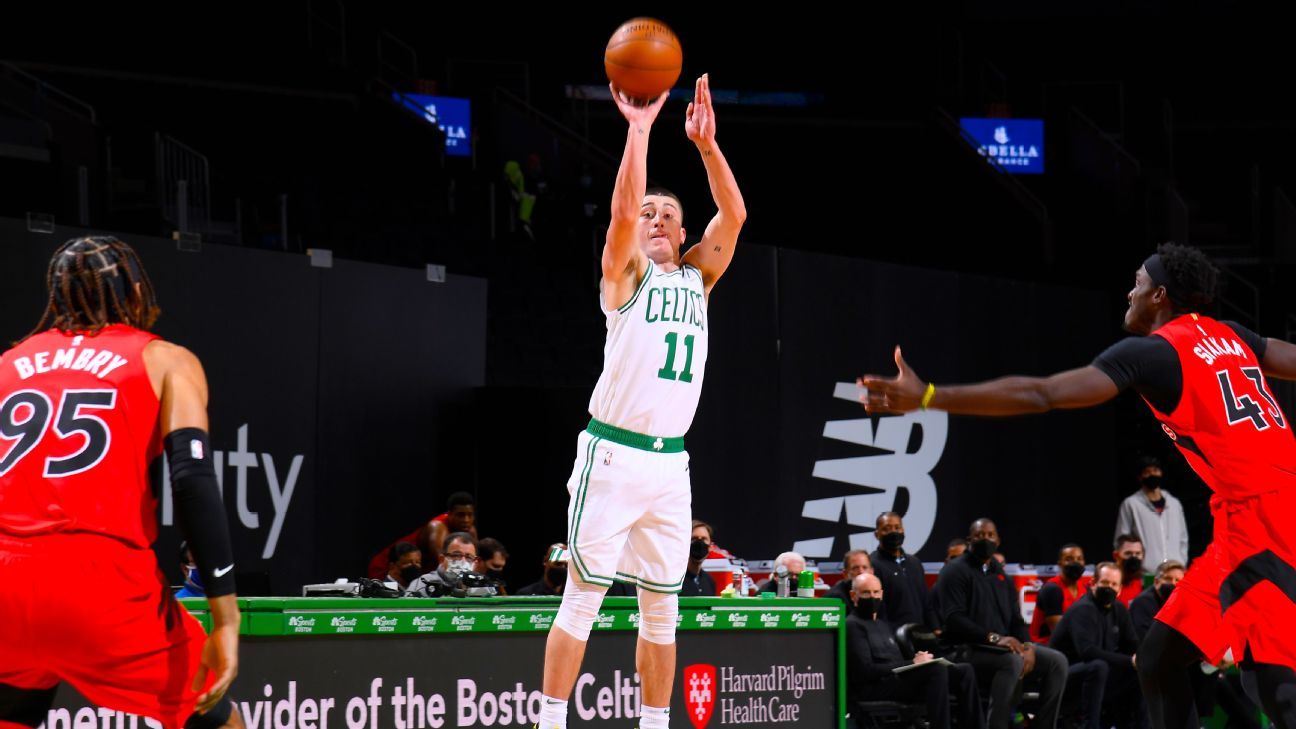 Boston Celtics president of basketball operations Danny Ainge grew up in Eugene, Oregon, and after a stellar four-year career at BYU, made his living over his 14-year NBA career as a tough, hard-nosed guard who could shoot.

Decades later, Ainge fell in love during the draft process with another Oregon kid. And while rookie Payton Pritchard didn’t go to Ainge’s alma mater, he did have a decorated four-year career at the University of Oregon and possessed an NBA-quality jump shot like Ainge did.

That led Ainge to draft Pritchard with the 26th pick in this past November’s NBA draft, a selection that he and the Celtics likely hoped could become a small part of coach Brad Stevens’ rotation this season. Instead, Pritchard has become a vital part of Boston’s hopes of making another deep playoff run.

Thursday night against the Raptors, Pritchard showed why, scoring 20 points while going 6-for-8 from 3-point range to help the Celtics beat the Toronto Raptors 120-106 on a night when the team’s two stars this season, Jayson Tatum and Jaylen Brown, combined to shoot 8-for-27.

“They draw such a crowd, so they’re going to have to draw a double-team or something,” Pritchard said afterward. “So it’s our job to space the floor and find openings for them.”

As a four-year college player with a deft shooting touch, Pritchard certainly fit the mold of the type of player capable of making an early impact in the league. Still, it’s a high bar for a rookie to walk into a team with championship aspirations, like Boston, and become an essential part of the team’s rotation. Fellow rookie Aaron Nesmith, for example — the 14th pick in the 2020 draft — has hardly played at all.

Pritchard, on the other hand, is now clearly the team’s sixth man. He has played in every game when healthy this season — and for more than 10 minutes in every game but the one in which he suffered an MCL sprain against the Philadelphia 76ers on Jan. 22. Even with those missed games, he has made more 3-pointers than all but Tatum and Brown on the Celtics this season, while his 46.9% clip from behind the arc has him second only to Memphis’ Desmond Bane (48.2%) among rookies taking at least three triples a game, and 10th among all players who have taken that many per game this season.

And while he acknowledged Pritchard isn’t expected to make six 3s per game, Stevens said he could tell right away the rookie had a chance to make an impact this season.

“Before training camp started,” Stevens said. “[The draftees] came a couple days after the draft, and after some testing were able to do small group work, and you could tell he was pretty advanced.”

Part of what has made Pritchard so important is the lack of options around him on Boston’s bench. No one questions the Celtics’ top-end talent on the perimeter, between Tatum, Brown, Kemba Walker and Marcus Smart (who is currently out with a calf strain).

Behind them, though, the options are limited. Jeff Teague was signed to be the team’s primary backup point guard, but after scoring 19 points in the Celtics’ opening game of the season, he has shot 30% from the field (including a ghastly 28% on 2-point shots) and was dropped from Stevens’ rotation, with Pritchard taking his spot as the first guard off the bench.

While Semi Ojeleye had a career-high 24 points Thursday, including his own 6-for-8 performance from 3-point range, that is far from a common occurrence, as he’d entered Thursday making less than one 3 per game. Boston’s other usual rotation players off the bench — Tristan Thompson, Grant Williams and Robert Williams — all bring varying skill sets, but none can be counted on for instant offense.

Arguably no one else on the team can come in and provide that instant offense like Pritchard did Thursday — and has done all season. And while he was an accomplished point guard at Oregon, playing on a Boston team with Walker, Tatum and Brown has allowed Pritchard to slide in perfectly as an off-ball player whose shot opposing defenses have to respect. He gives the Celtics’ primary scoring options vital room in which to operate and has being good enough defensively to hold his own.

And, in a game when Tatum and Brown missed 19 shots, that spacing — and the hot shooting of Pritchard, Ojeyele and Walker — who went 5-for-8 from 3-point range — allowed them to rack up 19 assists.

Questions will continue to linger about Boston’s depth. While Pritchard has clearly established himself as the team’s primary guard off the bench, and Boston’s quartet of big men — Daniel Theis, Thompson and both Williamses — will play a role, the team still has no depth behind its trio of wings in Tatum, Brown and Smart.

Courtesy of both the $28 million trade exception created by Gordon Hayward’s departure this offseason and its status as one of the few contenders that has control of its first-round picks moving forward, Boston has the ability to add a piece between now and next month’s trade deadline. And, with the East looking wide-open at the moment, such a move could allow the Celtics a chance to finally break through and return to the NBA Finals after reaching the Eastern Conference finals in three of the past four seasons.

Pritchard’s play, however, has helped ease some of the concerns about scoring coming from outside of Boston’s top options. As a result, less than two months into his rookie season, Pritchard has made Ainge look prescient for betting on another four-year college kid from Oregon.