This is one of the fastest growing jobs at Walmart 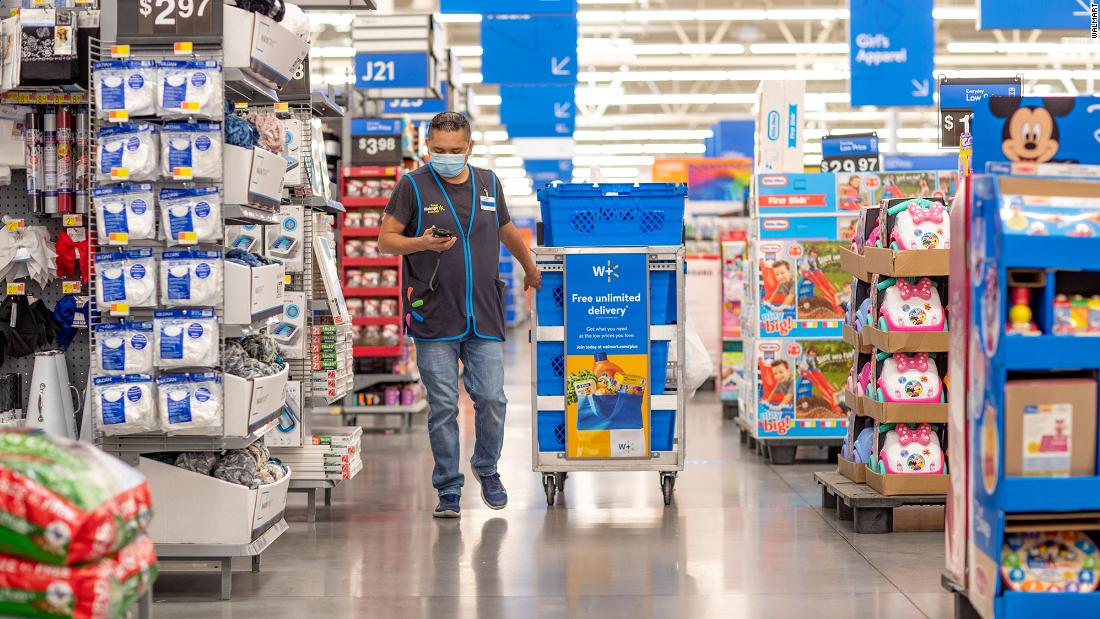 The employees are called personal shoppers — and their ranks are skyrocketing. Walmart (WMT) says it now has more than 170,000 of these workers in stores, more than double the number in the position last year and larger than Macy’s (M) entire workforce.
A surge in online shopping is expected to permanently alter the retail workforce as major chains turn their stores into warehouses to fulfill digital orders. Jobs dedicated to online fulfillment are hardly a new concept. But now, they’re becoming more widespread. Stores from Target (TGT) to Bed Bath & Beyond (BBBY) are adding similar positions to Walmart’s personal shoppers to compete with Amazon. Using their stores as warehouses enables them to get orders to customers faster and save on shipping costs.

That means Walmart, already the largest retailer in the United States, with around 1.6 million workers, needs to hire staff for that purpose—and is willing to pay higher wages for it. The personal shopper job starts at more than $13 an hour, higher than Walmart’s $11 minimum wage. The position also includes workers who assemble customers’ orders and haul them out to cars.

But the higher pay can come at a cost, according to interviews with Walmart personal shoppers and labor experts. The jobs are more high-pressure and physically taxing than the average retail sales associate job, they said. Some workers said they struggle to handle the deluge of orders they face daily.

When Drew Board started as a personal shopper last year, his store in Salisbury, North Carolina would fulfill up to 90 online orders a day. Now it is up to 200 orders. The increase in orders has led to more heavy lifting, which has “taken a toll” on him “because it’s a very physical job,” said Board, 23, who is affiliated with United for Respect, a workers’ advocacy group. Additionally, he said, his team isn’t “adequately staffed,” so he and others have to pick up the slack.

Board said he’s seen some customers order up to $500 worth of goods.

“I’ve had some orders where I’ll go out there and I’ll fill an entire truck bed up with beer and soda and water, and that’s just their whole order,” he said.

Walmart declined to comment on individual workers’ accounts of the job, but said in an emailed statement that “no retailer is immune to the demand from the pandemic.”

The company added: “We’re proud of all our associates who have stepped up to serve customers in a time they’ve needed them most.”

Walmart said in the statement that personal shopper jobs are “some of the most sought-after roles” in stores for both existing and new workers. Around 40% of new personal shoppers the company has brought on since last March were existing employees, according to the company. “We’ve found [personal shoppers] stay because the job is fulfilling, and they see opportunities for growth and advancement in the company.”

High stakes and a fast pace

Employees and labor researchers interviewed said the stakes are high as Walmart tries to make online ordering faster and more convenient for its customers. A key feature of Walmart+, the membership program Walmart rolled out to take on Amazon Prime, is same-day delivery from stores. Walmart has also introduced “Express Delivery” service through which customers can pay an extra fee to get orders delivered from stores in under two hours.

Walmart’s online sales, which include pickup and delivery, climbed 79% during the three months ended October 31 compared with the same stretch last year.

“The company wants you to get as many [orders] done as possible. You are under pressure to work quickly and not make any mistakes,” said Kate Bronfenbrenner, the director of labor education research at Cornell University’s School of Industrial and Labor Relations.

Four workers, who spoke on the condition of anonymity because they were not authorized to talk to the media, said they are having trouble keeping pace.

One Walmart worker in Chicago who was hired as a personal shopper in August said he and his team were struggling to handle the flood of orders, especially at rush hour. He said his manager expects workers to pick up to 200 items an hour.

Managers at Walmart can see how many items workers pick each hour — known as their “pick rate” — because workers scan barcodes on products when they select them, the workers said. Walmart said in an email that tracking pick rates helps “improve the personal shopper experience.”

“It’s been forced down people’s throat that they have to be fast,” said the worker. If customers have to wait more than five minutes for their curbside pickup orders in the parking lot, he said, he is verbally reprimanded by a supervisor.

Workers are moving so fast, he said, they often aren’t checking expiration dates on perishable food. “We get so many calls about expired items or produce that has gone bad because people are scared to slow down.”

Bottled water and cans of soup

A worker in Flint, Michigan, said the personal shopper job was “chaotic” and “overwhelming” as workers scrambled to assemble customers’ orders in the backroom of his store, bag them up and double check to make sure there aren’t any items missing. And space in the backroom is limited, he said, so it’s hard to maintain social distancing, especially as new orders pile up.

One personal shopper in Erie, Pennsylvania, also said that customers have been buying bigger orders and stocking up on goods such as bottled water and canned soup because of the recent spike in coronavirus cases. This has made it more taxing to bring orders out to customers’ cars and slowed down the process, they said.

One employee said she liked the pace. Cally Wolfe, 30, a personal shopper at a Walmart in Lumberton, Texas, also said she and her team had been handling more orders lately because of the spike in online shopping during the pandemic.

She carries around a handheld, palm pilot-like device — a “TC70” they’re called— which tells her what each order contains and where in the massive supercenter the products are located.

“We’re busy all day, from the time we get here to the time we go home,” said Wolfe, who moved into the role in July after working in a Walmart warehouse. “It makes your day go by fast. And me, personally, I enjoy it.”

Aside from working non-stop, personal shoppers have to deal with another reality different from most other store jobs: little to no customer interaction.

“Customer interaction has always been two-edged. It’s been a source of frustration, but also a source of gratification,” said Françoise Carré, research director at the Center for Social Policy at the University of Massachusetts Boston and co-author of a September report on the future of retail jobs. “Here, you have the tediousness and the pressure, but you don’t have any gratification in terms of interpersonal contact.”

A Walmart worker in Dallas said the personal shopper job “feels like you’re a robot because you’re not doing anything but fulfilling orders.”

Tedious or not, the personal shopper roles are jobs in a pandemic. And Walmart doesn’t expect the growth to stop.

The personal shopper job has “grown tremendously. And it’s grown in line with the way that customers want to shop,” Tom Ward, Walmart’s US senior vice president of customer product, said in an interview with CNN Business in December. Online grocery shopping “doesn’t look to be any less popular, so it continues to be super high demand.”

Bitcoin: What you need to know