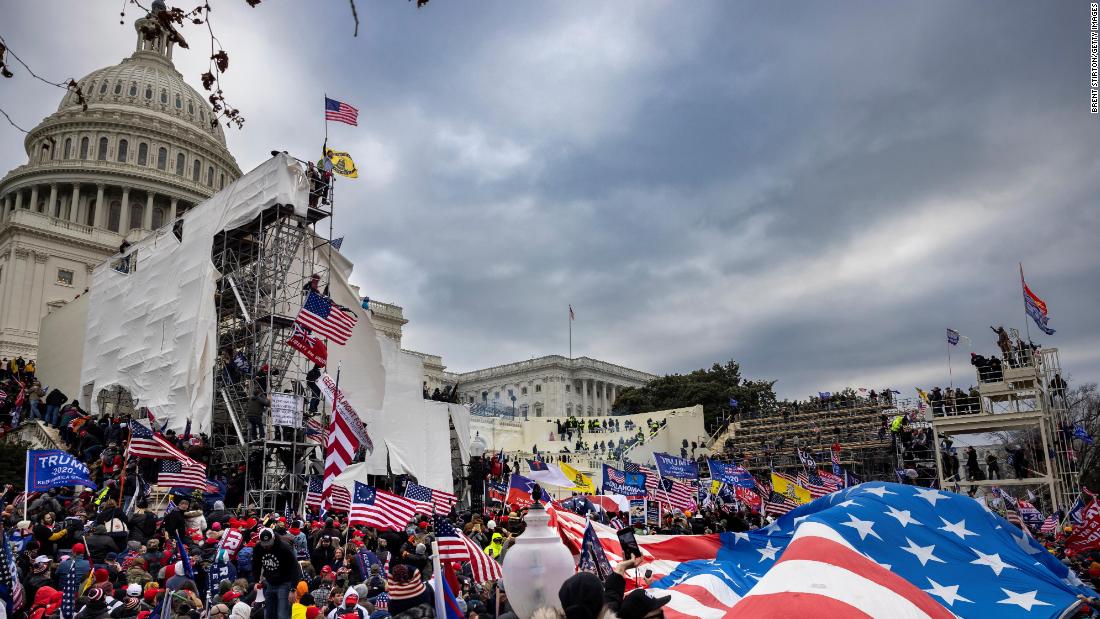 More than an hour into the lengthy hearing, Thomas Caldwell pleaded personally with the judge in an unusual exclamation that drew protests from his defense attorney.

“Your honor, these things are taken out of context!” Caldwell said, interrupting Judge Amit Mehta as the judge read through messages that Caldwell had allegedly exchanged about readying weapons ahead of the Capitol protest.

“My life hangs in the balance!” he said.

Caldwell, a Navy veteran, was arrested last month and later charged as part of the first significant conspiracy alleged by the Justice Department as it investigates the events surrounding the insurrection.

In court documents, authorities have laid out his efforts to mobilize friends and other self-styled militiamen to the Capitol to oppose the vote certification and accused him of planning potential violence.

According to prosecutors, Caldwell sent messages in late December and early January about organizing a “quick reaction force” and later shared maps of the area that directed that team to “the target.”

He also sent text messages to a person associated with another extremist group about a plan to ferry weapons across the Potomac River into Washington “if it all went to s–t” on January 6, according to a detention memo prosecutors submitted Thursday.

“I found this to be quite astonishing,” Mehta said Friday about the river plot.

“All of the evidence suggests that he presents a real danger. And that danger is not just to the community but also to the fundamental fabric of democracy that we all so cherish,” Mehta said.

More than a month after the insurrection, the Justice Department has pushed for many of the more than 200 people charged federally in connection with the mayhem to remain behind bars, citing their dangers to the community or a likelihood that they could flee or destroy evidence. Jessica Watkins and Donovan Crowl, two members of an Ohio militia who are included in the conspiracy charge with Caldwell, are both still in custody at different points of their cases.

All three alleged members of the conspiracy are connected to the Oath Keepers, a coalition of paramilitary groups with far-right views, although prosecutors have acknowledged that Caldwell did not actually pay dues to the group. Caldwell’s defense attorney has previously denied he is a member of the group.

Earlier in the hearing Friday, Caldwell pleaded not guilty to the conspiracy charges as well as charges of destruction of property and entering restricted grounds at the Capitol, among others.

In court, Plofchan diminished the Justice Department’s allegations that Caldwell had engaged in large-scale planning ahead of the insurrection, calling it “very imaginative and almost like a creative writing device” and arguing that the operational language was something his client used typically.

He also accused the Justice Department of cherry-picking from communications that Caldwell had made on the day of the insurrection, noting that the majority of them were messages sent to friends celebrating the massive protest. Caldwell isn’t accused of entering the Capitol, only trespassing on the grounds, and prosecutors haven’t said he was armed January 6.

Another piece of evidence — a note topped with the words “death list” — factored prominently into the hearing, although both sides argued over its meaning. The judge later called it “troubling” but added, “I don’t know what to make of this.”

The note, recovered from a desk in Caldwell’s home office during a search of his house, also included the name of an elections official who had received media publicity regarding a role in the 2020 elections, a federal prosecutor said in court Friday.

The elections official was not named, but Caldwell’s attorney later identified the person as working multiple states away from Virginia. There have been reports that the official was arrested for fraud, Plofchan said.

“There’s nothing that indicates there’s any direct threat by my client that’s not just reporting notes from a newscast,” Plofchan said.

Investigators in Washington have narrowed their focus in recent weeks on the preplanning carried out by some extremist groups like the Oath Keepers and the Proud Boys, another far-right group that has supported former President Donald Trump and his conspiracy theories about election fraud, ahead of the insurrection.

Deploying search warrants and examining seized electronic devices, prosecutors have put forward chilling details about the extent of these groups’ organization and arsenals.

Caldwell, for example, had invoices for more than $750 worth of ammunition and a gun built to look like a cell phone in his house, according to the detention memo.

When police visited Watkins’ house in mid-January, they found an apparent toolbox for rebellion, complete with a mini drone, pool cues cut down to baton size and a recipe for making a destructive device, prosecutors said in a filing Thursday.

In court Friday, the prosecutor expressed concern that if released, Caldwell could tamper with evidence in the case, and accused him of deleting Facebook messages and taking down photos from his social media accounts.

Caldwell is due back in court next month.

US to allow in thousands of asylum seekers waiting in Mexico