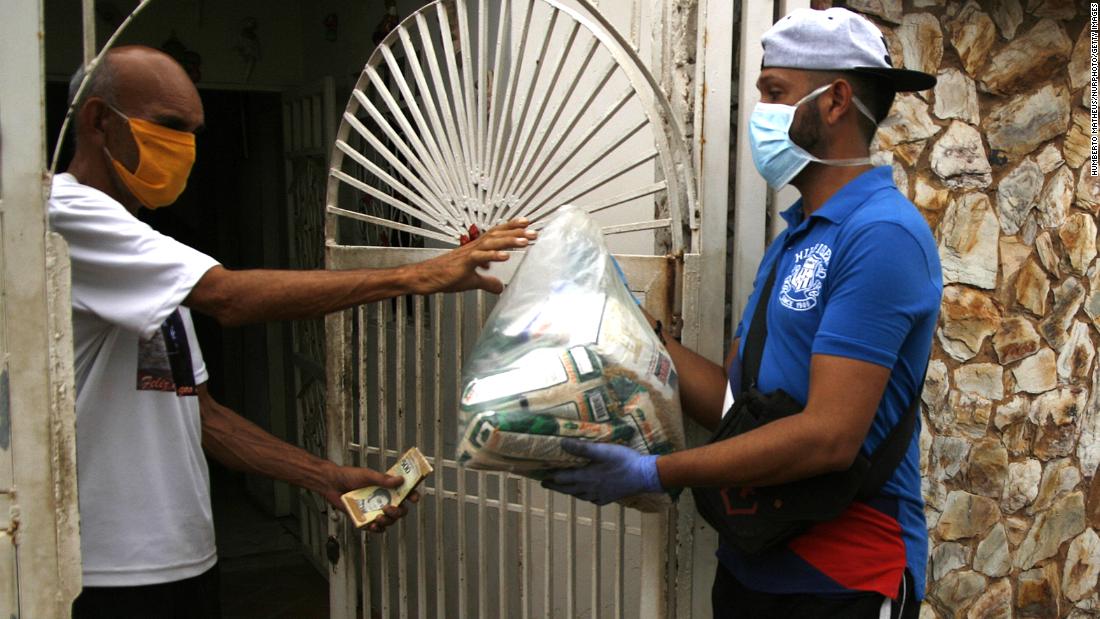 Her preliminary report, released Friday, painted a grim picture of a nation trapped with insufficient food or electricity, water rationing and little or no access to medicines and vaccines.

Venezuela’s state-controlled economy began to decline in 2014 with falling oil prices and has been corroded by mismanagement and corruption. By the time the US first imposed broad economic sanctions in 2017, Venezuela already had the highest inflation in the world and was experiencing chronic shortages of basic goods.

However, Douhan’s report emphasizes that existing “calamities” were exacerbated by “unilateral sanctions increasingly imposed by the United States, the European Union and other countries.”

Such sanctions, she said, wield “a devastating effect…on the broad scope of human rights, especially the right to food, right to health, right to life, right to education and right to development.”

More than five million Venezuelans have fled the country’s dire living conditions, according to the International Organization for Migration.

The effect of ‘maximum pressure’

The Trump administration dramatically expanded economic sanctions on Venezuela from 2017 onward, and was joined by other countries in piling pressure on the regime as National Assembly leader Juan Guaido challenged embattled President Nicolás Maduro.

Guaido’s movement has since lost steam, but broad sanctions remain, complicating the country’s access to basic medical and food supplies, despite exemptions for humanitarian needs.

“Impediments to food imports, constituting more than 50 per cent of food consumption, have resulted in the steadily growth of malnourishment in the past 6 years,” Douhan’s report reads, noting that hungry Venezuelans’ “coping mechanisms” include reducing their number of meals per day, selling household assets, and child labor, among other things.

The impact of trade sanctions is particularly felt today in the Venezuelan countryside, where agricultural activities have all but stopped since imports of diesel fuel dried up. Venezuela is still capable of refining limited amounts of normal gasoline but cannot refine diesel, used in heavy trucks and agricultural machinery. Many farmers have been forced to leave their fields unattended as their machinery stood still.

Douhan was particularly critical of sanctions directed at Venezuelan oil exports. Because Venezuela depends on oil exports, a US-imposed embargo since early 2019 has effectively strangled the entire economy and hamstrung any policy solutions.

She also called on the US, the UK and Portugal to release frozen Venezuelan foreign assets — estimated at $6 billion — so that Maduro’s government can purchase supplies needed to confront the Covid-19 pandemic.

Maduro and the US react

Maduro was quick to triumph in the report. Jumping on live television less than one hour after Douhan delivered her remarks, Maduro boasted, “We have denounced the illegal sanctions against the entire people of Venezuela and not only that, we also acted to mitigate the brutal impact these coercive measures had against our social, cultural, educational and economic life.”

But absent from his speech was any reference to Douhan’s appeals to his own government to facilitate the work of non-governmental organizations in Caracas, several of which have been heavily persecuted by Maduro’s state forces.

Re-elected under contested circumstances in 2018, Maduro has kept an iron grip on the country, and tolerance for political dissent is slim. The state’s feared Special Action Force, or FAES, has been linked to hundreds of alleged killings, and in September, a UN-backed fact-finding mission accused the government of committing crimes against humanity — claims Venezuela has denied or dismissed as biased.

Nevertheless, Douhan described the ultimate economic toll of sanctions on ordinary Venezuelans as unjustifiable, and noted that the US-led “maximum pressure campaign” also “violates the principle of sovereign equality of states and constitutes an intervention in the domestic affairs of Venezuela.”

“Humanitarian concerns shall always prevail on political ones,” she said.

A State Department spokesperson for the Bureau of Western Hemisphere Affairs told CNN that it welcomed UN examination of Venezuela but criticized Douhan’s fact-finding.

“We welcome United Nations examination and monitoring of the deteriorating situation in Venezuela. As recent reports from the Office of the High Commissioner on Human Rights have shown, human rights abuses continue to escalate at the hands of Maduro and his cronies.”

“Instead of meeting with NGOs, independent journalists, members of the opposition, political prisoners, and other victims of harassment and attacks directed by Maduro and his supporters, the UN Special Rapporteur visiting Caracas spoke almost only to regime insiders and others the regime authorized,” they said.

Douhan has said she “sought to meet the widest range of people to listen to their experience and insights,” including government officials and opposition figures in and outside of Parliament, as well as opposition leader Guaido. Humanitarian organizations and representatives from the church and civil society were also consulted, according to the report.

How Mike Pence became a villain in Trump world

He says Fidelity wouldn’t let him sell during Reddit mayhem, costing him $830,000