Denny Hamlin, Bubba Wallace and a chance at Daytona 500 history 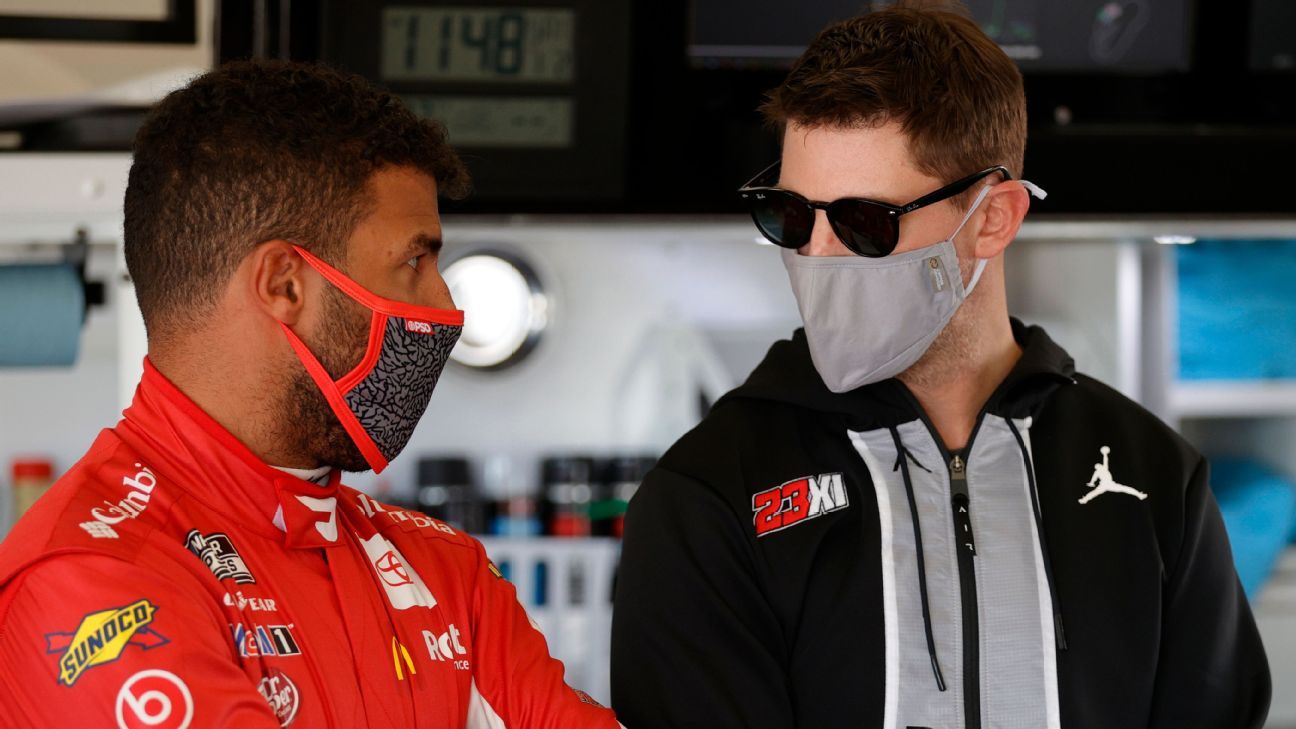 
DAYTONA BEACH, Fla. — They continue to tell us that scientists have yet to figure out how to clone human beings. Here at Daytona International Speedway, there is too much evidence to the contrary. That proof comes in the form of a man who seems to be in so many places at once.

He is driving a race car. He owns a race car, fielded by a new team and driven by Bubba Wallace. And when he isn’t talking with one of those two teams, he is answering questions about his new business partner, the other co-owner of Wallace’s ride.

Denny Hamlin’s in the No. 11 car. Hamlin has his head inside the window of the No. 23 car. Hamlin is on the phone with the greatest basketball player who ever lived. And he has done it all every single day during the biggest week of the NASCAR season. There is no way he could possibly be just one dude, right?

Hamlin, 40, is NASCAR’s Swiss Army knife. Team owner, businessman, sponsor spokesman, social media guru, dad and, oh yeah, he’s also a pretty good race car driver. He is in his 16th full-time season driving for Joe Gibbs Racing. Over the past two years, he has 13 wins, tied for tops in NASCAR’s Cup Series (with Kevin Harvick), and over that span he has led the series in top-five finishes (37 in 72 races), and is the only driver to make the championship final four in both years. He has 44 career wins, third best among active drivers, and three Daytona 500 victories over the past five years.

If he wins the Great American Race on Sunday, Hamlin will become the first three-peat champion in the event’s 63-year history. Cale Yarborough, Sterling Marlin and Richard Petty are the only other drivers to win two in a row. He is one of only four drivers to have his name engraved on the Harley J. Earl Trophy three times. Only Yarborough (4) and Petty (7) have more Daytona 500 victories than Hamlin.

“Mentioning my name with those names, in any context, feels completely crazy to me,” Hamlin said a year ago after his stunning .014-second victory over Ryan Blaney. “But to have it mentioned with them within the context of the Daytona 500, that’s not just crazy. That’s insane.”

Almost as absurd as his list of 2021 Daytona Speedweeks duties. He led the most laps in Tuesday night’s Busch Clash before finishing sixth, ran 11th quickest in Wednesday night’s pole qualifying session, and was making a run to the front of his Thursday night Duel 150 qualifying race before finishing 13th with an empty fuel tank. He also announced a new co-primary sponsor for his Cup ride, had a spirited social media debate with a fellow racer about the NASCAR team ownership business model and called out the short track racing industry for its continued insistence on making life and racing way too complicated.

He has also been running back and forth between every event and practice session from the car he drives to the car he co-owns, the new No. 23 Toyota Camry driven by Wallace. That team, 23XI Racing, has had an incredibly successful Speedweeks, as Wallace was fastest in Wednesday practice, qualified fourth, and had the lead in Thursday night’s second Duel 150 with the checkered flag in sight before losing to Austin Dillon by .057 seconds. He’ll start the Daytona 500 from the sixth position, 19 spots ahead of his boss.

That’s a fantastic trip to Daytona for any race team. But this isn’t any race team. This team didn’t exist less than five months ago, announced on Sept. 21. It entered the offseason without a crew or any race cars. Heck, it didn’t even have an office. While Hamlin made his November push into NASCAR championship finals as a driver, he also was looking at real estate documents and construction plans as a team co-owner.

And yes, his fellow co-owner is that former basketball player from North Carolina named Jordan. As Wallace was leading his Duel 150 in the closing laps, racer-turned-broadcaster Clint Bowyer shouted through our TV speakers what everyone in the Cup Series garage has been thinking all week and will certainly be asking on Sunday when it’s time for the Great American Race.

“Does anyone have eyes on MJ? That’s all I want to know! Has anyone seen MJ?!”

The Jordan Watch has had Daytona buzzing at a level not seen in 30 years, when Tom Cruise was in town shooting “Days of Thunder.” As race weekend arrived, His Airness hadn’t yet made an appearance at the speedway, but it hasn’t been hard to track his whereabouts. All one has to do is look in on local social media accounts.

“We’ve talked more the last couple of weeks, and he’s just excited,” Hamlin said of Jordan on the eve of Speedweeks. “He’s got a great team of people that I work with, who really gives us a lot of autonomy to make sure we’re doing stuff the way that we see fit.”

That starts with hiring the right people and buying the best equipment. Team 23XI (named for Jordan’s No. 23 and Hamlin’s No. 11) has a technical alliance with Hamlin’s employer, Joe Gibbs Racing, and Hamlin’s former JGR crew chief, Mike Wheeler, is calling the shots at the shop and the track. That’s a lot of good racing gear and a lot of racing smarts. But they have a lot of work to do. At the racetrack, that means getting pit stops up to speed with a group that is still getting to know one another. At the race shop, that means figuring out how to turn on the lights and where the bathrooms are.

The work is underway to build a solid foundation for the team’s — and Hamlin’s — future. Literally. The concrete floor for the new 23XI shop was poured just last month.

“My bosses are a three-time Daytona 500 winner and maybe the greatest athlete who ever lived,” Wallace said of Hamlin and Jordan. “My crew chief has already won a Daytona 500. I am going to listen to everything they have to say whenever they have to say it, no matter when that is.”

At Daytona this week, that’s been when the boss in the FedEx firesuit has jogged down from his garage stall to Wallace’s with questions and advice. But come Sunday, that conversation will stop. Hamlin is all about doing whatever he can to help his driver become the first Black driver to win a Cup Series race in nearly 60 years and the first to win the Daytona 500.

But if it comes down to battle between the driver/owner and the car he owns, Hamlin has some Daytona 500 record setting that he wants to take care of first, becoming the first back-to-back-to-back champion of NASCAR’s biggest race.

“I hope that I’m around at the end, that I give myself a chance to make history because ultimately, that’s what I’m here for,” he said. “Making history, doing something that no one else has ever done, that’s what motivates me to want to get this one.”

Myanmar coup: What will the military do now?