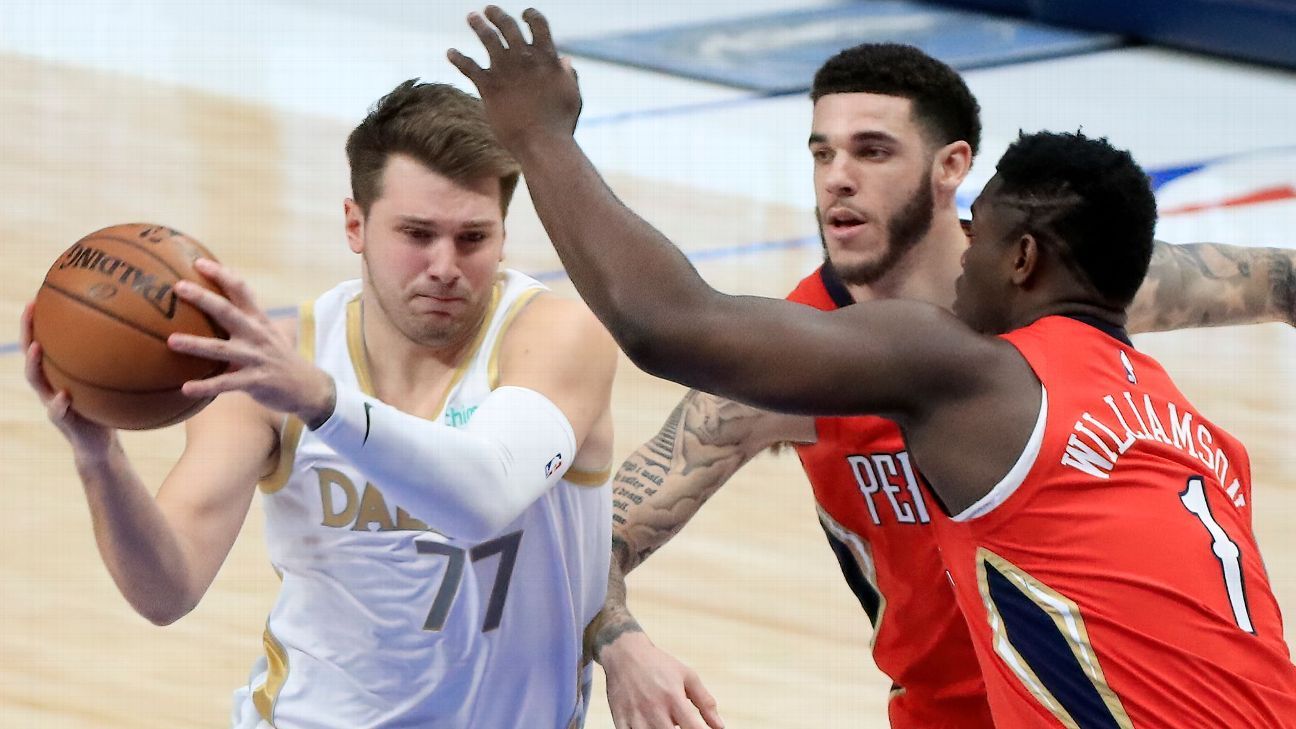 Three of the brightest young stars in the NBA put on a show Friday night as Luka Doncic and Kristaps Porzingis of the Dallas Mavericks and Zion Williamson of the New Orleans Pelicans posted an array of dazzling numbers.

Add in the Pelicans’ Brandon Ingram, who scored 30, and it was the first time in NBA history that four players age 25 or younger each had 30 or more points in a regulation game, according to Elias Sports research. Doncic and Williamson became the second pair of opposing players, each 21 or younger, to both score at least 35 in the same game. Kevin Durant (46 for the Thunder) and Eric Gordon (41 for the Clippers) did it on Jan. 23, 2009, also according to Elias Sports research.

Doncic, who had tied his career high with 42 points last Saturday in a high-scoring showdown with Steph Curry, became the fourth player with 45 points and 10 assists in a game at age 21 or younger, joining Trae Young, Isiah Thomas and Michael Jordan, according to Elias.

“Luka went on a run where he hit four or five, like, tough, contested 3-pointers,” Williamson said. “There’s not really a defensive scheme you can do for that. That’s a great player hitting tough shots.”

Doncic is the only player in Mavericks history with 40 points and 10 assists in a game — and he has done it eight times (seven regular season, one playoffs).

Doncic and Porzingis combined to score or assist on 103 points, and Doncic scored on all eight half-court defenders he faced. Porzingis was 4-for-5 (all 3-pointers) off Doncic passes. Overall, the Mavericks were 12-for-17 off Doncic’s passes.

“Tonight was one of those games where things were clicking for both of us, and he’s finding me open on the 3-point line,” Porzingis said. “It gives both of us energy and just builds the momentum for both of us and the team when we get going like that and we’re knocking down shots and making that extra pass. It just felt easy and natural. Not every game is going to be like that, but I believe that we’re on the right path.”

“They’re both great offensive players. They’re both very unique. They fit together extremely well,” Dallas coach Rick Carlisle said. “Their games complement one another very well. The chemistry tonight was tremendous. Balls were delivered on time, on target — people stepping into shots in rhythm. It was great stuff to watch.”

Doncic, who was born in Slovenia, and Porzingis, of Latvia, became the first teammates born outside of the United States to each score 35 or more points in a game. Their 82 combined points are the second most in history by a pair of teammates born outside of the 50 states and the most ever in a regulation game, according to Elias Sports research. (Tim Duncan and Tony Parker of the Spurs combined for 85.)

While he missed his one shot outside the paint, Williamson went 14-for-14 in the paint. The only player with more makes without a miss in the paint in a game over the past 25 seasons is Hakeem Olajuwon in 1998.

“Williamson was ridiculous. I mean, unbelievable what he can do on a basketball floor,” Carlisle said.

Williamson is the youngest player in NBA history with a game of at least 30 points on 90% shooting or better, surpassing Dwight Howard, according to Elias Sports research.

While all the gaudy numbers are fun for fans to look at, they figure to give both coaches nightmares as they try to coax some defense from their teams. The Pelicans allowed 50 3-pointers in their past two games, the most allowed by any team in a two-game span in NBA history. (In addition to the 25 made by the Mavs, New Orleans also gave up 25 long balls against the Bulls on Wednesday.)

“The ESPN crowd got a real treat tonight in terms of entertainment, but it was a pillow fight on defense,” Carlisle said.

Material from ESPN NBA reporters Tim MacMahon and Andrew Lopez, and ESPN Stats & Information was used in this report.