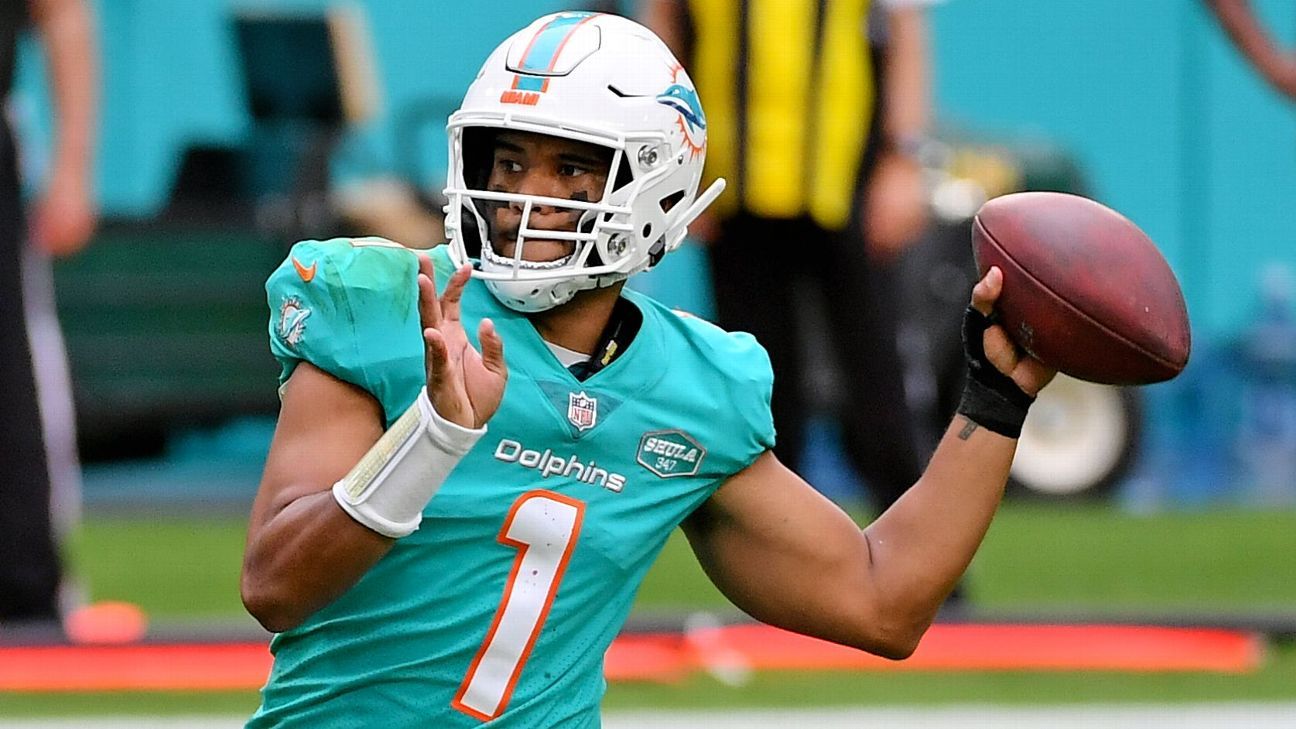 
DAVIE, Fla. — Tua Tagovailoa should be considered the favorite to be the Miami Dolphins’ starting quarterback this coming season. The Dolphins are serious about building around their 2020 first-round pick, but there’s one player who could be a plan-changer: Houston Texans quarterback Deshaun Watson.

Watson, 25, is the story of the NFL offseason — an unhappy but elite franchise quarterback who has asked for a trade. Texans general manager Nick Caserio is telling teams they have “zero interest” in trading their quarterback.

If things were to change, Miami is Watson’s preferred destination, sources told ESPN, thanks in part to the team culture coach Brian Flores is building, the Dolphins’ ascending roster and the fact there’s no state tax in Florida. Also, Miami has premium assets, including the No. 3 and No. 18 picks in the 2021 NFL draft to make a deal.

Like it or not Tagovailoa fans, the Watson trade talk isn’t going away any time soon. There’s no guarantee Miami will go all-in on Watson even if he is available, but it would be naïve to believe the Dolphins would not consider it; top-5 QBs rarely become available.

When asked about the Watson rumors, Tagovailoa said on ESPN’s Get Up! show: “I can only control what I can control. I am the quarterback for the Miami Dolphins.”

There’s a line of demarcation for Dolphins fans here, with some demanding Miami embrace Tagovailoa no matter what and others urging consideration of a Watson pursuit.

Let’s dig right in: Would Watson impact the Dolphins’ plan to build around Tagovailoa?

Trading a player such as Watson is practically unheard of, but perhaps the Dallas Cowboys trading running back Herschel Walker to the Minnesota Vikings in 1989, a deal that included three first-rounders, three second-rounders and players is the best example. While at the Senior Bowl, a league source told ESPN he would “eat his hat” if Caserio traded Watson given the QB’s talent as well as his familiarity with the GM’s resolve.

If the Texans give in and make Watson available, expect the cost to be historic. Three first-round picks and a young starting player would be a respectable opening offer, but it shouldn’t surprise if the ultimate price is four first-rounders.

A hypothetical Dolphins offer for Watson could be the No. 3 pick, No. 18 pick, 2022 first-round pick, 2023 second-round pick and Tagovailoa. The Texans could also push for the Dolphins to include All-Pro cornerback Xavien Howard, a Houston native who finished third in NFL Defensive Player of the Year voting and wants a contract adjustment. If Howard was included, perhaps Miami could include the No. 35 pick instead of the No. 18.

Despite Watson’s no-trade clause, the Texans don’t have to trade him, so that gives the team leverage in holding out for a Godfather offer.

Timing, however, is key if Miami gets involved. March 17 is the first deadline to monitor as teams will want to solidify their QB situation entering 2021 free agency, but most of the Dolphins’ premium assets are in the 2021 draft, while other likely suitors such as the New York Jets have two first-round picks in 2022. April 29 might be a final deadline to keep Miami in the mix on a potential Watson destination.

Tua Tagovailoa says he is focused on improving and isn’t letting the Deshaun Watson trade rumors get to him.

Case for building around Tagovailoa

This trend of casting final judgments on quarterbacks after one season — or in Tagovailoa’s case, nine starts — is disappointing at best and foolish at worst. As veteran quarterback Ryan Fitzpatrick told ESPN last week, the Dolphins drafted Tagovailoa in the top 5 last season because he has a rare skill set and Miami believed he would be the QB to lead it to a championship.

Significant offseason decisions behind the scenes have already been made with Tagovailoa in mind, multiple people within the Dolphins’ organization told ESPN. Decisions we’re aware of include Charlie Frye’s hiring as Dolphins quarterbacks coach and the co-offensive coordinator promotion of George Godsey and Eric Studesville.

The Dolphins have committed to Tagovailoa’s long-term development. Miami’s staff believes many of Tagovailoa’s rookie struggles are fixable with a full offseason with more reps, and the Dolphins are aiming to get explosive playmakers around him and banking on good chemistry with Godsey and Studesville.

Going all-in on Watson would start the clock on the Dolphins’ championship window, but would leave them with roster holes combined with the lack of elite draft capital to fix them. It would be a similar roster setup Watson had in his early Houston days when he topped out in the divisional playoffs. And, the decision to add Watson would be a big detour from the Dolphins’ largely successful rebuild plan.

Case for going after Watson

Watson, if acquired, would immediately become the Dolphins’ best quarterback since Dan Marino. ESPN NFL Nation picked 128 foundational players across all 32 teams last summer, and Watson went No. 4 behind Kansas City’s Patrick Mahomes, Seattle’s Russell Wilson and Baltimore’s Lamar Jackson. That would make Watson the NFL’s fourth most valuable player, and one could make an argument for higher.

Yes, there are plenty of reason to believe Tagovailoa will inch his way toward becoming an elite QB. But this is a quarterback league, and Watson has already established himself as a playmaking top-5 QB. It’s more comfortable to bet on the sure option rather than the potential.

If the Dolphins (10-6) maintain their top-5 defensive play from the 2020 season and add Watson, they would likely be vaulted to the top of the AFC. Miami would still fall behind Kansas City and probably Buffalo, but with Watson they would have a better chance to dethrone those two. Miami would then compare well on paper to Baltimore, Tennessee, Indianapolis, Pittsburgh and Cleveland.

And, Miami landing Watson would block the rival Jets from getting him, clearing an easier path to the AFC East crown.

If a team figures out the QB position along with having an ascending roster, the cost to get there is rarely remembered as being too high.

Steve Young and Booger McFarland break down how many quarterbacks being on the move can affect the league.

The Texans and Watson are at a standoff that could last months, all while the Dolphins are planning to build around Tagovailoa as of now. Those are the two facts we know.

Flirting with Watson would be more about the rarity of the situation rather than an indictment on Tagovailoa.

Nine starts coming off a serious hip injury is way too early to give up on Tagovailoa. Though Watson is tantalizing and would be an immediate upgrade, Miami doesn’t need him as much as other QB-hungry teams.

If the Dolphins believe Tagovailoa can lead them to a championship with more development and a better roster — and all indications are they do — they should keep their draft assets and stay the course.

Miami is in a win-win situation regardless of what happens next.

Myanmar coup: What will the military do now?

Covid: Oxford-AstraZeneca vaccine to be tested on children