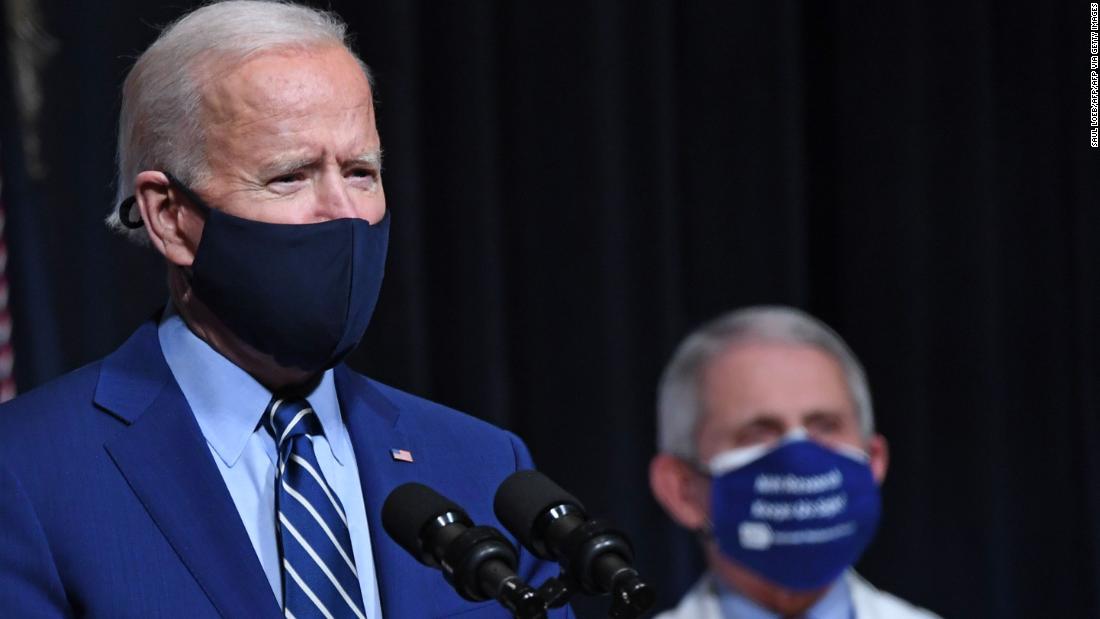 Biden has opted for a more measured approach than his predecessor, showing up to promote vaccine announcements and appearing at a vaccine site or a laboratory, but mainly saving the hard questions for his closed-door daily briefing on the pandemic.

That has left a gap in the messaging about how and when America might pull out of the crisis — and glosses over the challenge and exhortation that a president can uniquely deliver in times of national calamity.

Even one senior White House official, who spoke on condition of anonymity to be more candid, acknowledged in an interview with CNN that the public may not yet understand that the variants will require “more public involvement and sacrifice than people probably have registered in their own mind.”

Experts are also noticing missed opportunities for Biden to help the country rise to the challenge.

“This country’s really been in an abyss, and we’re trying to climb our way out,” said Laura Kahn, a Princeton University expert in leadership during epidemics. “A little bit more public communication would be helpful.”

Said another health expert, who is close to the White House: “They’re painting way too rosy of a picture.” The source, who requested anonymity to speak more frankly, added that the administration isn’t doing enough to sound the alarm about the threat of variants and the challenges that could lie ahead.

Administration officials have chafed at that criticism, insisting they are taking the variants seriously without inciting public panic.

Should officials “get up every morning and hold a press conference and say, ‘I’m absolutely terrified’?” said one senior administration official not authorized to speak on the record about the matter. “Do you want to sound the alarm and get everybody upset? Or do you want to do your job?”

Biden obliquely acknowledged the tragedy at hand this week in a visit to the National Institutes of Health.

“We’re in the middle of the war with this virus,” Biden said in that visit. “It’s going to take time to fix, to be blunt with you.”

But just how much time? It’s a question the Biden team doesn’t appear keen to tackle too directly. Even the administration’s health experts, tucked into their Zoom boxes for thrice-weekly updates, deliver scholarly assessments of where the US stands, offering little on the existential question of when life might return to normal.

There is no shortage of reasons why a leader might want to keep his or her distance from the details right now, given how volatile the situation is.

“As the President told the nation Thursday after visiting the vaccination center at the National Institute of Health, and as he says internally regularly, we are driving a whole-of-government response to the pandemic — guided by the science, by ambitious goals, and with clear public communication,” Andy Slavitt, senior adviser to the White House Covid-19 Response Team, said in a statement to CNN Friday. “This is a national emergency. Our focus is on vaccinating people quickly and equitably, increasing testing, and opening schools and businesses. We will be transparent with the American people about our progress. It won’t be easy and we will face setbacks. However, we continue to make real progress every day until Americans feel safe once again.”

Covid-19 by the numbers

For the science-driven administration, forecasting the future is particularly challenging because the current picture is a muddle.

Coronavirus cases are trending down, and vaccinations are ticking up. But the US is struggling to get a handle on the threat posed by new variants. Experts — both inside and outside the White House — are still far from certain that America is finally clawing its way out of the pandemic.

“This is a race to get the vaccine out there broadly enough and fast enough that it eliminates the chance of spread of even more strains,” said Dr. Bala Hota, an infectious disease specialist at Rush University Medical Center in Chicago. “We’re not out of the woods yet.”

One thing is certain: over the last two weeks, the US has seen a huge improvement across all major metrics experts have used to track the pandemic.

As of Friday, the seven-day average of daily cases is down more than 22% from the previous week, and average deaths are down more than 15%, according to Johns Hopkins University data.

Hospitalizations have declined nearly 13% and the percent positivity rate at 6.19%, according to the Covid Tracking Project.

As of Friday, only one state — Alaska — was showing an upward trend in Covid-19 cases.

While the Biden administration has made a major push to reduce the spread of disease by launching mass vaccination sites, taking strides to ramp up vaccine production and promoting safety measures, such as mask wearing, many experts said it’s still too soon to say that those actions are driving the improving trends.

“Any kind of policy that is implemented at the beginning of January, you wouldn’t probably see anything that quickly,” said Nandita Mitra, a professor of biostatistics and epidemiology at the Hospital of the University of Pennsylvania.

Health experts said the trends were likely improving for reasons unrelated to Biden’s policy initiatives. Cases are leveling off after holiday-related spikes and it’s too soon to see fallout from new potential super spreader events, such as Super Bowl parties.

“We’re now a month past the holiday and everybody has gone back to their bubble,” Hota said.

Vaccines are also making their way to more Americans. More than 48 million shots have been administered so far, according to data from the Centers for Disease Control and Prevention. The pace of vaccinations has been picking up steadily from week to week, which experts attributed partly to vaccine makers growing more adept at vaccine production and partly to states streamlining their distribution efforts.

But it’s hardly time to celebrate.

Case numbers have been so high in these last two months that if you take just the first 10 days of February, the US has had more new cases than it had for the entire month of March, or April, or May, or even June of 2020.

“Now is not the time to look at those curves, in my view, and breathe a sigh of relief. We have a ways to go,” Slavitt said on CNN this week. “We know that this thing has been unpredictable for the last year. I think it’s still going to be unpredictable.”

The unpredictability ahead has already led to some careful hedging from the White House.

Biden announced Thursday that the US will have purchased enough doses to vaccinate 300 million Americans by the end of July. White House aides quickly followed up with a clarification: vaccines aren’t vaccinations. Even though the doses will be available by July, it’s unclear when nearly all Americans will actually be vaccinated.

The administration didn’t offer details about how thorny challenges like vaccine hesitancy and variants swirling in the US could impact America’s path to normality or when the end of this pandemic may be in sight.

“The Biden administration is going to have to address this issue and we’ve got to stop basically telling people we’ve turned the corner,” said Michael Osterholm, who advised Biden’s team during the transition and is the director of the Center for Infectious Disease Research and Policy at the University of Minnesota. “At the rate we’re at right now, this is going to be a huge challenge.”

While then-President Trump was keen to take center stage in the coronavirus response, it often ended in disaster. He undercut scientists, peddled unproven miracle cures and even appeared to suggest injecting disinfectants might ward off the virus.

Biden advisers are now facing a beleaguered American public, suffering whiplash after Trump-era promises that things were just on the brink of getting better.

“I think the country has lived through a long period of over-promises, false deadlines, dates that have no basis in science, and I don’t think you’re going to hear that from this White House,” Slavitt said on CNN this week. “We don’t want to try to forecast the future.”

An administration official insisted Biden has been forthright with Americans, pointing to the President’s previous comments, including a line in his inaugural address in which he said, “We are entering what may well be the toughest and deadliest period of the virus.”

Since then, Biden and his team have continued churning out policy initiatives aimed at pulling America out of the crisis. Their signature effort remains a $1.9 trillion coronavirus relief bill that awaits approval from Congress.

Even with those interventions, experts said it’s difficult to predict the next turn the virus will take.

A year into the pandemic, the nation has a higher level of immunity than it did last year, which could help slow — but not stop — the infection rate, some health experts said.

“We certainly have not reached herd immunity, but we probably have at least somewhere around a third of the population that’s been exposed that might have some short-term immunity,” said Dr. Amanda Castel, a professor in the department of epidemiology at George Washington University.

But the variants — along with human behavior — could easily send cases climbing again.

“I worry that people have a false sense of reassurance because things are trending down and then all of the sudden you see people loosening restrictions in certain areas and people relax a little more,” Castel said

Some states and cities have begun to relax Covid restrictions, even though caseloads remain high.

North Dakota and Iowa have both rolled back their statewide masks mandates. New Jersey and New York City are loosening restrictions on indoor dining. New York state is planning to reopen arenas and stadiums this month, at limited capacities. And Ohio announced it is bringing back self-service buffets.

“I understand why there’s this unbridled enthusiasm to get back to some semblance of a new normal,” Osterholm said. But “people do not realize what a curve ball the variants have thrown us.”

City to fire officer who drunkenly drove into home