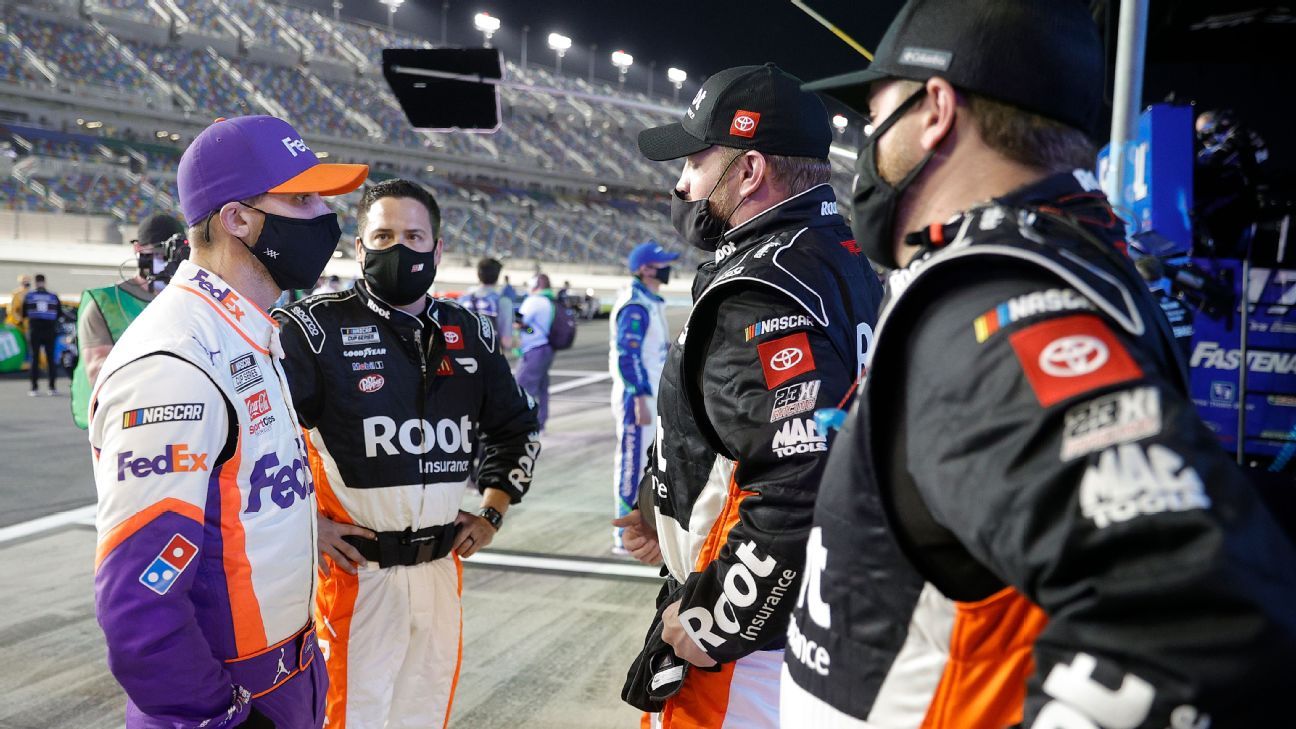 The first real race day of 2021 has finally arrived, as the green flag is scheduled to drop on the 63rd running of the Daytona 500 around 2:30 p.m. ET. Even if you never watch auto racing, this race — the 20th anniversary of Dale Earnhardt’s death at the track — should still be considered a must-see.

So, what do you need to know before Sunday’s 500-mile, 150-lap, 200-mph event? Here’s a cheat sheet you can keep on your phone to read fascinating fast facts aloud to your family and make them think you’re the second coming of Fireball Roberts. It’s broken down into sections of three, because that makes it easier to remember, and because this is Daytona and, well … EAAARNNNHARDTTT!

Denny Hamlin and history. For those of us who exist in a more seasoned age demographic, it’s hard to believe it’s been a decade and a half since Hamlin showed up for his first Daytona Speedweeks and promptly shocked the racing world by winning the Budweiser Shootout (now the Busch Clash) all-star race. But over the past five years, he has become a bona fide Daytona legend, winning three of the past five editions of the Great American Race, including the past two in a row. If he wheels his No. 11 FedEx Toyota into Victory Lane again on Sunday, he will become the first driver to win NASCAR’s biggest race three years in a row and move into a tie for second place in all-time 500 wins, while also tying Cale Yarborough with four Daytona wins.

Hamlin’s other team and history. Hamlin is also entered in this year’s race as a team owner. This year’s Daytona 500 will be the maiden voyage for the No. 23 Toyota of new 23XI Racing, co-owned by Hamlin and Michael Jordan. How’d that happen? Hamlin is to the Charlotte Hornets what Jack Nicholson is to the Los Angeles Lakers or Spike Lee to the New York Knicks, the constant courtside presence. He had been bugging Jordan for years to get involved in NASCAR, so why now? Because Bubba Wallace was available to hire as a driver. Now Wallace, who finished second in the 2018 Daytona 500 (his first career 500 start), is attempting to become the first Black driver to win a Cup race since 1963 and the first driver to win the Great American Race in a from-scratch race team. For more Hamlin, Bubba and MJ, read this story from Saturday.

Kyle Busch finally undoing history. The driver they call Rowdy has won at least once on every current Cup Series racetrack (not counting the still-new Charlotte and Daytona rovals) and with 213 wins across NASCAR’s three national series, he has a trophy from every significant event on every stock car schedule … except for the biggest one of them all. Busch is 0-for-15 in the Daytona 500 and is now approaching the February frustration level of a long list of men whom he will join one day in the NASCAR Hall of Fame, from Dale Earnhardt (won on his 20th try) and Darrell Waltrip (won on his 17th try) to Rusty Wallace, Terry Labonte, Mark Martin and Tony Stewart, who won a combined 166 races and six Cup titles, but who also combined to go 0-for-111 in the 500.

Hamlin. Do we need to remind you about that whole won-three-of-the-past-five thing? And you don’t have to take my word. Vegas has him at the top of their board at 8-1. (If you’d like to read more about Daytona 500 betting, check out this post from the ESPN Betting Insiders.)

Brad Keselowski. He has long been a great superspeedway racer with six victories between Daytona and Talladega, but he is 0-for-11 in the 500. Last year summed up his career in the Great American Race, leading the second-most laps behind Hamlin (30), but crashing out and finishing 36th. This is the only jewel missing from BK’s NASCAR Hall of Fame crown.

Ryan Blaney. Last year’s Daytona 500 runner-up was one of the early favorites to fight for the 2020 Cup championship, but he faded by summer’s end. Two of his four career wins have come at Talladega, and he looked strong in his Duel 150 qualifier Thursday night. Everyone agrees that Blaney is on the cusp of stardom, but he needs a signature win to finally start fulfilling that potential. This could be it.

Chase Elliott. The defending Cup champ has spent his career tripping over his own bumper in the 500, winning two poles and leading 69 laps, but never finishing higher than 14th, throwing in a couple of wrecks for good measure. But last fall in the regular-season cutoff race, he finished second to William Byron by .119 seconds. That effort helped boost the Son of Bill to his first Cup Series title.

Austin Dillon. People will always complain that Dillon drives the Richard Childress Racing No. 3 Chevy because it was made famous by Dale Earnhardt. But Dillon (who was OKed by Earnhardt himself as heir to the throne when Dillon was a kid) won the Daytona 500 in 2018, owns seven top 10s in 15 career Daytona oval starts, and did you see that move he made to beat Bubba Wallace at the line in Thursday night’s second Duel 150 qualifier? It would be hard to find a better storyline than that car winning this race around the 20th anniversary of Earnhardt’s death.

Kevin Harvick. Happy has been mighty quiet during these Speedweeks. After winning nine races but failing to make the Championship Four last fall, the 2007 Daytona 500 champ is more like Unhappy. And that usually means the rest of the field will end up being the unhappy ones.

Three sleepers not to sleep on

Kyle Larson. After his use of a racial slur, Larson was suspended from the Cup Series for the majority of the 2020 season. He returns behind the wheel Sunday, this time at Hendrick Motorsports. The Big One seems to attract Larson like a magnet, but in his past two Daytona 500 starts with Chip Ganassi Racing, he finished seventh and 10th.

Chris Buescher. He has quietly finished in the top five twice over the past three years. He also owns five top 10s in 10 career Daytona oval starts, which is a quarter of his career top-10 finishes.

Ryan Newman. Buescher’s Roush Fenway Racing teammate will forever be linked to the Daytona 500 via his horrifying finish line crash one year ago, which more people are likely to remember than his win in this race in 2008. But what few seem to recall about his ’20 wreck is that he was in the lead and within sight of the checkered flag when it happened.

Three things to blurt out to impress your friends

“Isn’t it great to see Pitbull involved in NASCAR?” Jordan isn’t the only superstar who has decided to write big checks and go racing in 2021. Mr. Worldwide has joined the Trackhouse Racing Team as a co-owner and will be in Daytona on Sunday, not just to cheer on driver Daniel Suarez in the No. 99 Chevy, but also as the Daytona 500 grand marshal. This is no fluke involvement, either. The music artist has loved NASCAR since he watched “Days of Thunder” as a kid, and years ago he purchased a stock car for his Miami charter school as a tool to teach science and math.

“You know, this is the last Daytona 500 for this particular generation of stock car.” OK, we totally told you to say this last year, too. But due to the pandemic-altered 2020 season, NASCAR wisely chose to postpone the introduction of its “Next Gen” model of race car until 2022. The sanctioning body has been working with Chevy, Ford and Toyota to design a new stock car they promise will be cheaper to build, more brand-identifiable and, yes, racier. Teams tested the first iteration of the Next Gen car at multiple racetracks over the winter and early reactions were good ones.

“It is truly amazing what NASCAR has done to improve safety since Dale Earnhardt’s death 20 years ago this week.” It has indeed been 20 years since The Intimidator died on the final lap of the Daytona 500, but thanks to the safety evolution that took place as a result of his death, no driver has been killed across NASCAR’s top three national series since that awful day of Feb. 18, 2001. For more, you should check out our four-part series on Earnhardt’s racing a safety legacies. Yes, we know that’s a lot of reading to finish between now and the start of the 2021 Daytona 500. But looking at the weather radar, it unfortunately seems like you’re going to have plenty of time.