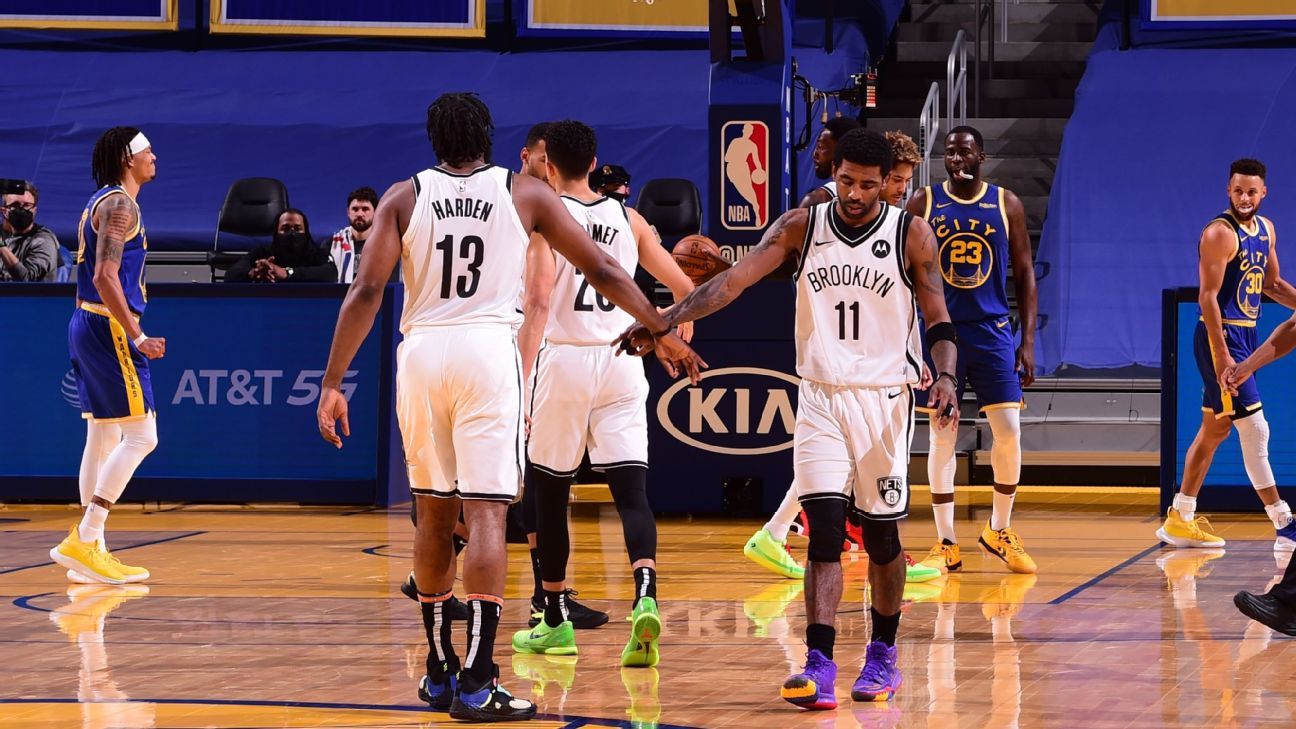 
As the Brooklyn Nets’ big three of Kevin Durant, James Harden and Kyrie Irving continue to work on building their on-court chemistry, Irving and Harden had a brief conversation at practice this week to clarify their roles.

“We established that maybe four days ago now,” Irving said after the Nets’ 134-117 win over the Golden State Warriors on Saturday. “I just looked at him, and I said, ‘You’re the point guard, and I’m going to play shooting guard.’ That was as simple as that.”

Irving described the conversation as concise and matter-of-fact.

“It’s not a mystical conversation that we had,” Irving said.

In Saturday’s game against the Warriors, Harden had 16 assists, raising his 11.3 assist per game average since joining the Nets in mid-January. It’s the most assists he has dished out since the 2016-17 season, when he led the league with 11.2 assists per game for the Houston Rockets.

“He’s been taking control of the responsibilities and doing an incredible job,” Irving said. “It just makes my job easier to just go out and play free and just make plays.”

When Harden — a multitime scoring champion — was added to the Nets’ mix, an overriding question was: Is one basketball going to be enough?

Harden had discussed with head coach Steve Nash his willingness to play whatever role necessary upon his arrival from Houston.

On Saturday against the Warriors, Harden, Irving and Durant scored or assisted on 100 points for Brooklyn. Saturday marked the seventh game the trio played together — including last week’s matchup with the Toronto Raptors, during which Durant was yanked from the floor early because of the league’s coronavirus protocols.

Their record together is 5-2, including the loss to the Raptors that Durant was unable to finish.

“I came to this team knowing that they have two special scorers on this team,” Harden said. “Obviously, I score when I need to, but as long as I’m getting everybody involved and Ky is getting the shots that he wants, KD is getting the shots that he wants, it’s pretty efficient. Offensively is not the problem for us, we can score in bunches; it’s defensively. It seems like we’re getting a rhythm as of late. We just got to keep it up.”

Follow live: No. 3 Michigan looks to keep winning ways going vs. No. 21 Wisconsin