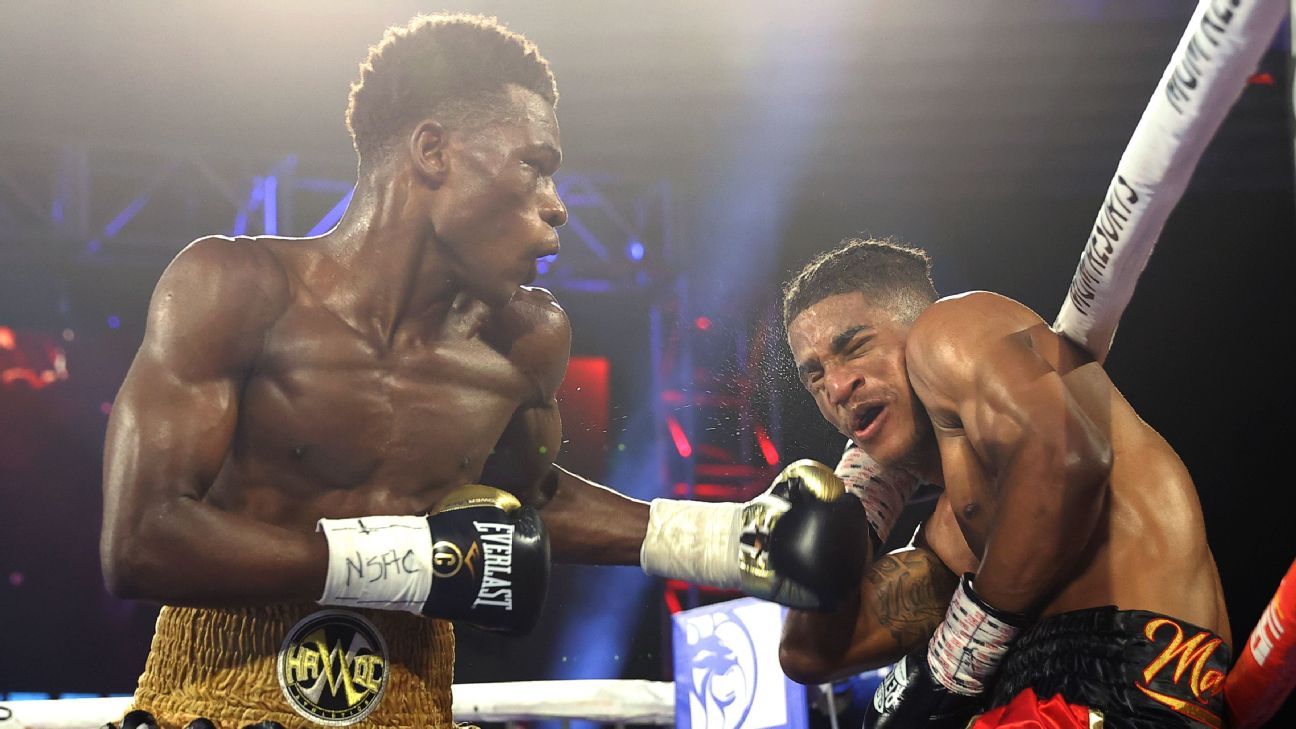 
Richard Commey returned to the winner’s circle with a tremendous KO victory over Jackson Marinez on Saturday, and looked as good as he did before his loss to Teofimo Lopez 14 months ago. With the victory, Commey gets back into title contention, but should he fight one of the other champions — specifically one not named Teofimo — next?

Joseph “JoJo” Diaz lost his belt on the scales on Friday and fought to an uninspiring majority draw against Shavkatdzhon Rakhimov on Saturday. How does JoJo revive his career? And can he win his title back?

Heavyweight prospect Jared Anderson scored another must-see KO victory on the Commey-Marinez undercard, this time against Kingsley Ibeh. While he’s not ready to become a title contender just yet, the 6-foot-4 big puncher from Toledo, Ohio, is certainly trending in the right direction.

Finally, Josh Warrington’s undefeated record is no more, after a stunning upset loss for the former IBF featherweight world titlist against 22-year-old Mauricio Lara in the U.K. How can he recover from this major bump in the road?

Cameron Wolfe, Ben Baby and Nick Parkinson share their thoughts on the biggest stories in boxing stemming from Saturday’s action.

Is Commey ready for another title shot? How does he get there?

Wolfe: Sure, he’s ready — but not against Teofimo Lopez. He shouldn’t seek out that Lopez smoke, but another titlist, Devin Haney, would be fair game. That would be a fun clash of styles and a good step up for Haney.

Commey is a flawed fighter, but he has great knockout power that makes him worth respecting anytime he gets in the ring. Commey is a legitimate top-10 contender in a lightweight division that might be the most competitive in boxing right now.

Commey’s eye-opening knockout win over Jackson Marinez was the perfect start to his efforts to climb back up the ranks, but he probably needs a couple more solid wins to regain the momentum needed for another title shot.

I’d love to see Commey vs. Masayoshi Nakatani — two powerful punchers trying to work themselves back into title contention after 2019 losses to Lopez.

A bout with Ryan Garcia would be intriguing and fun, too. Plenty of potential opportunities.

JoJo Diaz at a crossroads. Can he do the work and get his title back?

Baby: JoJo Diaz avoided a disaster by salvaging a draw against Shavkatdzhon Rakhiomv. But the moment Diaz stepped on the scale 3.6 pounds overweight and lost his IBF junior lightweight title, he encountered a reality check.

The 130- and 135-pound divisions in boxing have too much quality for Diaz not to operate at the highest level. Even though he said he was a disciplined fighter in his post-fight interview with DAZN, missing weight by more than three pounds indicates otherwise. Not to mention that this happened in his first title defense and during a global pandemic in which working out is one of the few ways one can keep busy.

Diaz’s saving grace was his accuracy and activity, combined with Rakhimov’s waning output in the final rounds. Otherwise, the whole weekend ends up being a worst-case scenario for the 28-year-old Diaz.

Whether Diaz stays at 130 or moves up to lightweight, it will take a lot of hard work in and out of the ring to contend for a championship. And those divisions aren’t just deep. They’re also filled with talented fighters who are putting on impressive performances, not squeaking by with tepid outings.

If Diaz wants to be a serious player, he’ll need to buckle down in the coming months.

How far is Jared Anderson from becoming a heavyweight contender?

Wolfe: It’s a matter of “when” not “if” Anderson becomes a top heavyweight contender, but I think he’s maybe two or three years away from that point.

With just eight pro fights, he’s been managed well in slowly ramping up his level of competition while gaining more rounds. I’d circle 2023 as the year when Anderson works his way into the top 10 of the heavyweight rankings.

It’d be ideal to see him continue getting rounds in 2021, before moving on to heavyweight veterans of the skill level of Carlos Takam, Charles Martin or even Luis Ortiz in 2022 before facing the top heavyweight contenders in 2023.

Anderson is coming in this heavyweight division. His combination of power, speed, defense, athleticism and an impressive left jab is as good as any other heavyweight prospect out there right now. But the power he’s shown with eight knockouts in eight fights is what will allow him to climb the ladder quickly.

Let’s see Brian Castano vs. Jermell Charlo for all the marbles at 154 pounds

Baby: Good luck holding on to a title in the 154-pound division. Once again, a junior middleweight lost his WBO belt — a recurring theme over the last couple of years. This time it was Brian Castano who was crowned as a new champion, following a resounding victory over Patrick Teixeira.

Castano’s win sets up a natural next fight — a bout against Jermell Charlo to create an undisputed champion. Charlo holds the other three major titles in the division after he knocked out Jeison Rosario last September, in what was one of the best performances of Charlo’s career.

Charlo and Castano each have their flaws, much like the rest of the contenders in the division. The impurities give the division a unique level of excitement that doesn’t necessarily exist in the rest of boxing. Because there isn’t a fighter or two that are clearly above the rest, belts can change pretty easily.

Undisputed champions in boxing are incredibly rare. And after Castano’s win, it makes sense to see if we can figure out who’s the best 154-pounder in the world.

Where does Warrington go from here?

Parkinson: Josh Warrington’s first fight in 16 months was meant to be a step towards something bigger. Instead, he was knocked out in the ninth round by Mauricio Lara at the SSE Arena, Wembley in London. He now finds himself further adrift from future title fights against Xu Can and Gary Russell Jr.

Warrington (30-1, 7 KOs), 30, from Leeds, England, went into the fight as ESPN’s No. 1 in the featherweight division, but he produced a pallid performance and was brutally punished by the little-known Lara. You can’t blame the matchmaking. Lara, 22, was inexperienced and had never fought an elite level fighter.

But Mexico City’s Lara (22-2, 15 KOs) was a lot sharper than Warrington and never looked out of place against the best opponent of his professional career.

Warrington’s first professional defeat damages his hopes of challenging Can, of China, and Russell Jr, of the United States — the WBA and WBC world featherweight champions, respectively — later this year.

The decision to give up the IBF belt and face Lara in a warm-up fight are not to blame for defeat. Warrington lost due to other reasons — motivation, lack of activity and perhaps conditioning.

Now Warrington must repair the damage done to his career, perhaps in a rematch with Lara, before thinking about fighting for a world title again. He will also need some time out.

This was a brutal defeat for Warrington, who was given oxygen while he sat on the ring apron after being flattened by a left hook from Lara. After getting knocked down twice in the fight, Warrington was taken to the hospital for monitoring.

Lara boxed four times in 2020, while Warrington was kept out of action due to the coronavirus pandemic.

“He came out and he was erratic, the ring rust showed and how he got through [the] fourth round I don’t know, he never recovered from that shot. The bravery was incredible.

“For Josh Warrington, it’s a crushing blow. We wanted to be talking about fights against the likes of Gary Russell. It’s back to the drawing board. He got beat by a hungry Mexican fighter, which changes his lifetime.”

Give Kamaru Usman the respect he deserves, and maybe a rematch with Jorge Masvidal as well