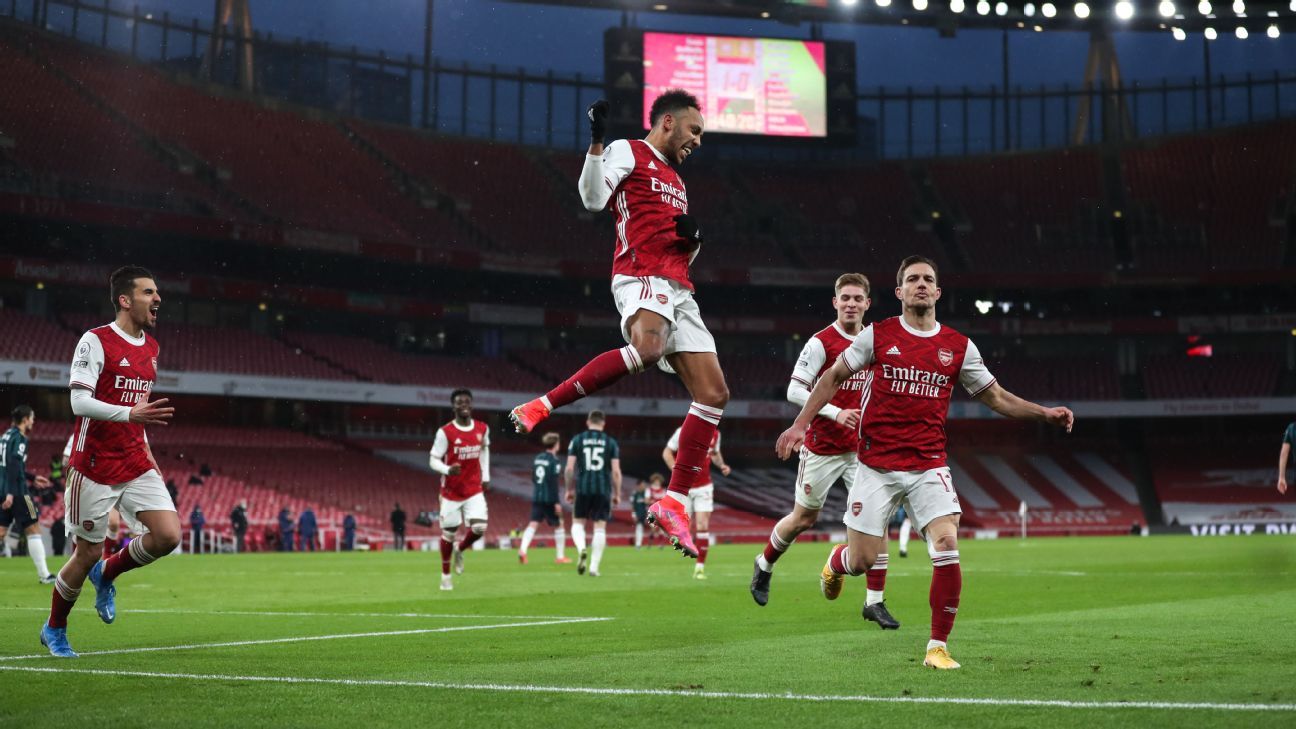 
LONDON — Perhaps Arsenal supporters can begin to expect the unexpected again. One persistent criticism of manager Mikel Arteta is the Gunners’ rigidity in attacking positions that has often led to an inability to translate possession into clear goal-scoring opportunities. Leeds United may have been willing accomplices at Emirates Stadium, but Sunday’s 4-2 win featured a more enticing vision of what Arteta is aiming to implement — just not in the way many expected.

It appeared when Martin Odegaard arrived at the club on loan from Real Madrid that he would end up in a rotation with Emile Smith Rowe, who has seized his opportunity in the first team with great aplomb, but could not reasonably be asked to carry a heavy creative burden in his breakthrough season. Yet Arteta opted to hand Odegaard his first start alongside Smith Rowe, the former as a No. 10 in a three-man advanced midfield with Bukayo Saka on the right behind central striker Pierre-Emerick Aubameyang in a 4-2-3-1 shape.

What followed was one of Arsenal’s most dynamic attacking performances of the season, with Aubameyang clearly revelling in the creativity provided by his supporting cast. “I thought [the creativity in the final third] was much better,” said Arteta. “We were much more efficient and we were composed. We took our time when it was needed. We had movement, runs in behind, people in the box and arriving into the box. Our decision-making was much better and our efficiency, we were hitting shots and many of those were on target. That was the difference.”

Odegaard and Smith Rowe interchanged positions with impressive fluidity, Saka menaced Leeds through a mixture of pace and cool-headed decision-making in the final third and Aubameyang helped himself to the first Premier League hat-trick of his career.

Only West Brom (55) have conceded more goals than Leeds’ 42 in the top flight this term, and the price they are willing to pay for showing such relentless attacking intent is an openness that top sides can exploit. The Gunners have not always appeared capable of taking such opportunities, but they did so here in what no doubt felt like something of a cathartic release after frustrating defeats to Wolves and Aston Villa.


Those games contained VAR-related controversy (a David Luiz red card at Molineux, which the club tried and failed to appeal, before being denied a man advantage of their own for a foul on Bukayo Saka, and later, a strong penalty shout at Villa Park). On Sunday, it appeared third time unlucky. Aubameyang had already put Arsenal in front with a low 13th-minute drive by the time Saka burst through on goal, only to go down under contact from Leeds captain Liam Cooper. Referee Stuart Attwell pointed to the spot, but reviewed the decision on the pitch-side monitor and judged that Cooper didn’t make contact sufficient to make Saka fall.

Arteta was furious on the touchline, but Saka continued unperturbed, pressing goalkeeper Ilian Meslier into a mistake as he dallied on the ball, winning a spot-kick beyond contention. Aubameyang converted and Arsenal established a control they never really looked like relinquishing, with Hector Bellerin smashing home a third after some excellent work around the box from Saka and Dani Ceballos. It was the first league game this season in which the Gunners scored three first-half goals.

Smith Rowe set up Aubameyang’s third with a superb ball two minutes after the restart, before Leeds struck twice through Pascal Struijk and substitute Helder Costa to take a little sheen off the Gunners’ victory. The latter stages were a little more uncomfortable than Arsenal may have liked, but parity never appeared to be restored.

Aubameyang walked off with the match ball, having vowed in his programme notes to “repay all the love” shown to him during a difficult period in which he missed games while caring for his sick mother. He did that and then some here, netting his 200th league goal in Europe’s Top 5 divisions in the process and reaching 36 Premier League goals for Arsenal. Only Jamie Vardy (46), Mohamed Salah (42) and Sadio Mane (37) have scored more since Aubameyang made his debut in February 2018.

“It’s been a tough time for me, but now it’s time to get the smile back and win games and score goals, that’s it,” said Aubameyang. “Everybody around the club was giving a lot of love to me, my mum and my family, so I’m really, really happy and I’m really proud to be part of this family. I’m really happy today, the win and goals — this is for them.”

Said Arteta of his center-forward, “He had a great performance not only for the goals, but the way he worked without the ball.”

Aubameyang added potency to the purpose injected by Saka in particular, who continues to excel; it was Gabriel Martinelli who set the tone for this team upon his return to the side, but these days Saka is performing that role with remarkable consistency. His form is so good that Willian and club-record signing Nicolas Pepe are among those who will have to respond to earn a place in the team.

The challenge for Arsenal now, as it has been during prior purple patches, is to play with such ingenuity against better opponents. Arsenal’s next four games are both legs of their Europa League last-32 tie against Benfica, as well as challenging clashes against Premier League leaders Manchester City and high-fliers Leicester City. Those opponents will not be as accommodating as Leeds, but Arsenal now have a prime example of their expressionism on which to build.

Vandersloot to New York, the rise of superteams and a Liberty-Aces WNBA Finals?

Vandersloot to New York, the rise of superteams and a…