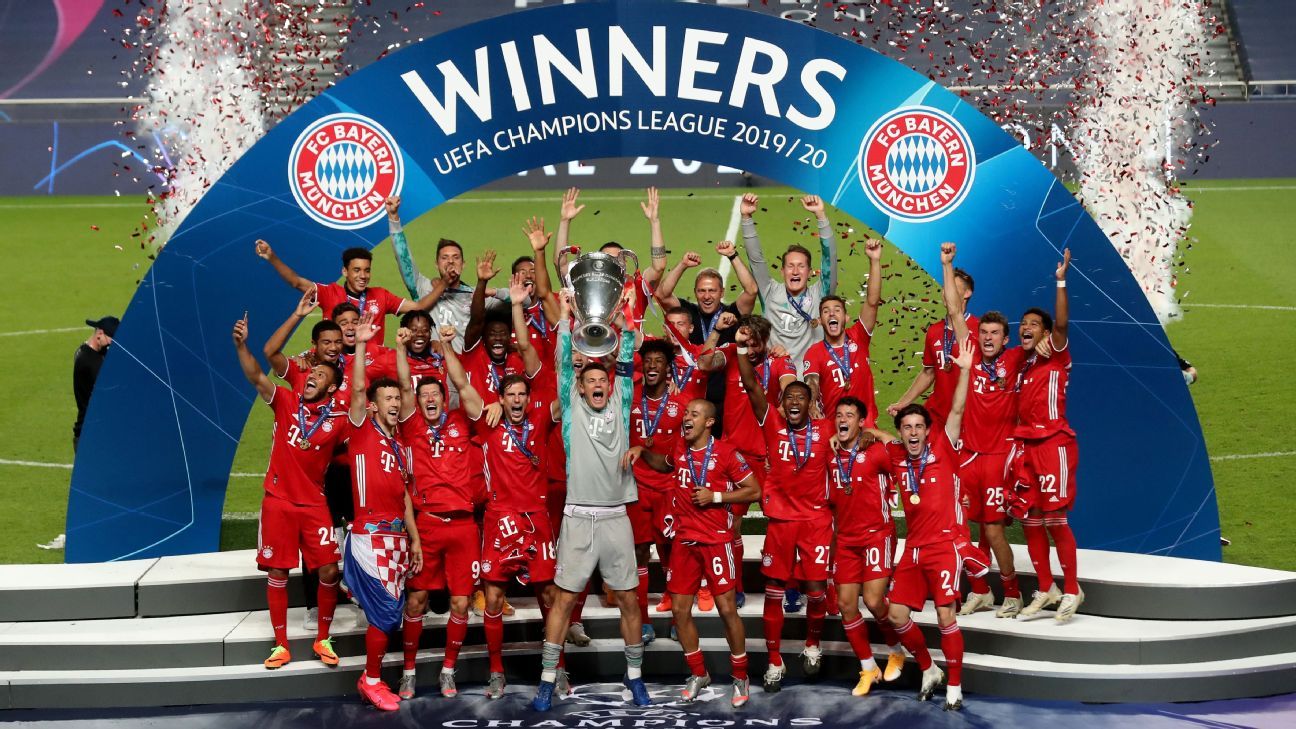 
Jurgen Klinsmann won the World Cup and European Championship with Germany during a glittering career in which he played for Inter, Tottenham and Bayern, among others. As a coach, he led Germany to a third-place finish at the 2006 World Cup and managed the U.S. men’s national team from 2011-16. In addition to an ESPN.com column, he is a regular guest on FC Daily.

The Champions League is the best competition in soccer and its knockout rounds offer the game’s highest quality.

Don’t get me wrong: I love the World Cup, European Championship and Copa America, but if you played the best national teams against the best club teams then the countries would lose. As a coach, meanwhile, you constantly look at what is being done in the Champions League. From the tactical approach to the tempo of games, it sets trends.

You could watch Barcelona under Johan Cruyff in the 1990s to see how they stretched the field to open up teams and used outside backs almost like wingers. Or look at how the No. 6 has developed into a very important role, with players like Didier Deschamps or Andrea Pirlo almost more of a passing “quarterback” than a No. 10, or Javier Mascherano moving back into defence. Then you had teams playing without a striker, using six attacking midfielders instead, like Barcelona with Lionel Messi as a false nine.

It is true that the group stage can get a little boring if the favourites are too strong, but at the end of the competition, you really want the best teams to face each other, and the existing format gives a better chance for that to happen. It also forgives you a bad game, unlike when I played!

Back in the days of the old European Cup, I was at Inter and we drew Malmo from Sweden, who were managed by Roy Hodgson, in the first round. They won the first leg 1-0, then parked the bus to draw in Italy. These days, that would mean one point from two games and a situation that would be rescuable with four more games. Back then, we were out.

But while more games are better, I hope that we never get to a stage where there is a European Super League, meaning some clubs don’t play in their domestic competitions. You always want to have the opportunity for other teams to play their way into the Champions League and compete with the best. Talking of which, let’s look at the contenders to win this season’s competition.

One of my other old clubs, Bayern Munich, are the holders and the team to beat as the knockout rounds begin. It is arguably the biggest club in the world and set up to compete every year; you know that, as a player or a coach, the job is to win titles and there is an approach that is repeated daily, whether at training, a German Cup game or the Champions League final.

Bayern set the tone for what other clubs want to achieve, but it is always hard to repeat as Champions League winners because a little drop in energy going into the next year is natural and you ask: “How can we do that again?” Real Madrid are the only team to retain the trophy in the modern era, so that shows you how big a challenge Hansi Flick’s men face.

It helps that they have Robert Lewandowski, who is the best No. 9 in the world and a wonderful example of how good you can be over a long period if you fit perfectly into a style of play, if you stay as hungry as the day before and if you enjoy yourself.

Left foot, right foot, headers penalties, even free kicks, Lewandowski has everything in his repertoire that a complete striker needs, and you can show what he does to any young player learning the game. I mentioned Marco van Basten in my last column and he is the player that comes to mind when I have watched Robert through the years.

Another important player is Thomas Muller, who I first met more than 10 years ago when I was Bayern manager. What stood out immediately was his intelligence and decision-making; whatever he is doing, he is doing it in the simplest way possible. He is a master at connecting the dots and has this Bayern Munich “chippiness” that means he is never content. Even if he scores three goals today, he is already focused on the next game!

I expect Bayern to beat Lazio and Juventus to go through against Porto. Paris Saint-Germain and Barcelona is a 50-50, Liverpool have the edge over RB Leipzig and Manchester City are clear favourites against Borussia Monchengladbach. Sevilla against Borussia Dortmund will be an open affair since the German club is struggling and Atletico Madrid vs. Chelsea will be fascinating to watch with high-energy coaches Diego Simeone and Thomas Tuchel on the sideline.

Maybe the surprising team in this Round of 16 could be Atalanta against Real Madrid because the football they play is fun to watch — high energy, high pressing — and their understanding for each other is perfect. Keeping that up over an entire season is a struggle so they lose some games in Italy that you do not expect, but they made quarterfinals last season so have some experience at the top level.

The key to making a deep Champions League run is finding form and rhythm at the right time. Bayern, for example, closed last season with 21 consecutive wins in all competitions and what you see around this time is the top teams trying to find the accelerating mode and come out of the winter cold, which makes them super dangerous.

You look at Barcelona and Real Madrid, who had a rough start to the season. Paris were similar and changed manager, while Man City found their form a bit sooner but even they have not always had their best. Bayern themselves took some time to distance themselves from the rest of the Bundesliga.

Bayern took some time to distance themselves from the rest of the pack in Germany, but return from winning the Club World Cup with another Bundesliga title in their sights, as well as repeat success in the Champions League, which will be a must-watch when it resumes this week.

16-Year-Old Shot In The Head, Killed In Broad Daylight In Baltimore – CBS Baltimore