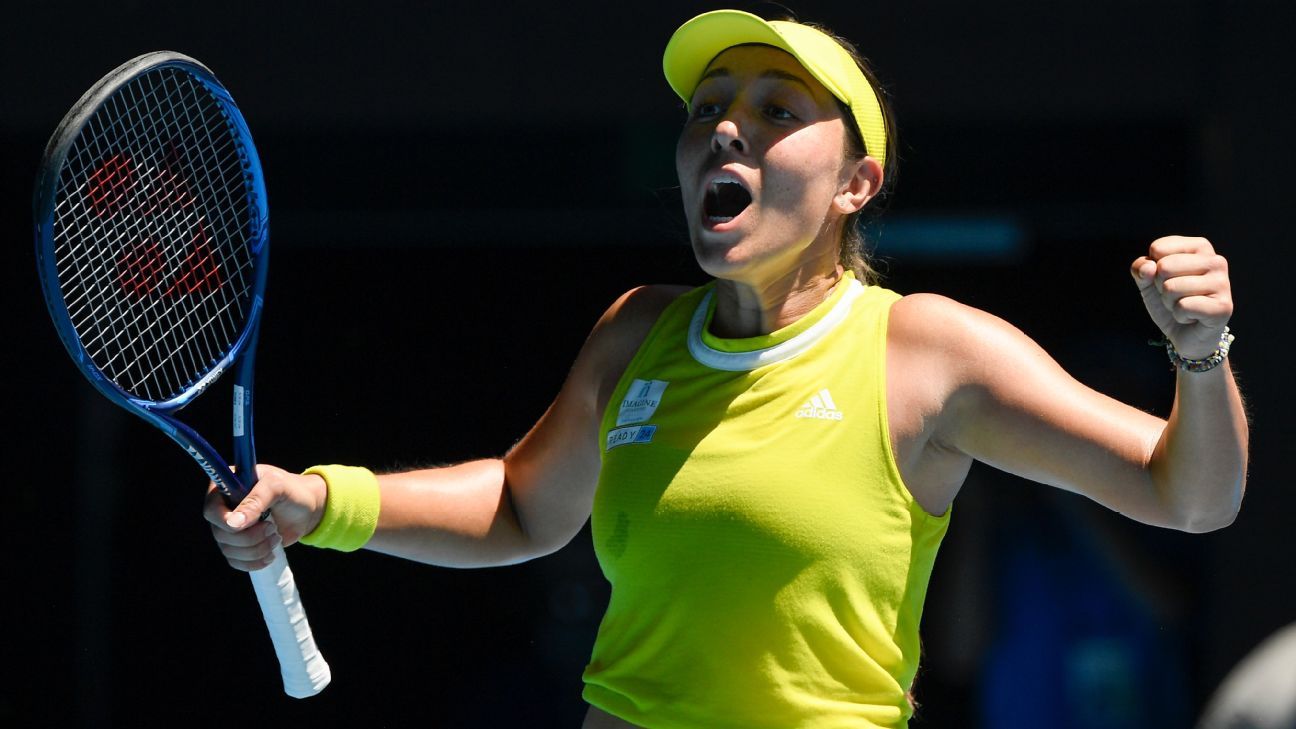 
Jessica Pegula surprised even her coaches with her quarterfinal run.

It was the 2005 Eddie Herr International Junior Championship and the 12-and-under field included Sloane Stephens, Madison Keys, Ajla Tomljanovic and Eugenie Bouchard. Pegula hadn’t played in many tournaments, so no one knew how she would handle the pressure competing against some of the best players in the world.

Those who worked with Pegula at the Smith Stearns Tennis Academy in Hilton Head, South Carolina, knew she had talent and immense potential. But all of the competitors in the 128-player draw had that. This was her first real chance to prove she had that something extra.

In her first two matches, she dropped just three games.

“That was probably the first eye-opening moment for us where we all said to each other, ‘Wow, who knows where her career can go?'” said B.J. Stearns, who coached Pegula alongside his father and academy co-founder Billy Stearns. “That was one of the bigger tournaments in the world at that time for that age group and we knew if you could do well in that type of event on the international level, you would have a real chance to make it. So we realized right then Jessie was on a great track.”

Stearns knows better than to doubt Pegula these days. Like others around her, he is thrilled, though hardly surprised, by her latest quarterfinal appearance at the Australian Open.

WITH A STAGGERING display of power and relentless ball striking, Pegula dismantled No. 5 seed Elina Svitolina 6-4, 3-6, 6-3 in the fourth round of the Australian Open on Monday to advance to her first major quarterfinals. It’s been an impressive stretch in Melbourne for the 26-year-old, who has recorded victories over two-time Australian Open champion Victoria Azarenka, former US Open winner Sam Stosur and five-time major doubles victor Kristina Mladenovic.

Pegula entered the tournament ranked No. 61 and had never advanced past the third round at a Slam. She had played at the Australian Open just once previously and was the lowest-ranked player remaining in the round of 16. She wasn’t on the radar of many casual tennis fans.

She was known more for her family than anything else. Pegula’s parents, Terry and Kim, are the owners of the NFL’s Buffalo Bills and NHL’s Buffalo Sabres, and dozens of headlines after her win over Svitolina referenced her as the “daughter of the Bills owners.” Pegula even made a joke of it on Twitter later in the night.

Pegula, who has a skincare line and owns a restaurant in Buffalo, has talked openly about the balance between embracing her family’s name and legacy and forging her own path.

“When I was younger, it was more like I wanted to make a name for myself,” she said after her third-round match. “Then, I realized as I got older, I should kind of embrace the whole family aspect of it instead. I think I actually shifted my mindset where [before] it was more like, ‘OK, I want to differentiate myself, I want to be different, I want to break away.’ I think it was almost hurting me in a way because it wasn’t going to go away. I think I learned to embrace that, kind of have fun with it.

“I actually think it’s helped kind of shifting that mindset. But obviously I still do like to keep things separate at times. Tennis is like my thing, it’s my job, it’s my career. It’s very separate. My parents don’t really have any say right now in anything I do on the court.”

Her parents are watching proudly from Buffalo — over 10,000 miles and a 16-hour time difference away — and were instrumental in her first developing her talent. Pegula showed promise with the sport almost immediately after she first picked up a racket, and the family moved from Pittsburgh to Hilton Head when she was 7 so she could train year-round. At that time, they weren’t the owners of either of the professional sports franchises, but tycoons in the oil and gas industry.

Still, despite the family’s wealth (Terry is now worth an estimated $5.1 billion, according to Forbes), Stearns said Pegula was always down to earth and had an insatiable desire to get better.

“She put in a lot of hours,” said Stearns, who remains in touch with the Pegula family. “Her and my dad would put in about three hours a day on the court when she was 11, 12. She was committed to putting in the time and doing all of the off-court stuff. [Her family] obviously had the resources to do that, but Jessie was the one who just kept pushing herself and kept striving. I’m not surprised she’s still doing that, and it’s been very rewarding to see for all of us to watch her grow up and not give up when she could have.”

Unlike many of her peers on tour, or even some of those who participated in the 2005 Eddie Herr event, Pegula didn’t find immediate success after turning professional as a teenager. While Bouchard made a major final by 2014, Pegula only made it to her first Slam, the 2015 US Open, after qualifying.

Instead, she spent most of her time playing in ITF events and slowly improving her ranking when she wasn’t battling knee and hip injuries that often kept her sidelined. She missed nearly a year of competition following hip surgery in 2017 and said she considered walking away from the sport.

“I didn’t even know if I wanted to come back,” she said recently. “This was just going to be so hard. I think I just got over it. I was like, whatever, I’m just going to fight through it again.”

But her hard work paid off — she advanced to her first WTA final in Quebec City in September 2018 and entered the top 100 for the first time in February 2019. Pegula began working with David Witt, the longtime coach of Venus Williams, and won her first professional singles title at any level at the Washington Open in August 2019 with a 6-2, 6-2 victory over Camila Giorgi. She jumped to No. 55 in the world.

“My parents don’t really have any say right now in anything I do on the court.”

Pegula advanced to the year-opening 2020 Auckland Open final, where she lost to Serena Williams, but wasn’t able to carry the momentum into her debut Australian Open, losing in the first round. When the season was suspended last March due to the pandemic, she committed to improving her game and getting in the best possible shape. After it resumed, she advanced to a then-best third round at the US Open and made a quarterfinals run in doubles with Asia Muhammad at the French Open.

“The tennis she’s playing right now and the confidence she has speaks a lot to the work she did over the break and the preseason,” said Martin Blackman, the USTA’s general manager of player development. “Over the last two years, she’s had really consistent results and been relatively injury-free, which for her is huge, and she’s been able to get some experience at this level. She’s always been one of the best ball strikers on the tour, but now she’s been able to improve her movement and her defense, and that just gives a player like her more margin.

“Every match she’s played, she’s gotten more and more confident, and knowing what she’s been through with injuries, you can see she’s enjoying herself and savoring the moment.”

Pegula will next face fellow American and close friend Jen Brady on Wednesday. She knew about the potential matchup before she took the court Monday. After she won, she playfully wrote on the on-court camera lens: “See u nxt rd Jen B.” Brady hadn’t played her match against Donna Vekic yet, but Pegula’s wish came true soon enough. After Brady’s victory, she followed Pegula’s lead and wrote: “Bring it Jess” with a smiley face.

Another strong Slam run for Brady, who defeats Donna Vekic 61 75. Has not lost a set. #AusOpen pic.twitter.com/ndtzRCbCnf

The two, who became close when playing doubles together for the U.S. team at the Billie Jean King Cup (formerly known as the Fed Cup), have played each other just once on tour — in the first round at the 2020 New York Open. Pegula won 7-6, 6-4.

Few know what Pegula is experiencing, as well as Brady, who made her first quarterfinal (and semifinal) at the US Open in September after a similar unorthodox journey to the sport’s biggest stage.

“I know the emotions that she’s feeling,” Brady said. “You feel like you’re on cloud nine, definitely … I think everyone back home in America will be watching, definitely, and there’s guaranteed [an] American in the semifinal.”

No matter the result in Tuesday’s quarterfinal match, Pegula will go home with a new career-high ranking. She is expected to rise to at least No. 43 following her fourth-round victory. Not to mention, she will receive more than $409,000 for a quarterfinal appearance — almost half of her total career earnings.

And for those who have been cheering for her since her very first tournaments, it’s the culmination and validation of a near-lifetime of hard work.

“At 12, you could see Jessie had the potential to do what she’s doing, but there have been so many people with that type of talent that never break out,” Stearns said. “She always had the drive, and she stayed with it, despite all of the injuries, and persevered and stuck with her dream. Now everything is coming together. And who knows now? I think with COVID, the game’s kind of wide open, and she has as good a chance as anyone in Australia.”