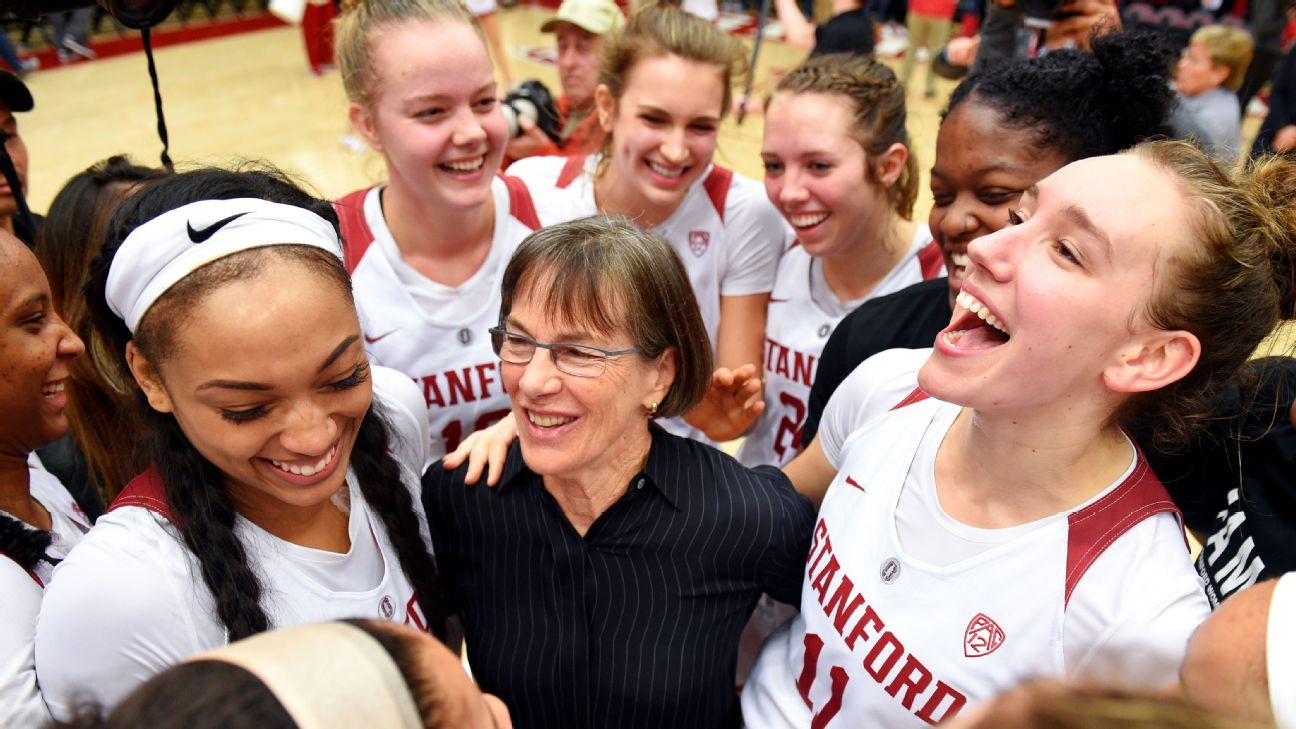 Stanford joined UConn, South Carolina and Louisville as No. 1 seeds in the first early reveal Monday of the projected top 16 seeds for the women’s NCAA tournament.

The Cardinal entered Monday’s game against Oregon with two losses this season. UConn and Louisville each have one loss, and South Carolina has lost twice. The Huskies, Gamecocks, Cardinal and Cardinals are the four teams that have held the No. 1 ranking in the Associated Press poll this season.

NC State, the only team this season with two wins over the nation’s No. 1 team (South Carolina and Louisville), was a No. 2 seed and the sixth overall team in Monday’s reveal. The Wolfpack also have losses to two unranked teams: Virginia Tech (in overtime) and North Carolina. One of Stanford’s losses was also to an unranked team, Colorado, and the other was to UCLA.

UConn’s loss was to Arkansas, and South Carolina fell to NC State and UConn. The Huskies have been a No. 1 seed in the NCAA tournament 11 of the past 12 seasons and have reached the Final Four all 12 years. They were a No. 2 seed in 2019.

The SEC has the most teams in the top 16 with five: No. 2 South Carolina, No. 5 Texas A&M, No. 12 Georgia, No. 13 Tennessee and No. 16 Kentucky. Texas A&M has just one loss, in overtime to LSU. Kentucky has the most losses of any team in the top 16, with five going into its game at Florida on Monday.

There are four Pac-12 teams: No. 3 Stanford, No. 8 Arizona, No. 9 UCLA and No. 11 Oregon. Stanford was on the road for nine consecutive weeks earlier this season because of COVID-19 regulations in Santa Clara County; the Cardinal’s two losses came during that period.

The NCAA confirmed earlier this month that the NCAA tournament will be held entirely in the San Antonio area, with some first-round games in nearby San Marcos and Austin. All games from the Sweet 16 on will be at the Alamodome, with the Final Four there on April 2 and 4.

Because it’s a single-site event, there will be a true S-curve for the bracket, instead of geography influencing where teams are placed. Therefore, the regions are numbered instead of named for the city they’re in.

This would set up a potential Sweet 16 matchup between the Huskies and Lady Vols, who have not met in the NCAA tournament since the 2004 national championship game won by UConn. The Huskies beat the Lady Vols 67-61 in Knoxville, Tennessee, on Jan. 21. UConn was supposed to play Baylor earlier in January, but the game was canceled when the Lady Bears went on a pause due to COVID-19. This regional would have by far the most combined NCAA championships: 11 for UConn, eight for Tennessee and three for Baylor.

The Gamecocks finished last season and started this one as the top-ranked team, and ascended to No. 1 again briefly last week before losing at UConn. South Carolina, the 2017 champion, currently has a 31-game winning streak against SEC foes. Maryland is the only Big Ten team since Michigan State in 2005 to reach the Women’s Final Four (2015). The Terps also had Final Four trips in 1982, 2006 (won championship) and 2014. UCLA and West Virginia are looking for their first Final Four trip in the NCAA era; the Bruins won the AIAW national championship in 1978.

Texas A&M won the national championship in 2011. Louisville is looking for its fourth Final Four appearance and Oregon its second. Kentucky has not been beyond the Elite Eight. The Louisville-Kentucky modern-era series in the regular season dates to 1975, but the programs haven’t met this season.

NWS: Travel may be nearly impossible