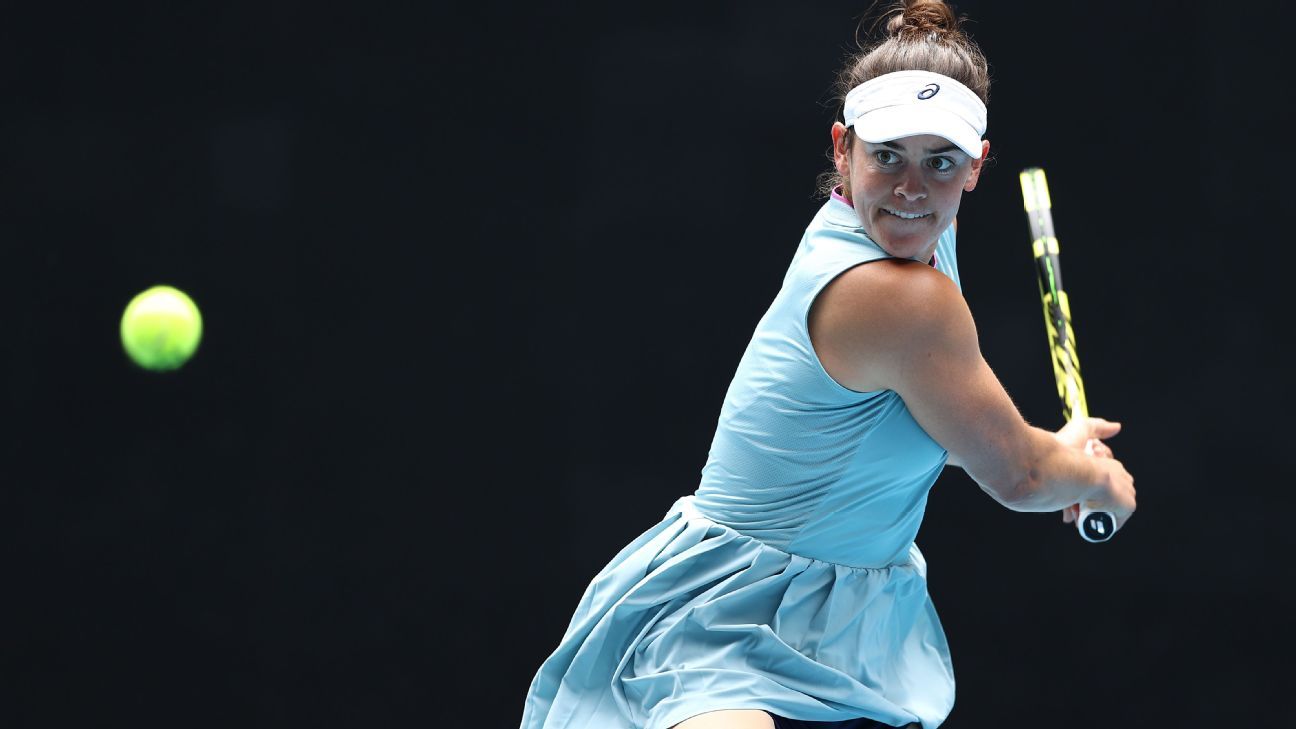 
While it may not be the semifinal anyone expected heading into the Australian Open, Thursday’s match between No. 22 seed Jennifer Brady and No. 25 seed Karolina Muchova will be a battle as both players look to earn a spot in a major final for the first time.

Brady defeated friend and fellow American Jessica Pegula, 4-6, 6-2, 6-1, in her quarterfinal match, the first match of the tournament in which she had lost a set. Muchova, meanwhile, has ousted No. 6 seed Karolina Pliskova, No. 18 Elise Mertens and No. 1 Ashleigh Barty in stunning fashion en route to the final four.

Muchova edged Brady in their only previous meeting on tour, a 6-4, 3-6, 7-6, second-round victory in Prague in 2019. Now, they will meet again in what will be the biggest match of their young careers.

Will Muchova emerge victorious again when the stakes are at their highest? Will Brady, playing in her second Slam semifinal, be able to get over the hump? Here are key points and storylines heading into their semifinal match (Wednesday, after the Serena Williams-Naomi Osaka semifinal, beginning at 10 p.m. ET on ESPN2/ESPN App).

Brady, 25, and Muchova, 24, each have one tour title in their careers. Brady took home the trophy at the TopSeed Open event last August, and Muchova ended up winning the 2019 Prague Open.

Still, neither player has much on their résumé when it comes to making deep runs in Slams. Brady made her first semifinal at the US Open in September, when she lost to eventual champion Osaka 7-6, 3-6, 6-3 in a nail-biter that was easily one of the tournament’s best. Osaka said it was one of the toughest matches of her life and what she thinks of when facing tough moments on court.

Knowing what to expect at this stage should only help Brady.

“It definitely helps, just helps overall confidence,” she said Wednesday. “Really just knowing that I belong at this level, I can compete in the second week of Grand Slams consistently, and hope to continue to do that consistently.

“Both of us played a really good match in that [US Open] semifinal — we won match of the year on the women’s side. I think that definitely solidifies the fact that we both played an impressive, high-quality tennis match from start to finish. I’m looking to hopefully replicate that in the next round tomorrow for my semifinal match.”

Prior to Melbourne, Muchova’s best Slam result was a quarterfinal run at Wimbledon in 2019. But with two wins against top 10 opponents in Melbourne (she had just one such victory entering the tournament), she might be buoyed by that confidence.

“I’m just trying to get more into games, to feel the ball, to not make such easy mistakes from the start,” Muchova said Wednesday. “I’m happy that [as the matches go on], I’m bringing my level more and more up.”

A limited number of fans will be able to return to the event starting Thursday, after the Victorian government announced it will lift its recently implemented COVID-19 restrictions.

Having played more on outer courts at Slams and in several fan-less events during the 2020 season, Brady and Muchova are not used to playing in front of bigger crowds.

Will the reintroduction of the crowd be a difficult distraction in what is already such a monumental match? Even 23-time Slam champion Serena Williams has recently said playing in front of a crowd can add to nerves and anxiety to those big moments, so it’s hard to think it would have no effect on Brady or Muchova.

It will also be interesting to watch how the crowd reacts to Muchova, who ousted hometown favorite Barty in the quarters and used a questionable medical timeout that dramatically altered the course of the match.

Brady and Muchova are both strong all-court players with incredible athleticism, powerful hitting and big serves.

Coming into the quarterfinals, Brady dropped serve just twice in the tournament, winning 32 of 34 service games. She didn’t have quite the same level of dominance against Pegula, but after having her serve broken in the first game of the deciding set, she won the final six games of the match. She had seven aces on the day (compared to zero for Pegula) and an 82% first-serve win percentage.

But if there’s anyone who can match Brady’s serving prowess, it might be Muchova. Heading into the semifinals, she has the second-most break points won among women in the tournament (26) and is third in first-serve return points won (86).

Brady described Muchova’s ability to get to the net as “crafty,” as Muchova won 13 of 23 points after moving forward against Barty. Brady won seven of nine net points against Pegula.

“[Brady] is a very good player, very big strokes, fast ones, so definitely going to be tough battle,” Muchova said. “I will have to bring my A-game to play with her because she is really playing amazing matches.”

Brady is the lone remaining player in the women’s or men’s singles draws to have endured the 14-day hard quarantine protocol after a passenger on her charter flight to Melbourne tested positive for the coronavirus upon arrival. She was forced to prepare for the year’s first Slam exclusively in her hotel room. Many other players have expressed how challenging the situation was, but Brady has stayed the course and trusted the work she put in during the preseason — even after saying Thursday that she initially “didn’t really have high expectations” after the unexpected break.

Muchova entered the tournament after the normal two-week quarantine — each day, she and other players were granted five hours outside of their rooms to train on the grounds. She has proven to be the comeback queen, winning sets after being down 5-0 (against Pliskova) and 4-0 (against Mertens). She was powerless against Barty in the first set of Wednesday’s quarterfinals, losing 6-1. But she completely dominated after her medical timeout in the second set, winning eight of nine games during one particularly blistering stretch.