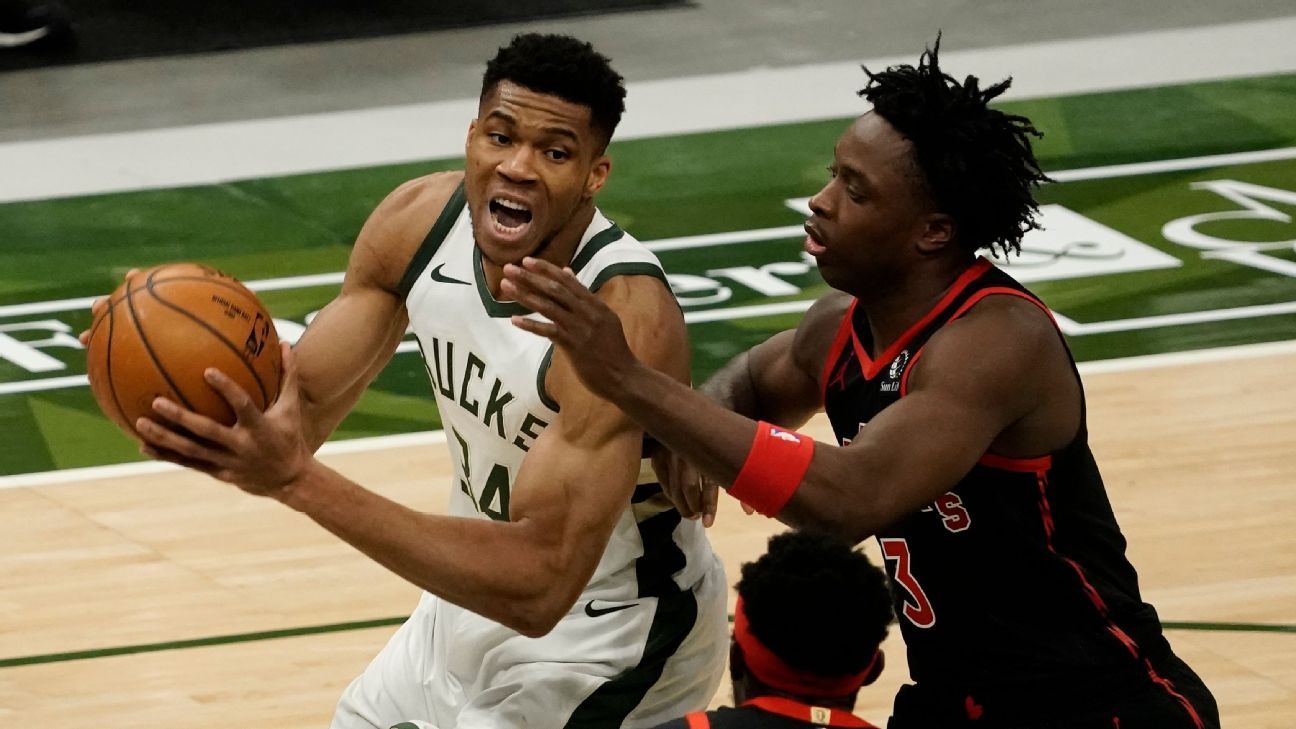 The mood inside the Milwaukee Bucks’ locker room was “kind of quiet,” according to newcomer Bobby Portis, following a 124-113 loss to the visiting Toronto Raptors on Tuesday night.

But although reigning back-to-back MVP Giannis Antetokounmpo acknowledged some frustration after the Bucks’ fourth straight loss, he said there’s no reason for the team not to stay focused and calm.

“I kind of have a feeling that everybody is in a panic mode, which should not be the case,” said Antetokounmpo, who had 34 points, 10 rebounds, 8 assists and 5 steals in defeat. “We should keep improving, we should keep playing good basketball, we should watch the film, and at the end of the day, we’ve got to go out there and compete. When you come here, nothing can be easy.”

Once again, the Bucks’ Achilles’ heel proved to be the fourth quarter, when they were outscored 12-4 in the final five minutes.

They are now 0-9 when trailing after three quarters this season, and they entered the night with the second-lowest win rate in games that went to clutch time this season at 22%, according to ESPN Stats & Information research. Only the Detroit Pistons (20%) are worse.

Clutch time is defined as any time in which the score is within five points in the final five minutes and can be at any point during that span.

“At the end of the day, we lost four in a row; we’re not going home,” Antetokounmpo said. “We’re still here. It’s not the playoffs. Obviously, it’s frustrating. We want to win, especially a game like this. A big game, guys playing hard.

“You want to come out and win the game, but it doesn’t always go your way. But always, you’ve got to look at the bright side of it. You still have another opportunity on Thursday. So, keep getting better, watch the film, improve, keep everybody in a good place, and it’s not the end of the world right now.

Milwaukee was playing without Jrue Holiday for the fifth consecutive game, as he remains out under health and safety protocols. Antetokounmpo said the Bucks are missing Holiday’s presence on the court.

“We have to be better. Obviously, one of our best players on the team and playmakers and best defenders on the team is not playing with us,” he said. “Obviously, it’s not an excuse. I’m not a guy that gives excuses. But it’s a big part of who we are, and we need him.”

Raptors guard Fred VanVleet torched the Bucks with 33 points, 7 assists and 4 boards in his fifth 30-point game this season. Toronto’s Kyle Lowry ended with 18 points, 6 rebounds and 6 assists in 22 minutes despite exiting during the third quarter with a sore left ankle.

Milwaukee (16-12) has not lost four straight since the 2019 Eastern Conference finals against the Raptors, who were the eventual NBA champions that season.

These teams will meet again on Thursday at Fiserv Forum, where the Bucks will look to make changes.

“Nobody’s happy with the result, nobody feels good about it, but your process and how you approach, you’ve got to go back and look at things and see where you can get better,” said Bucks coach Mike Budenholzer.

Earlier in the day, the Bucks also announced during a news conference that they would take a phased-in approach to hosting fans at their next three games, which would be open to player families and invited guests only. They started with 250 fans Tuesday and will increase it to 500 for Thursday’s game and 750 on Friday, before opening games up to the general public starting Sunday, when about 1,800 fans will be allowed.

Even with the fans back, they couldn’t avoid the latest loss.

Raptors coach Nick Nurse, who has battled against Milwaukee on numerous occasions, including the postseason, said he doesn’t see the Bucks’ struggles continuing.

“In a normal year, I probably would be a bit surprised. But I think there’s all kinds of things going on with several, several teams around the league, and there’s so many teams a couple games up above .500 and a couple below, like probably over half the league,” Nurse said. “I don’t really look at it that closely. So, I think that they’ve certainly got all the pieces and they’ve got depth and they’ve got experience and they’ve got everything; and I think they’re among a group of teams that will continue to play better in the second half and get ready for a long run in the playoffs. They’ve got all the tools they need.”