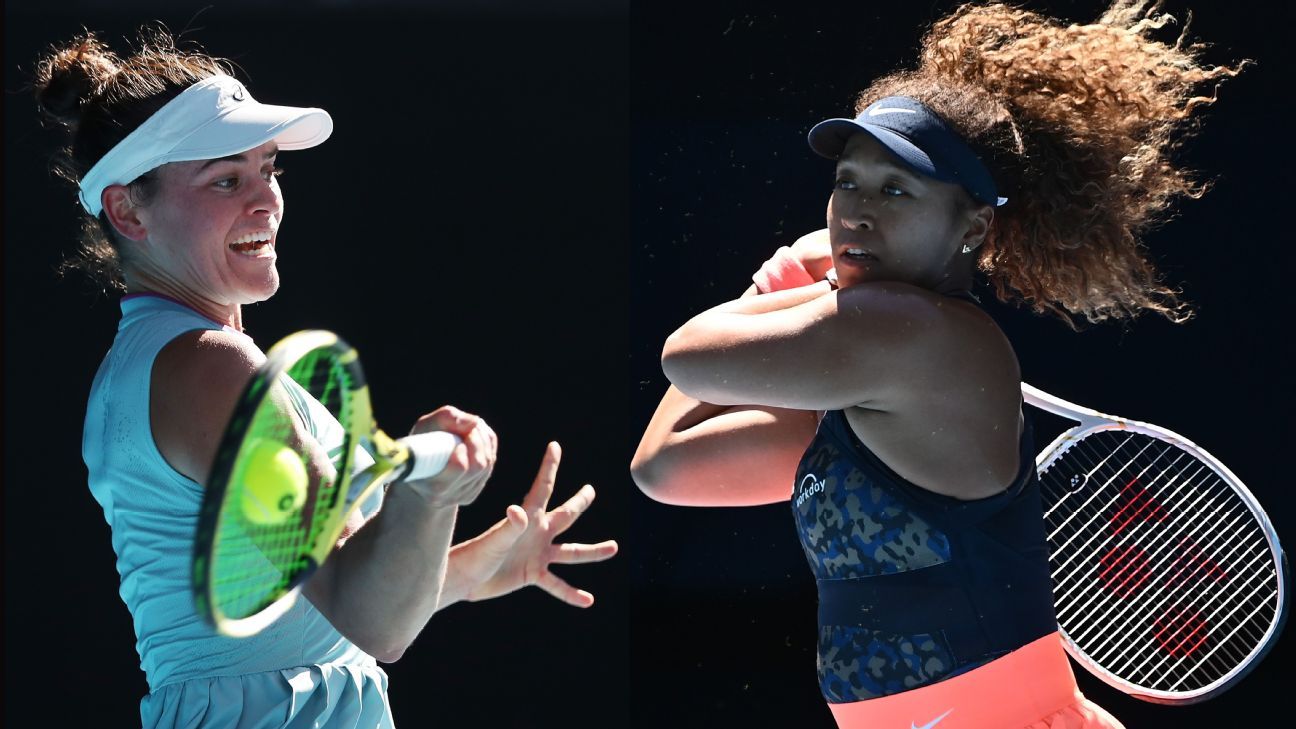 After two weeks of incredible tennis, countless upsets and ever-changing coronavirus protocols, we have reached the women’s final at the 2021 Australian Open, as No. 3 seed Naomi Osaka faces No. 22 seed Jennifer Brady on Saturday (3:30 a.m. ET, ESPN and ESPN App).

Osaka, who is 23 and defeated Serena Williams in the semifinals, is seeking her fourth Grand Slam event title and second in Melbourne. She is 3-0 in major finals and riding a 20-match winning streak.

Brady, 25, is playing in her first major final. Having taken a slightly unorthodox route to the professional ranks and playing for two seasons at UCLA, she looks to become the first former college player to win a Slam since John McEnroe at the US Open in 1984.

What are the keys to victory and storylines to watch? ESPN analysts Chris Evert, Pam Shriver and Rennae Stubbs — who have a combined 49 major titles in singles, doubles and mixed doubles — preview the match.

Stubbs: There’s so much pomp and ceremony at the Australian Open, it’s just like the US Open with the music and the lights. When you walk onto the court for the first time for a final, it’s an out-of-body experience. Anyone who plays a Grand Slam final is always nervous, so Osaka still will be, but she is used to the moment and can manage it. She has such an emotional edge because she’s been through it so many times.

For Brady, it’s going to be such a new, overwhelming experience, and it’s going to be all about how she handles that moment. People at home don’t really understand what it’s like to be in that situation for the very first time. Brady is going to have to overcome a lot of emotional and mental hurdles. Her tennis is there and she knows she can hang with Osaka after their US Open meeting, but it’s going to come down to how she deals with the enormity of the occasion.

Evert: I don’t think anyone ever knows how you’re going to react in your first final. Let’s just put it out there: Some players have wilted; some have played brilliantly. It’s a big question mark for anyone in their first final. And, trust me, the final is much different than a semifinal. I always believed, even in a quarter or semi, there are other matches going on around you. You weren’t the main attraction. In the final, it’s you, and you’re either a winner or a loser.

The way Osaka talks about it, “People only remember the winner so you have to win,” and given the success she has had at this level in Slams, her mentality is clear. As a junior, Brady would get nervous and get down on herself, but I’ve seen a new Jen over the past few years. She is a fighter; but since she has never played on this stage before, we really don’t know how she’ll do.

Shriver: I was scared to death when I played Chrissie in the 1978 US Open final, and one of the regrets I have about that final is not going in honestly believing I could win. I was 16 and was trying to put on a good show and was terrified of getting blown out. Brady is old enough and has played Osaka before; she is a strong athlete with big mental skills, so she’ll feel more prepared than I did. Osaka has the obvious advantage here — given her history in the previous three majors she has won, and the fact that she has never lost when she gets to the quarters or beyond.

The importance of the serve

Stubbs: It was clear from the beginning of their US Open match that holding serve was imperative, and both did just that as the first set went to a tiebreak. It’s important for Brady to serve a very high percentage of first serves but also to mix up her kicker, which is such a weapon, as well. Osaka was a little vulnerable at times against Serena Williams, posting three double faults to lose serve in that game in the second set, and her ball toss was a bit all over the place. If I’m coaching Brady, I would say, “Look, even if she’s serving you off the court, keep the scoreboard pressure on her by holding your own service games because it’s possible for her to lose rhythm on her serve sometimes.”

This is kind of like a men’s match. You lose serve in a men’s game and you’re in trouble, and with these two players’ big serves, it’s going to come down to that, as well.

Shriver: Both players’ big serves are very comparable, but Brady’s is a little different than Osaka’s — there’s more of a kick up to it. Brady’s forehand also might be as good as Osaka’s, but they hit it differently: Osaka’s is flatter, and Brady’s has more RPMs. But if Brady has a great day with both those shots, it gives her a reasonable chance.

But she has to have a complete match; she can’t be in and out like she was in her semifinal against Karolina Muchova. She has to stay consistent and be able to find the freedom she found in that semi at the US Open. She had a freedom about her that was so impressive in a big match. She needs to find that in the final.

Stubbs: Osaka has run the gamut with crowds in her three major titles. She had a crowd she probably wanted to hide from at the 2018 US Open, an adoring crowd at the 2019 Australian Open (when she won that incredible match against Petra Kvitova) and then won last year’s US Open with no one in the crowd due to the COVID-19 restrictions. In all three scenarios, she has done well. This match won’t have a full crowd due to pandemic protocols, so it will feel like a regular match for her.

I wouldn’t say the crowd is a bad thing for Brady, and it’s good it’s not going to be the packed stadium we normally would see. During the semifinals, we saw her turn to animate the crowd and was like, “Come on!” after she got to her first match point and it threw her. When I asked her about it afterward, Brady said she immediately thought, “What am I doing? Now I’ve got all this pressure on me to actually win the match.” She loves to entertain, but this isn’t an exhibition, and she has to be more businesslike with her emotions in the final.

Evert: The crowd would be a bigger factor if there were an Australian player playing. I think the fans are going to be cheering for both players’ good shots. Osaka is always a favorite wherever she goes, but the fans will be respectful for both. Once the pandemic started, I always said it’s a little bit easier for lower-ranked players because they’re not used to being on center court with 15,000 fans watching them. It took some of the pressure off — you can just go out there and play with no one watching like it’s an important practice match. It changes the dynamic and vibe with fans back, and Osaka might have an easier time readjusting to that than Brady.

Shriver: When we think about Brady’s best results — winning Lexington, making the semis of the US Open — it’s been during the pandemic and in front of no fans. I don’t think we know enough about her in front of a crowd at this point, so it feels like having the crowd there favors Osaka.

Stubbs: Tennis is the most incredible battle with your own self, as well as your opponent. It’s a mental battle like no other. When Osaka fought off two match points against Garbine Muguruza in the fourth round and got through that match, it turned everything around for her emotionally. She can get past anything on the court, and she is playing with house money now. She has played really, really well, really well since that match and she’s the favorite, so she will walk onto the court feeling as settled and as confident as she possibly can.

After their US Open meeting, if Brady can pragmatically look at it and say, “My tennis is there, my tennis can match Naomi’s,” that is a huge leveler. I was calling that match, and one of the things I wondered during the third set was if she really believed she was good enough to win the match. I always talk about the subconscious and conscious mind, and if they don’t agree with one another, it’s really hard to talk the other one into something. At the US Open, I thought her subconscious mind didn’t quite believe she was ready and good enough to win the match, so she needs to look at the match and realize the difference-maker might have been her lack of belief. If she can say, “This time, I really do believe,” she could win the match.

Evert: I’ve been most impressed with both players’ mental aspect of their games throughout this tournament. Osaka can just block everything out and play with such calmness and composure. She has had such a belief in herself, especially in the match against Serena, even when she trailed early. During Brady’s semifinal, she knew if it got to 5-all, anything could happen. The fact that she stayed calm and showed she could dig under pressure when she needed to is impressive. We know the physical skill set and powers of both players, but the mental part is a little tougher. They both have remained calm, and that can make a difference in a tough match.

Shriver: Brady beat Jessica Pegula, one of her close friends, in the quarters, and I don’t know if people understand just how tough that was. There’s a lot of emotion that goes into playing and beating a great friend. She did that and then had to play Muchova the next day, and I think that was part of the reason she didn’t play well. She couldn’t get out of her own way in the final game. It was 18 points long, and she had five match points. But she got it done, and now she has the regular 48 hours to prepare for Osaka and reset. Having lost the first set against Osaka in New York, she knows she has the ability to fight back if she needs to.

Osaka was clearly nervous in the beginning against Serena — her ball toss got a little wacky there for a while, but she recovered. Given the way she has been playing, her history in her previous three major victories, knowing she was able to beat Brady after Brady threw everything at her at the US Open, she has to be coming into this one with a lot of confidence. Until somebody can prove they can beat Osaka late in the majors, her winner’s mentality will be tough to stop.

Stubbs: I believe Jen Brady has the weapons and game to win a Grand Slam, but it might be a little too much to ask in her first Slam final. Osaka in three sets.

Shriver: Osaka was my pick to win it when the tournament began and Brady was my dark horse, so I’m going to enjoy this. I can see it going to three sets, but Osaka will win.

Is business the 'path to peace' in the Middle East?