Curtis Blaydes not worried about style points, believes wins will get him title shot 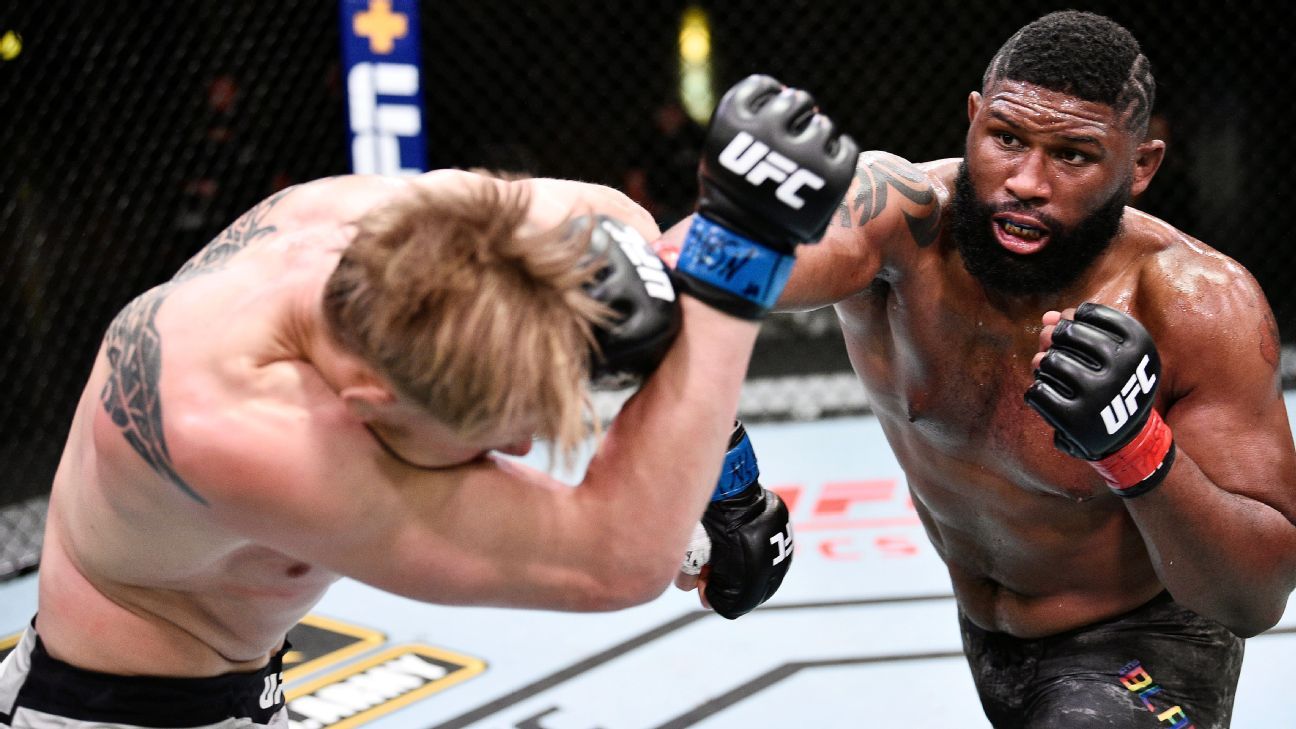 
Editor’s note: This has been updated since originally running on Nov. 25, 2020

Curtis Blaydes has won four fights in a row, two of them by knockout and the other two by thoroughly dominant beatdown. During an MMA career that spans 17 pro bouts over 6½ years, he has been bettered by only one opponent. Blaydes is No. 3 among heavyweights in the ESPN rankings.

And yet when he steps into the Octagon on Saturday night in Las Vegas to face fifth-ranked Derrick Lewis, a victory would propel Blaydes absolutely nowhere, not an inch closer to a championship fight.

ESPN’s No. 3 heavyweight Curtis Blaydes takes on No. 5 Derrick Lewis, as the two top contenders jockey for positioning just weeks out from Stipe Miocic’s title defense against Francis Ngannou. A victory on Saturday would mean immediate consideration for a future title shot.

The roadblock standing between Blaydes and UFC heavyweight champ Stipe Miocic is No. 2-ranked Francis Ngannou, and that is a barricade Blaydes has been unable to swerve around despite multiple attempts. Both times they fought, Ngannou won by knockout. Their most recent meeting, in November 2018, lasted all of 45 seconds.

Ngannou has firmly situated himself at the head of the line and will challenge Miocic for the belt on March 27 at UFC 260. There is no reasonable argument against that booking. Ngannou is on a roll that sends chills down the spines of heavyweights the world over. His second conquest of Blaydes started a run of four straight victories — all knockouts, all in the first round, all but one in the first minute. His most recent KO, over previously unbeaten Jairzinho Rozenstruik last May, took just 20 seconds.

As for Blaydes, he not only isn’t leapfrogging Ngannou, but it appears as though he is going to be the one leapfrogged.

That’s because there’s new blood at heavyweight. Former light heavyweight champ Jon Jones is going through with his plan to move up a weight class. Last fall he posted on social media photos of himself in the weight room with the caption ”240 feels great.” It looked great on him, too, every added pound, and Dana White apparently noticed. The UFC president confirmed last week that Jones’ heavyweight debut will be against the Miocic-Ngannou winner.

That matchmaking will not be 100% until there’s a bout agreement with two fighters’ signatures on it, but it’s safe to say there’s nothing Blaydes can do this weekend to avoid having Jones cut the queue ahead of him. And as unfair as that might seem, it’s simply what happens when a GOAT candidate such as Jones enters the picture. With unbeaten Khabib Nurmagomedov now in retirement, Jones is the sport’s pound-for-pound king, and MMA royalty is not kept waiting behind the velvet rope outside the nightclub.

Blaydes’ mission on Saturday is to ensure that the UFC keeps him near the head of the line, and there’s a complicating factor: He does not have White in his corner. In Blaydes’ most recent fight, a unanimous-decision win over Alexander Volkov last June, he had 14 takedowns and maintained top control for just under 20 of the bout’s 25 minutes. He landed twice as many significant strikes as Volkov, a top-10 heavyweight and former Bellator champ, and connected at an astounding clip of just under 70% accuracy. But Blaydes tired in the later rounds, and that became the focus of the UFC pooh-bah’s postfight comments.

“I don’t think you talk the s— that he did this week and come in and perform like that,” White said that night. “Talking about ragdolling people and he’s not getting paid and yada yada he should be getting the title shot. He gassed out at the end of the third round, made it to the fifth and won the fight.”

White scoffed at a reporter’s suggestion at the time that Blaydes might just wait in line for his title shot. “I wouldn’t wait around if I was him. I’d stay active,” White said. “When you talk the s– that he talked and perform like he did tonight, you look stupid.”

It’s likely that White’s problems with Blaydes weren’t confined to his fighting style. Notice the four words in the middle of his critique: “he’s not getting paid.” Blaydes has been outspoken about fighter pay and has talked in support of the athletes forming a union.

By taking a stance unpopular with the UFC brass, Blaydes has put a whole new layer of pressure on himself. Going forward, anything but a brutal finish or all-out beatdown runs the risk of being framed by White — a promoter who is no stranger to fighter-hyping hyperbole — as boring or in some way lacking. Blaydes has to perform and, yes, has to ramp up the entertainment.

Yet Blaydes, a man as strong-willed as White, doesn’t plan on changing a thing this weekend. Blaydes is gonna Blaydes. “If I win the exact same way, I would be fine, because guess what, it’s another win, it’s a win bonus,” he said. “I don’t know if a lot of people care, but I have a family. I’m trying to feed my family. I don’t care if you want me to risk my win bonus, which is $100,000, to stand and bang with a guy who has terrible wrestling. I’m just not going to do it. Unless you defend every takedown attempt, I’m not going to stop trying to wrestle you. You have to deter me, and I don’t think Derrick is going to deter me.”

Been seeing lots of different things in the media lately, I would absolutely love to fight for the UFC again. Really hope we can come up with a good financial agreement and give the fans a few more great fights. 🤙🏾

There is a middle ground, of course. Just ask Nurmagomedov whether it’s possible for a fighter to wrestle and entertain. Blaydes is not the type to turn in a five-second flying-knee KO, a la Jorge Masvidal, but he does have it in him to ragdoll someone for 25 minutes, and that can be exhilarating to watch.

Whether Blaydes recognizes it or not, the impression he leaves with fans and matchmakers with his performance on Saturday night will go a long way toward determining whether upward mobility is in his near future. If he handles Lewis the way he’s handled (almost) all who have come before, Blaydes can fortify his hard-earned position as a future title challenger or even a viable option in case the booking of Jones gets scuttled for whatever reason. (There is a history of the UFC’s plans for Jones falling apart, and Jones already has brought up the financial element on Twitter.)

In fighting a main event against Lewis, who has more knockouts than any heavyweight in UFC history, Blaydes has a spotlit platform and an opportunity to put on the kind of stirring performance that makes fans care about him and want to see him in the biggest fights. For a fighter who so relentlessly thrives on control, that appears to be all he can hope to have within his grasp.