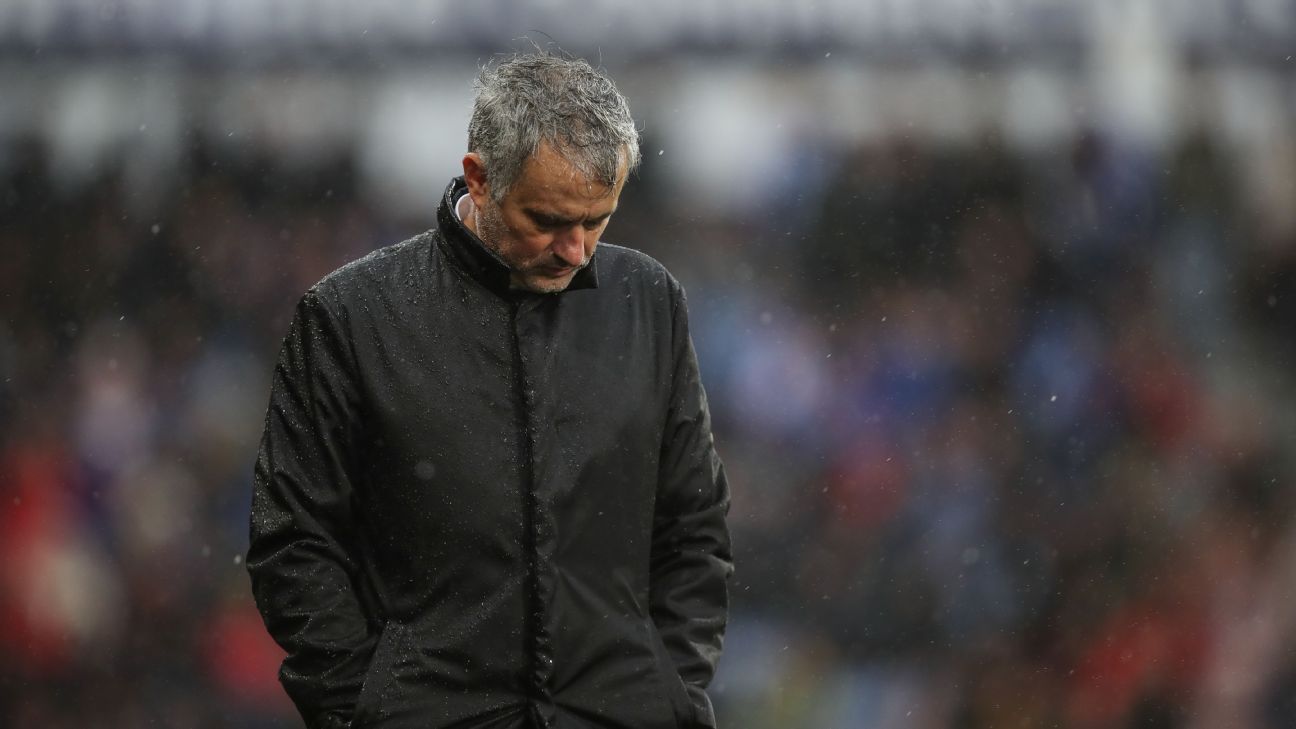 
Jose Mourinho could be spared until the end of the season, as Tottenham Hotspur ponder his future — ESPN’s Insider Notebook has the latest. PLUS: Why Man United passed on Dayot Upamecano.

Jump to: Man United passed on Upamecano | Alaba to Madrid not certain | Lazio to face relegation over COVID? | Third time lucky for Zidane’s son? | Italy seek the next “Chucky” | Rabiot, Ancelotti could reunite

Speculation in the media in England and Portugal has grown over Mourinho’s position as Spurs slumped to ninth in the Premier League table following four defeats in their last five matches.

Sources told ESPN that reports in Portugal claiming it would cost Tottenham around £30 million to sack Mourinho now are “broadly accurate,” since he has a contract without a break clause until the summer of 2023, but it is not just the financial situation that is buying the 58-year-old time.

The decision to delay the EFL Cup final from February to April has inadvertently helped Mourinho, given he can continue to deflect criticism by pointing to a Wembley showpiece that offers Spurs a chance to win their first silverware since 2008.

They face a daunting task against Manchester City, who have won their last 17 games in all competitions; nevertheless Mourinho was hired to win trophies and he is close to delivering in his first full season. There is also sympathy internally for the team’s run given three of those defeats came against Liverpool, Chelsea and City while captain Harry Kane was missing with ankle problems.

Mourinho won the Europa League four years ago with Manchester United, securing Champions League qualification in the process after finishing sixth in the League. Sources claim Levy is mindful the same could still be possible for Spurs, but Mourinho will have to deliver results in the short term, starting by progressing against Wolfsberger AC in their round-of-32-tie, and improving domestic results with West Ham, Burnley and Crystal Palace before the north London derby against Arsenal on March 13.

Sources claim the first-team squad remain behind Mourinho but it was noticeable that he offered an olive branch to Dele Alli and Gareth Bale — two individuals marginalised in recent months and singled out for criticism — by claiming “coaches sometimes can make wrong decisions.” — James Olley

Why Solskjaer opted out of Upamecano pursuit

Bayern announced they will sign Upamecano from RB Leipzig at the end of the season after agreeing to pay his €42.5m ($51m) release clause.

Sources told ESPN that the 22-year-old was of interest to United, particularly because of the release clause in his contract, but his representatives had already been informed of Solskjaer’s prerequisites before Bayern sealed the deal.

– Scouting report: What Upamecano will give Bayern

The United manager is hopeful of signing a centre-back in the summer and believes adding a left-footed defender will add more balance to his team.

Solskjaer’s preferred partnership this season has been captain Harry Maguire and Victor Lindelof, who are both predominantly right-footed. It has meant Maguire has often had to play on the left, after United’s only left-footed centre-back Marcos Rojo left the club for Boca Juniors in January.

As well as Maguire and Lindelof, Solskjaer has Eric Bailly, Phil Jones and Axel Tuanzebe as his other senior central defenders. If another centre-back comes in, United would be open to offers for Jones and could allow Tuanzebe, 23, to move on loan. — Rob Dawson

Alaba has Madrid agreement but could take his pick of Liverpool, Chelsea, Atleti

David Alaba’s agent, Pini Zahavi has received calls from at least eight clubs in Europe about his player. Alaba, 28, has decided to leave Bayern Munich on a free transfer at the end of the season.

Real Madrid are the front runners. They have a verbal financial agreement with Alaba and Zahavi, sources told ESPN. Los Blancos are keen on the full-back, especially if captain Sergio Ramos, whose contract expires at the end of the campaign, does not renew and moves on.

But Austria international Alaba is listening to other offers and will decide where to go. He could easily reach the same agreement with other teams and then take his pick.

Liverpool, Chelsea, Manchester City and Manchester United are all after him, as are Paris Saint-Germain, Barcelona and Atletico Madrid, but Chelsea and Liverpool are pushing the hardest regardless of Madrid’s confidence in winning the race.

Alaba is in high demand, not just because there won’t be a transfer fee to pay, but also because he is at the peak of his talent and is a versatile player with experience as a centre-back, left-back and defensive midfield.

His experience and success in two Champions Leagues, nine Bundesliga titles, and six German Cup wins makes him a rare player to get as a free agent. — Julien Laurens

Julien Laurens and Rodrigo Faez discuss whether David Alaba would be an upgrade on Sergio Ramos.

Lazio have been referred to the Federal Court in Italy for allegedly tampering with coronavirus tests and the Serie A giants face a sliding scale of punishments if found guilty, with anything from a points deduction to relegation to Serie B.

President Claudio Lotito and club doctors Ivo Pulcini and Fabio Rodia stand accused by prosecutors of having failed to properly report positive cases to the appropriate health authorities and not enforcing the mandatory 10-day isolation period for an asymptomatic player who was later involved in a league match. The player’s identity has not been made public and the Italian FA has deferred the matter to the Italian courts.

“We trust in sporting justice, which will be expressed in the appropriate offices, so that the correct reconstruction of the facts is re-established and total non-involvement with the contested accusations is recognised,” Lazio spokesman Roberto Rao said.

The investigation was opened on Nov. 3 when tests were seized following a training ground inspection. Lotito stands accused of having “failed to enforce, or failed to monitor compliance with, the rules on health checks and the necessary communications to the competent local health authorities.”

The Biancocelesti, who had points deducted in the Calciopoli scandal of 2006 which saw Juventus relegated from Serie A for attempting to influence match officials, could also face the drop if found guilty. Given the global effects of the pandemic, pressure would be on the Italian authorities to issue strong action if Lazio are found guilty of tampering.

Calciopoli isn’t the only example of big teams being punished with relegation for their crimes. AC Milan were also forced to drop down a division for match-fixing in 1980. — Andrew Cesare Richardson

Real Madrid’s injury crisis meant that Zinedine Zidane’s son Theo — a tall, elegant midfielder like his dad — was called up to train with the first team this week. The 18-year-old will be hoping to succeed where older brothers Enzo and Luca failed, and stake a claim for a place in the senior squad. Their careers haven’t exactly taken off since making their Madrid debuts in 2016 and 2018 respectively.

Enzo, who scored in his only appearance, a 6-1 Copa del Rey win against Cultural Leonesa at the Bernabeu, is without a club at the age of 25. He was released by Almeria in October, after unsuccessful spells in Portugal and Switzerland.

Goalkeeper Luca, 22, conceded four goals in his two games for Madrid, against Villarreal and Huesca. He has fared better than Enzo, and is now back-up keeper for Rayo Vallecano in Spain’s second division.

Theo, who has made two appearances for Madrid’s B-team Castilla, has long been rated by club insiders as the most talented of the four Zidane boys. Youngest Elyaz is a defender with the Under-16s, and his playing style is the most reminiscent of his father. — Alex Kirkland

Italy’s search for another ‘Chucky’

Lozano joined Napoli from PSV Eindhoven at the beginning of the 2019-20 campaign and after a difficult start to life in Serie A which even saw him kicked out of training for a lack of effort, the Mexico forward has grown to become an influential member of Gennaro Gattuso’s side. Sources told ESPN how Lozano has developed into one of the club’s leaders inside the dressing room.

Lugo spent 10 years as Victor Manuel Vucetich’s assistant at Chivas and it is at his former club where interest in unearthing the best talent in Mexican football lies.

“An Italian company invited me to look for players who could move to Europe and they have asked me for two players from Chivas,” Luga told ESPN Deportes. “They want players with certain characteristics who can be successful in Europe and this is thanks to ‘Chucky’ Lozano.

“This kid has surprised people in Italy as he showed himself to be a top player. He is well thought of there — more than in Mexico.

“When this company contacted me, they asked ‘Could there be more in Mexico, players with similar profiles to ‘Chucky?’ And I told them: ‘Yes, of course.'”

Lozano, whose injury during Napoli’s 1-0 win over Juventus last weekend could rule him out for a number of weeks, has nearly triple the amount of goals this term than last season, and in fewer games. He scored five in 34 matches across all competitions in 2019-20 as Napoli won the Coppa Italia but has already 13 goals in 32 games this campaign. — Andrew Cesare Richardson

Ancelotti keen on Rabiot at Everton

Everton boss Carlo Ancelotti played a huge part in the development of a young Adrien Rabiot from their time together at Paris Saint-Germain, and the two could be reunited next season at Goodison Park, sources told ESPN. Ancelotti is keen to strengthen his midfield and Rabiot’s profile is what he is looking for as an upgrade on Andre Gomes.

Rabiot, 25, can play anywhere across midfield but is a great box-to-box player with qualities that could suit the Premier League’s more physical nature. It is not clear yet if Juventus would let the French midfielder leave in the summer.

This season has been difficult for him under Andrea Pirlo with some under-par performances, while he was red carded during the 2-2 draw at Roma.

Ancelotti managed Rabiot at PSG when he was just 17. He promoted him to the first team squad in the summer 2012 and gave him his debut in Ligue 1 and in the Champions League in the first half of the 2012-2013 season.

The Italian was a big influence in Rabiot’s career, even advising him to go on loan to Toulouse in January 2013 to continue his progression. They have stayed in touch since and could work well together again next season. — Julien Laurens