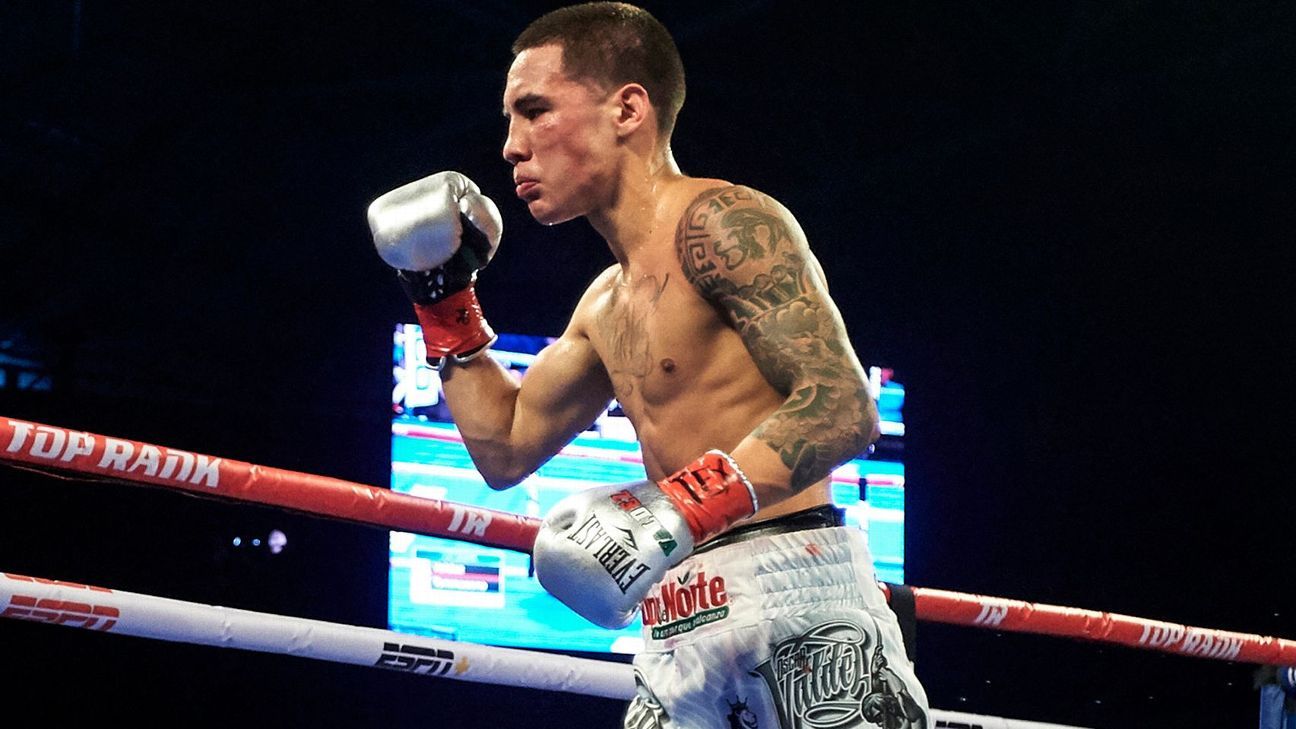 The seduction of Frank Espinoza — of Simmons Avenue in East LA, an occasional member of the City Terrace gang, son of a welder whose hands had been mangled by arthritis — began when he was a teenager, sometime in the mid-’60s, upon his maiden voyage to the Grand Olympic Auditorium, 1801 S. Grand Avenue, which, by then, was anything but grand.

He recalls an array of fight posters, one of them featuring a then-kid and future champion named Mando Ramos, who, in all, would fight 27 times at the Olympic between 1965 and 1973. The pale yellow walls were blistered and lumpy. The air thick, brownish and stale from filterless cigarettes. Men in fedoras and short sleeves held wads of worn bills. The betting was fevered and continuous. Cans of Pabst Blue Ribbon would become makeshift projectiles when the crowd deemed the action insufficiently bloodless.

Espinoza was hooked, instantly. “I knew right then I wanted to be in boxing,” he says.

More than half a century later, Espinoza has managed well over 100 fighters, all of them Mexican or Mexican American, including 10 champions. The first, Isidro Garcia, was eating a hot dog and drinking a Coke in the stands at Fantasy Springs Casino when he was invited to compete for the WBO flyweight title, as the opponent had just fallen out. The most recent is Oscar Valdez, Mexico’s two-time Olympian, a former featherweight champion. On Saturday in Las Vegas, Valdez fights his erstwhile friend and neighbor from Hermosillo, WBC junior lightweight champion Miguel Berchelt, the division’s boogeyman.

Hence, you’ll hear a lot decreed with absolute authority about “Mexican Warriors,” fighters whose pride supposedly commands them to never back down. It’s a subject of which Espinoza acquired his expertise the hard way. “The guys I compare to Oscar and Berchelt are Vazquez and Marquez,” he says.

He’s referring to Rafael Marquez and Israel Vazquez, whom he managed. They split their battles between 2007 and 2010, the second and third being designated by Ring Magazine (among others) as Fights of the Year — not despite their spectacular brutality, of course, but in great measure because of it.

I remember Vazquez at his home in Huntington Park after the third fight. Earlier that morning, the stitches — no fewer than two dozen — had been removed. You wouldn’t call him healed — not judging from that purplish slit above his red eye — but he was in great spirits.

In fact, his was a satisfaction bordering on ecstasy. Just a few years prior, a promoter had advised Espinoza to send Vazquez home to Mexico City — that there was no future for him fighting in the States. Still, Espinoza had a feeling, and let the kid stay in his home for a year or so.

Now Vazquez was a man, with two sons of his own. He owned his own home. He set up his wife in the beauty parlor business with his winnings. And he’d just won the fight of the year.

The problem was, he wanted to do it again — a fourth fight with Marquez. “I didn’t want him to fight again,” says Espinoza, “but I couldn’t stop him. He felt his honor was at stake.”

It’s not a subject Espinoza likes to talk about, though I’ve wondered if it informs his curious mother hen reputation (curious only in boxing, that is) for “babying” his fighters. Among those it is whispered he has somehow indulged is Valdez, who aspires — to a fault — to be the archetypical Mexican Warrior.

In 2018, Valdez fought Scott Quigg, who weighed in almost four pounds heavy for a featherweight title fight. Espinoza urged him to call it off. Valdez wouldn’t hear of it.

In the fifth, Quigg broke his jaw. It was a gruesome break, leaving the trainers unable to remove his mouthpiece, and made his mouth a bloody lagoon. But over the next seven rounds, Valdez’s response was to pick up his attack and win by unanimous decision.

“That’s something I’ve always wanted ever since I was a little kid,” he told me the following year.

He wasn’t talking about the jaw. He was talking about the recognition back home in Mexico, where more than a few fans thought Olympic-style boxing was, well, cushy. “Everybody looks at me like a warrior, a true champion,” he said. “And that, sometimes, is worth more than money.”

After the Quigg fight — Valdez’s third consecutive “war” — Espinoza implored him to hire the renowned Eddy Reynoso as his trainer. The idea was for Reynoso — best known for his work with Canelo Alvarez — to extend his career by making Valdez a better defensive boxer. But the results, to this point, have been uneven.

Berchelt, on the other hand, is who he is: bigger, stronger, and at five inches longer, the most feared fighter in the 130-pound division. “Everybody considers him the monster,” Valdez told me this week. “I don’t see it that way. He hasn’t fought a guy who can box. He’s slower. I see a lot of openings.”

Still, at some level, Valdez believes he can out-Warrior Berchelt. The only time Berchelt was knocked down — a shocker, in the first round against a guy named Luis Florez back in 2014 — he was knocked out. Valdez has been knocked down twice and won each time, by unanimous decision and TKO. Then there’s the jaw. But that’s not all.

“Two times I fought with a fractured rib,” he says, referring to injuries sustained in sparring before his first title defense and his hard-fought battle with Miguel Marriaga. “That’s something I’ve never said before because I didn’t want to make excuses.”

But now it’s something he wants Berchelt to know.

“He hasn’t been through what I have,” Valdez says. “I don’t think, ‘What if it happens again?’ But I know if I can fight through a broken jaw, or a broken rib, or get off the canvas, I know I will always get through it. I know I will be victorious because of my mindset. Losing is never an option.”

I ask him about Espinoza.

Espinoza, for his part, hopes the Nevada State Athletic Commission will allow him to perform his customary self-appointed duty. He likes to walk his fighters into the ring, to give each one his mouthpiece, to send him into battle. But he’s not sure what officials will allow in the Top Rank bubble.

It’s not that he minds the bubble so much. It’s not that he’s living in the past, either. But for one night, he will miss the cigarettes and beer, the seductive stink of a communal bloodlust. He’ll miss the men in hats waving bills, the profane oaths that they made, and the patriotic ones too:

“A fight like this,” says Frank Espinoza, “would have been great at the Olympic.”

Man who grew up homeless in engineering program