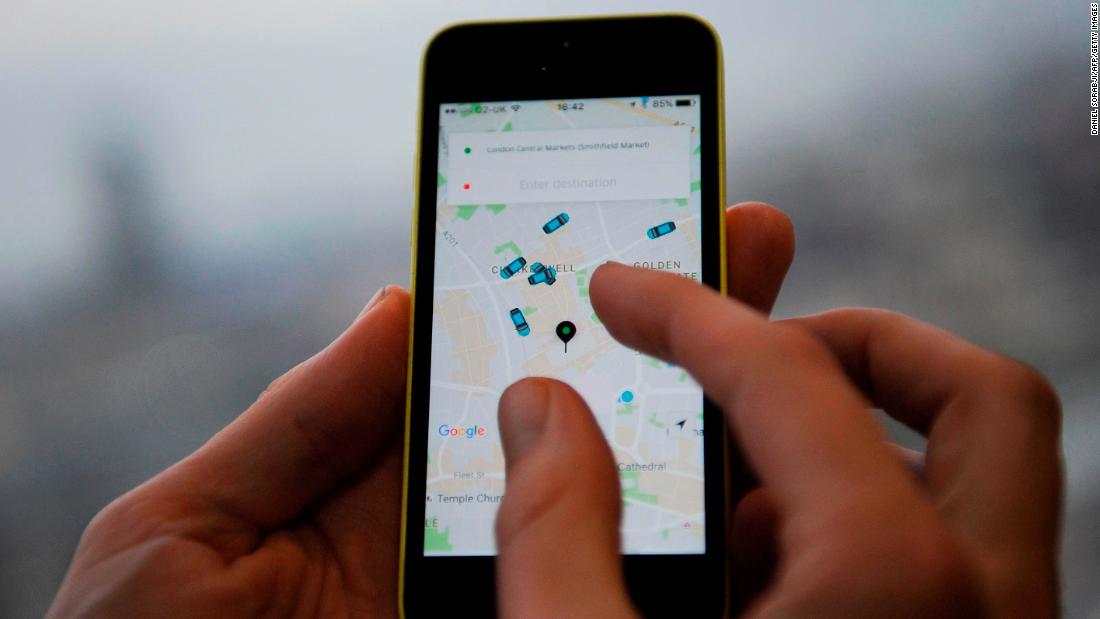 The unanimous decision could deliver a major blow to the company’s business model in one of its most important markets, and opens the door for drivers to claim the minimum wage and paid time off, legal experts said.

The court said Friday that the group of Uber drivers that brought the case to an employment tribunal were not independent contractors because their activities were “very tightly defined and controlled by Uber.” The judge cited the company’s control over fares and how it dictates the contractual terms on which drivers perform their services.

While the practical effects of the ruling are not yet clear, the decision could change how Uber (UBER) does business in the United Kingdom. The next step is for an employment tribunal to decide how to compensate dozens of claimants. Uber shares were down 2.5% premarket in New York.
The case may also set a precedent for other workers and companies in the broader gig economy, which has thrived during the pandemic due to a sharp increase in demand for food deliveries and other services.

The suit against Uber was first filed in a British employment tribunal by Yaseen Aslam and James Farrar in 2016 when the two men were driving for Uber. Aslam used to work for another company, but said he was lured to Uber by lucrative pay and bonuses.

But Aslam claimed the perks quickly dried up as more drivers joined the platform, resulting in fewer rides and lower fares. The pair of drivers prevailed in the employment tribunal and then in two subsequent appeals by the company.

Aslam told CNN Business on Friday that the compensation he stands to gain is “small” compared to the effort that was required to bring the suit. “But the point was, someone had to do it,” he said.

“I think the right thing for Uber to do is if they want to continue, they can continue, but they just need to respect their workers, the people that are the backbone of this industry,” he added.

The case now goes back to the employment tribunal, which could order Uber to pay compensation to about 20 original claimants. Thousands more Uber drivers have taken legal action against the company, and the decision could be quickly applied to them. Drivers who used the platform at the time of the suit may also be eligible to make a claim for compensation.

The court also ruled on Friday that drivers are working from the time they turn on Uber’s app, rather than only when transporting passengers, as the company had argued. The decision could have significant consequences for how the company conducts business and how many drivers it allows on its app.

Uber said in a statement that it was “committed to doing more and will now consult with every active driver across the UK to understand the changes they want to see.”

“We respect the Court’s decision which focused on a small number of drivers who used the Uber app in 2016. Since then we have made some significant changes to our business, guided by drivers every step of the way. These include giving even more control over how they earn and providing new protections like free insurance in case of sickness or injury,” said Jamie Heywood, Uber’s regional general manager for Northern and Eastern Europe.

The decision is a significant defeat for Uber in the United Kingdom, where it has come under pressure from labor activists and transportation regulators. Much of the action has taken place in London, one of the world’s most important cities for the US tech company.

Uber said before the pandemic that 3.5 million Londoners regularly used its app and it claimed 45,000 drivers in the capital. But the company has repeatedly sparred with regulators in the city over safety issues.

Philip Landau, an employment lawyer at Landau Law in London, said that Friday’s ruling would have broad implications for the way that Uber treats its UK workers. They would, for example, be entitled to “claim the national minimum-wage being based upon their entire working day, not just when they had a rider in their cabs,” he said.

“As long as the other drivers’ contracts and set of circumstances mirror what the tribunal have considered, it opens up the floodgates for similar claims if Uber do not now make appropriate payments to their drivers reflective of their ‘worker status,’ ” he added.

The UK court decision comes just months after Californians voted to make Uber and other gig economy companies exempt from state laws requiring them to class their drivers as employees rather than independent contractors.

Being classified as employees would have entitled workers to a minimum wage and benefits like sick leave and unemployment insurance. Uber and other gig economy giants like DoorDash and Instacart spent more than $200 million to publicly advocate for the exemption.

Before the UK ruling was handed down, Uber said that it was committed to doing better for its drivers regardless of the outcome.

“We believe all independent workers deserve to earn a decent wage,” Uber CEO Dara Khosrowshahi wrote in a blog post.

“We’re calling on policymakers, other platforms and social representatives to move quickly to build a framework for flexible earning opportunities, with industry-wide standards that all platform companies must provide for independent workers,” he added.

Why Gadhafi’s private jet is stranded in southern France

How a tiny radioactive capsule was found in Australia's vast outback

Trade for these players before it’s too late

Opinion: Mike Pompeo takes a blowtorch to ‘the…