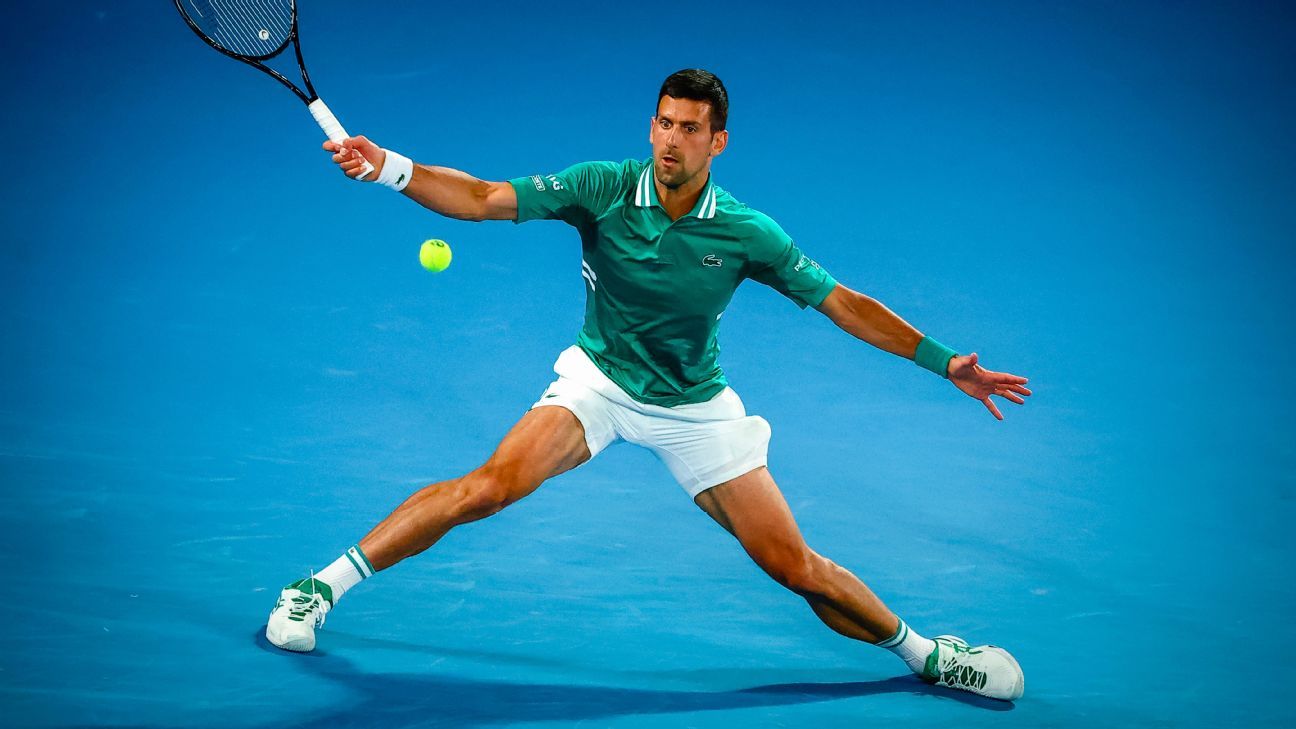 
MELBOURNE, Australia — The extreme speed of Melbourne Park’s courts have been the talk of the 2021 Australian Open.

Dominic Thiem, a finalist last year, called the terrain this year “the fastest Grand Slam courts I have ever played on.” Jim Courier, a two-time champion of the tournament, likened the surface here to “playing on glass,” where at times it’s “near-impossible to see the ball.”

While it’s not uncommon for the pace of a hard court to vary from one year to the next, the extreme rise in speed from last year is unusual. Balls are skidding off the blue hard courts faster than ever, giving players far less time to react, track it down and play a return shot.

This would seemingly give the game’s power servers and heavy ball strikers an advantage, although that hasn’t been the case. Big servers Nick Kyrgios, Reilly Opelka, Alexander Bublik, Lloyd Harris and Feliciano Lopez all failed to reach the fourth round of the tournament.

Instead, a familiar face seems to be thriving under the new conditions in Melbourne, taking his already jaw-dropping game to almost unbeatable levels.

World No. 1 Novak Djokovic has won a record eight Australian Open singles titles and will be vying for a ninth when he takes on Daniil Medvedev in Sunday’s final (3:30 a.m. ET, ESPN/ESPN App). The Serbian has never lost a final at Melbourne Park, is a perfect 17-0 from the semifinal stage onward and since the courts turned blue ahead of the 2008 tournament, holds a staggering 78-5 overall record.

Clearly, Djokovic is the last player who needs any sort of advantage at Rod Laver Arena, a court he labeled “his second backyard” earlier in the fortnight, but it looks as if the speed may be offering him an unexpected one.

The 17-time Grand Slam champion has set the benchmark for defensive tennis over the past decade and a half, often being described as a brick wall with his ability to use his speed and agility to track down balls all over the court. But if there was any weakness in his game, relative to some of his contemporaries on the Tour, it would be his serve.

Prior to this fortnight in Melbourne, Djokovic had hit 5,923 aces throughout his illustrious career. That equates to 0.43 aces per service game, 2.08 per set and 5.4 per match. By no means has he struggled in this area, proving to be one of the most difficult players on Tour to break, but historically his serve hasn’t won him a lot of cheap points.

This year at the Australian Open, courtesy of the extra zip and pace on the courts, Djokovic’s service numbers have skyrocketed. Through his six matches en route to the final, he has sent down 100 aces, considerably more than anyone else in the tournament. Only two others managed to reach 80, Alexander Zverev (86) and Milos Raonic (82). Unless Medvedev sets a new record for aces in a Grand Slam final, Djokovic will finish the tournament on top of the aces leaderboard, the first time he has ever managed the feat at a major.

“This is the quickest speed of court I have ever played on here in 15 years,” Djokovic said during the first week of the tournament. “It’s like playing on ice.

“If I serve well, it does help me. The courts are much more suitable to big servers [this year]. If you can get accuracy on your serves, you can win a lot of free points there.”

It’s not as if he’s upped his service speed. Djokovic’s fastest serve of the tournament came in his quarterfinal match against Alexander Zverev, when he sent an ace down the T at 206 kph. Last year, Djokovic’s fastest serve in Melbourne was also clocked at 206 kph. Instead, the extra aces and cheap points he’s winning are coming courtesy of the court’s lack of grip, which is shaving less speed off the ball and allowing it to skid faster.

Sure, Medvedev will be able to gain a similar benefit during his own service games in Sunday’s final, but Djokovic’s weakness, if you could even call it that, has been nullified.

“There is no weakness there at all,” tennis great Mats Wilander said of Djokovic and his serving. “He is serving big and able to serve aces on some breakpoints. That is a Djokovic we never really talk about. He can see the finish line on Sunday, and he will be very tough to beat.”

There are a number of factors which contribute to the fluctuation of court speeds at the Australian Open. Each year, before the tournament begins, all 16 courts at Melbourne Park undergo resurfacing. They are washed, polished and finally applied with a fresh coat of GreenSet acrylic paint. This paint contains granules of sand, and it’s the amount of sand used which determines the speed of the courts.

“The more sand they put in the paint, the slower the courts are. They become a little bit grittier, like sandpaper,” ESPN analyst Darren Cahill said. “The feedback from the players last year was that the courts were playing medium-paced, but after two or three games the balls fluffed up and became quite slow. So this year, they tried to speed the courts up a little bit by taking some sand out of the surface.”

Historically, Tennis Australia has aimed to produce courts which land somewhere in the middle of the International Tennis Federation’s five-tier Court Pace Index (CPI), as it generally offers up the best tennis for viewers, without favoring a particular style of player. A CPI rating of 29 or lower is considered a “slow court,” while anything above 45 is graded as “fast.”

According to Hawk-Eye, the average CPI at the Australian Open over the past five years is 41, making it consistently a “medium-fast” surface, and still clearly the quickest of the four Slams. However, this year, the CPI has been measured at 50, confirming players’ comments about just how fast the courts are playing.

Another factor which has led to quicker courts in 2021 is simply the amount of tennis played on them. Unlike previous years, in which Australian Open warm-up and lead-in events are played around the country, COVID-19 and restrictions around the virus forced the majority of tennis to be played at Melbourne Park, including the Great Ocean Road Open, Murray River Open and ATP Cup. As a result, a fortnight of tennis in Melbourne quickly blew out to more than a month.

“The more tennis you have, the more players are sliding across the court and more of that sand and grittiness gets taken off the court,” Cahill said. “As the tournament progresses, it only quickens up more and more.”

Judging by what Medvedev dished up in Friday evening’s second semifinal — dominating world No. 6 Stefanos Tsitsipas 6-4, 6-2, 7-5 in two hours and nine minutes — we could be in for another epic Australian Open final.

Three of the past four men’s finals at Melbourne Park have required a fifth set, and two of them have been won by Djokovic. And this year, the 33-year-old might have an unexpected advantage.