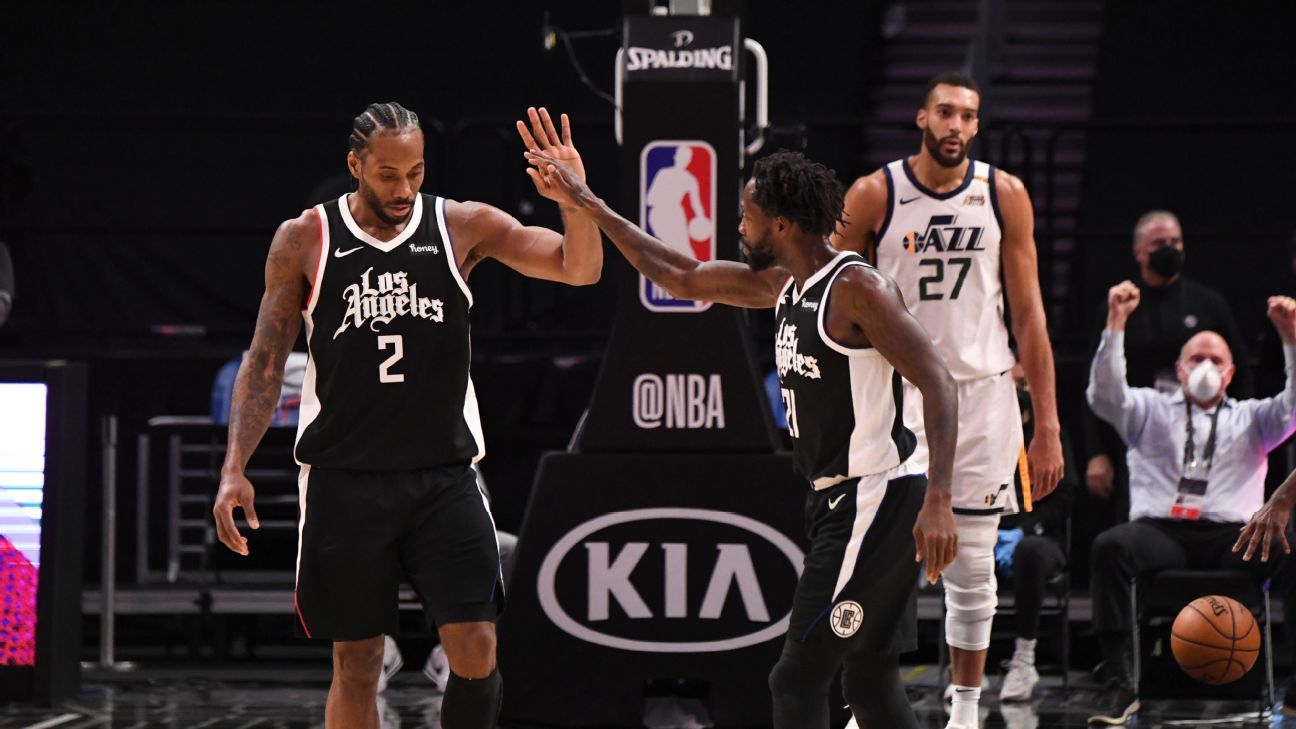 
LOS ANGELES — The LA Clippers got Kawhi Leonard and Paul George back on Friday, and the timing could not have been any better.

The surging Utah Jazz, winners of 20 of the previous 21 games, including an 18-point win over the Clippers on Wednesday, were back in Staples Center for a second straight game. And the Clippers wanted to show where they stood against the top team in the West standings.

Leonard scored 29 points and came up with two big offensive rebounds in the final minute to help the Clippers hold off the Jazz, 116-112, and snap Utah’s nine-game winning streak.

“They are the best team in the NBA right now record-wise,” Clippers coach Ty Lue said. “We knew that they won 20 of 21 coming into tonight. We got our guys back, and we wanted to win this game.”

“I’m just happy I was able to get out and play today,” said Leonard, who wore a sleeve on his lower left leg. “We were able to be healthy and get our starting five out there, and that’s what it’s about. We want to get better. We haven’t got a chance to really play with a full, healthy roster the last two weeks or so. So hopefully we can have some blessings and be able to stay healthy to finish till the All-Star [break] is started.”

The Jazz (24-6) also had Mike Conley back in the lineup for this showdown between two of the West’s best teams. Conley scored 16 points but it was Donovan Mitchell who nearly kept the Jazz’s streak alive. Mitchell scored 35 points, 29 coming in the second half. The guard scored 12 points in the final 1:23 when he helped Utah slice a 13-point deficit late down to two with 13 seconds remaining.

Rudy Gobert said the game “felt like a playoff game — the intensity, the tough shots that they were making all night.”

For Utah, this was a rare tight game. During their 20-1 stretch, the Jazz had logged just seven minutes in clutch time, when the score is within five points in the final five minutes. That is the fewest in the NBA over that span.

“There’s so many different things that we’ve seen throughout this stretch,” Mitchell said. “We’re not here to be satisfied with what happens today, tomorrow. We’re getting ready for the long haul — second half of the season and the playoffs. We’ve got to continue to be this team and not just be this team in the first half of the season.”

They’ll need a healthy Leonard and George to go further this season. George said that he had been playing with a sore toe and was able to manage it with a day off in between games until playing in a back-to-back against Brooklyn and Cleveland. George then experienced swelling and had to be shut down until the swelling and pain subsided.

“We played Brooklyn and then Cleveland, two tough games that really caused me to have to dig down and push, plant and play off those toes,” said George, who had 15 points, six rebounds and five assists in 27 minutes. “Just that back to back kind of tipped me overboard and I couldn’t recover, I needed some time off because it was swelled up. i just tried to keep it rolling for the team and it wound up creeping up on me.”

“I feel good,” George added of how his toe felt coming out of the game. “Just getting back into the swing of things.”

The same could be said for the Clippers, who were glad to have their stars back healthy against the red-hot Jazz.

“We’re basketball fans at the end of the day, and, of course, you see the noise being made throughout the season,” Patrick Beverley said of the Jazz’s 20-1 stretch. “We actually wanted the one that we gave up, we kind of ran out of gas towards the end [on Wednesday]. You gotta give credit to Utah. They got a hell of a system, hella players, the coaches.”

“It was a hard game, and that’s the type of game you want in the NBA, and we’re fortunate to get a win for sure.”