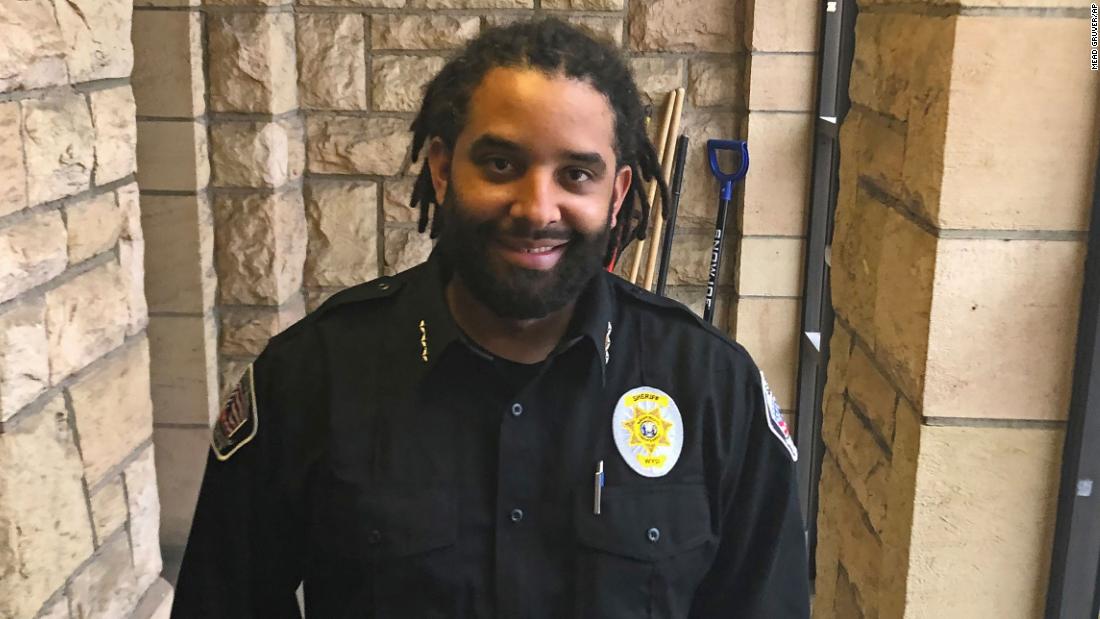 Aaron Appelhans, 39, has taken charge of the Albany County Sheriff’s Office, which faces two pending lawsuits and calls for reform in the aftermath of the fatal shooting of Robert “Robbie” Ramirez by a deputy in 2018.

“You don’t see a whole lot of African Americans in law enforcement,” Appelhans told CNN. “So, I’m trying to overcome that roadblock of taking a non-traditional career path and affect change within my community.”

Wyoming is known as the “Equality State” because it was the first in the country to grant women the right to vote and hold office in 1869.

While the state has a history of opening doors, Appelhans said, it still has a long way to go before it lives up to the motto.

“We are stepping out and getting people of color into offices and being the first, he’s broken the barrier,” Latham said. “I think it will make room for people to stand on his shoulders.”

The racial disparities in sheriff’s offices are a nationwide trend, even in states with large non-white populations, according to a 2020 report by the Reflective Democracy Campaign.

White males hold 90% of the 3,000 sheriff positions across the United States, while White males only account for 30% of the US population. Only 5% of sheriffs nationwide are African American, the report says.

According to the most recent data compiled by the Reflective Democracy Campaign in 2019, over 20 states across the country had not elected any Black sheriffs.

Wyoming’s first Black police chief, James “Jim” Byrd in Cheyenne, was appointed in 1966, according to Byron Oedekoven, executive director of Wyoming Association of Sheriffs and Chiefs of Police.

Appelhans was appointed by the Albany County Board of Commissioners on December 11, 2020, to replace Dave O’Malley. The end of O’Malley’s 10-year tenure was roiled by the killing of Ramirez by Deputy Derek Colling during a traffic stop in November 2018.

Ramirez’s death sparked protests and calls to fire Colling, who is currently still with the department but was moved to a detective role and was taken off patrol, according to Sheriff Appelhans.

A grand jury, however, decided not to indict Colling of involuntary manslaughter two months after the incident.

The public outrage over Ramirez’s death further fueled protests in Wyoming last summer amid nationwide demonstrations against police brutality and racial injustice following the killing of George Floyd.
O’Malley’s retirement in September came just days before Ramirez’s mother Debra Hinkel filed a lawsuit against Colling, O’Malley and the county commission for “the negligent and willful and wanton misconduct” resulting in the death of her son.

Ramirez, 39, was “visibly unarmed at the time he was killed while posing no immediate threat” to Colling or the public, according to a complaint filed in US District Court.

Lawyers for Colling and the Albany County Commission declined to comment on the lawsuit due to pending litigation. Attorneys for O’Malley could not be reached for comment when contacted by CNN.

Last spring, the office was hit by a separate lawsuit by a University of Wyoming student. The lawsuit alleged two sheriff’s deputies pressured the student to recant a sexual assault allegation against another student.

Appelhans, a Denver, Colorado, native, graduated from the University of Wyoming in 2003. He was a member of the Association of Black Student Leaders, which he said provided educational and social opportunities for other minority students on campus.

The small group of students established a commemorative event around Martin Luther King Jr.’s birthday to bring more awareness to the civil rights icon and Black history. Their efforts laid the groundwork for many of the activities the university now does in celebration of Black History Month, according to Appelhans.

In 2009, Appelhans was recruited to be a crime prevention specialist for the university’s police department. He later moved into a detective role as well, which he held for five years before becoming a patrol sergeant.

The university’s police chief, Mike Samp, recalled that Appelhans was “truly involved on campus and with the broader community” as a campus officer. In his role as a crime prevention specialist, he focused on sexual assault cases and working with victims of sexual assault.

“When you’re in middle management,” Appelhans said, “some of the changes that you want to institute come to some kind of roadblock where you just can’t get it done and you can’t find the people to help you get it done.”

The ability to influence real change is one of the main reasons he wanted to become a sheriff, Appelhans said.

The biggest challenges Appelhans faces are changing the perception of the Albany County Sheriff’s office and spearheading criminal justice reform within the department, he said.

But conflicts within the department may present issues, according to state Rep. Karlee Provenza, the chair of who chaired the sheriff screening committee and the executive director of Albany County for Proper Policing.

“He’s coming into an office that has a very strong network of ‘the good ol’ boys,'” Provenza said, which she defines as certain officers who are invested in protecting the agency above the community as a whole.

Albany County has a history of being a “progressive stronghold” in the “red” state of Wyoming, according to history professor Phil Roberts of the University of Wyoming.

But a tense racial climate still persists, and the way that people of color are treated in the city of Laramie will likely present hurdles for the sheriff’s progressive agenda, said Timberly Vogel, a member of the Laramie Human Rights Network, a racial and criminal justice advocacy group that organized dozens of protests last summer.

Appelhans’ appointment occurred because of his record and qualifications, not a greater commitment to diversity in Wyoming, she said.

In December, Republican state Rep. Cyrus Western responded to Appelhans’ appointment with a racist tweet featuring a clip from the film Blazing Saddles, which showed a Black character saying, “Where the white women at?” Western later apologized for his tweet, which has since been deleted, calling it “dumb and uncalled for.”

“There were not many people who wanted to put their name and face behind the sheriff’s office” because of the lawsuits and the department’s reputation, Vogel said.

Sheriff Appelhans said he is already implementing new practices and procedures within the department.

He plans to start recruiting underrepresented populations into the agency, specifically women and people of color. Investing in additional body cameras and equipment is another priority, as well as training officers on crisis intervention, de-escalation, trauma-informed investigations and bias-informed investigations.

Appelhans will rely heavily on a community-policing model, which aims to develop stronger community relationships and partnerships.

“We’re peace officers,” Appelhans said. “So, we don’t have to have a law enforcement response to absolutely everything.”

His stance reflects a larger movement in police agencies to train officers in crisis intervention, and a debate on whether law enforcement should be the first to respond to mental health emergency calls.

In his capacity managing the county detention center, the sheriff said he will focus on making sure that people who need to go to a hospital, rehab or mental health facility don’t just end up in jail.

“Criminal justice reform is trying to change those processes here at a local level,” he said, “where people can get the appropriate resources they need based on the call of service.”

Paul Weaver, the mayor of the Albany County county seat, Laramie, said the city leadership will partner with the sheriff on implementing reform practices.

Appelhans can play a “significant role” in changing some of the agency’s policies and practices, he added.

“Everything we’re doing now is to start over fresh,” Appelhans said. “I would hope that the community can look at us and be able to trust that we are here to serve them.”