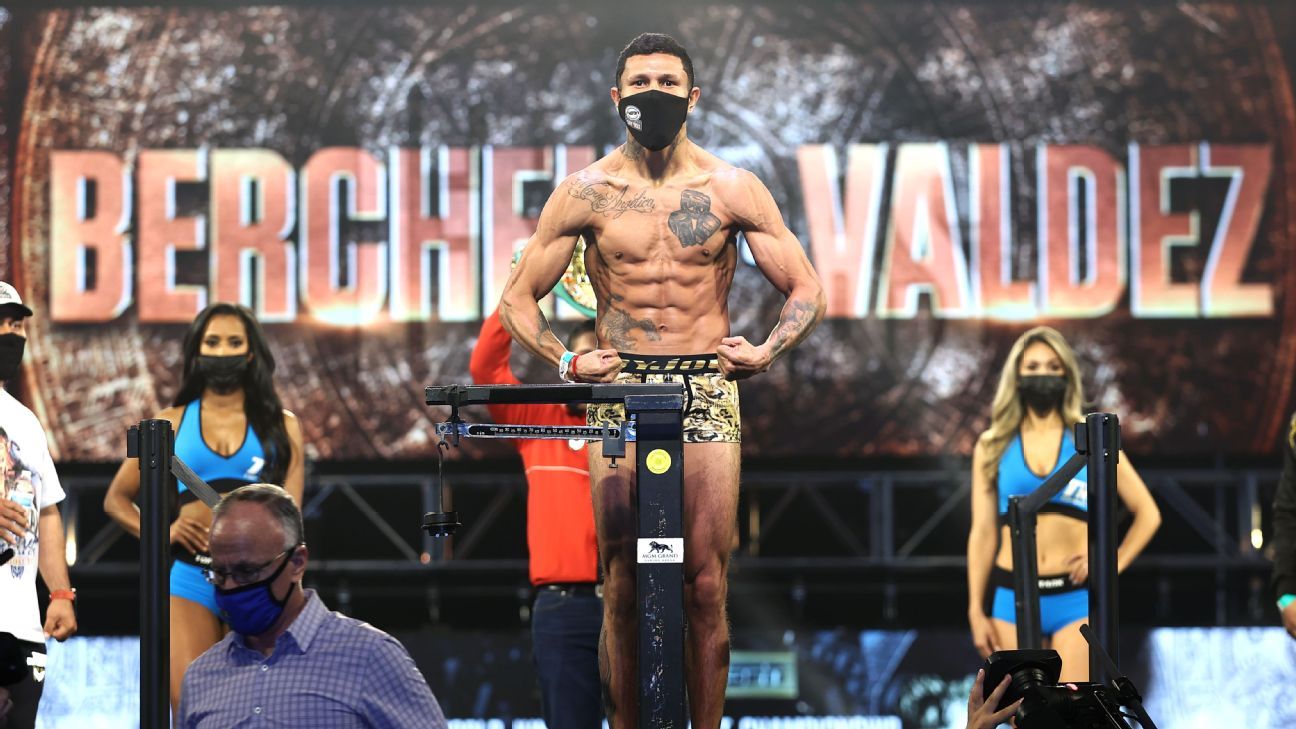 Gabriel Flores Jr. isn’t really known as a power puncher, but you wouldn’t know that from the conclusion of his junior lightweight bout on the Miguel Berchelt-Oscar Valdez undercard Saturday night at the MGM Conference Center in Las Vegas.

Flores (20-0, 7 KOs) dropped the hammer on Puerto Rico’s Jayson Velez (29-8-1, 21 KOs), as he knocked Velez to the ground with a punishing left hook counter in the sixth round, and finished him off with a flurry along the ropes at the 1:47 mark. It was Flores’ first knockout in seven appearances dating back to 2015.

The finishing sequence seemingly came out of nowhere. Flores was clearly winning at the time of the stoppage, but he hadn’t shown a ton of aggression. He enjoyed a visible speed advantage over Velez, and was using that speed to touch him with the jab and counter effectively any time Velez leaned in with a labored punch.

That changed almost midway through the sixth, when Flores wobbled Velez with the left hook. Velez couldn’t hide the fact he was hurt, as his entire body pitched forward and he fell to the canvas. He worked back to his feet but was still off-balance, and he looked unsteady even when referee Tony Weeks resumed the action. Flores put him down again moments later, and that was the end of it.

Velez, 32, came in with his back against the wall, having suffered back-to-back losses in 2020 to Jaime Arboleda and Oscar Valdez. Valdez knocked Velez out in the 10th round of their bout in July.

For Flores, who fights out of Stockton, California, it was exactly the high-profile result he was looking for. Saturday marked just the second 10-round scheduled fight of Flores’ career. He signed with Top Rank when he was 16.

Akavov’s corner stopped the fight at the conclusion of the fourth, after informing ringside officials of lost vision in the left eye and an apparent broken nose. It was a merciful result, as Akavov (20-4, 9 KOs) had turned into a sitting duck for Falcao’s punches as early as the second round.

Falcao (28-0, 20 KOs) calmly cut off the ring, stuck him on the ropes and peppered him with stinging combinations. Outside of an aggressive opening round, Akavov’s offensive output basically ceased to exist. He did not look comfortable answering Falcao’s punches along the ropes and rarely threw more than one punch at a time.

Falcao mixed his shots well to the body and head. Akavov routinely shook his head as if to suggest the shots weren’t getting through, but it was obvious Falcao was efficiently wearing him down.

An Olympic silver medalist in 2012, Falcao went 2-0 in 2020, fighting exclusively in his native Brazil.

Rodriguez goes the distance for the first time against Veron

Junior welterweight Elvis Rodriguez was forced to claim his first-ever win on the scorecards on Saturday, although that might not have been the worst thing in terms of his development.

The 25-year-old cruised to an eight-round decision over Luis Alberto Veron via scores of 79-73, 79-73 and 78-74. It is the first time Rodriguez has gone the distance in his two-year professional career. Rodriguez (11-0-1, 10 KOs), who trains under Hall of Fame trainer Freddie Roach, was patient early against his more experienced opponent. He started to wake up in the fifth and sixth rounds, as he landed hard body shots and a clean right hook. He appeared to hurt Veron (18-3-2, 9 KOs) late in the sixth.

The power difference was visible from the start, and grew more pronounced as the fight progressed. By the final two rounds, Veron’s face showed bruising and swelling under the left eye, and the little zip he did have on his punches early on, faded almost entirely. The Argentinian continued to come forward in the final 10 seconds, though. It was not the most scintillating performance of Rodriguez’s career, but it provided valuable ring time and his unbeaten record remained easily intact.

Veron has suffered all three of his pro losses in his past four fights.

Xander Zayas, one of Top Rank’s most prized prospects, continues to progress nicely as he thoroughly dominated James Martin over six rounds in their welterweight clash.

Zayas (7-0, 5 KOs), of San Juan, Puerto Rico, set the tone early with heavy left hooks to the body, followed by combinations to the head. Martin (6-2, 1 KO), a 23-year-old fighting out of Philadelphia, showed heart in the pocket and fired back with bad intentions, but Zayas’ defensive skills proved to be equally impressive to his offense. He routinely slipped out of harm’s way, and fired back with thudding shots to Martin’s midsection.

The 18-year-old welterweight failed to record a knockout for the first time in four appearances, but that did little to dampen the performance. He strung together a lot of unanswered punches on the ropes near the end of the fourth round and appeared to hurt Martin with a looping overhand right in the fifth, but Martin was never in serious danger of being stopped.

Zayas, who signed with Top Rank at the age of 16, picks up the second win of his career in Las Vegas. This was his first appearance in Top Rank’s bubble, as he fought exclusively in Florida in the second half of 2020.

Martinez finishes Wagner in the first round

Martinez (3-0, 1 KO), 25, staggered Wagner (3-2, 1 KO), 28, badly with a counter right hand, which was ruled a knockdown after Wagner fell hard into the ropes. The bout was waved off moments later, when Martinez landed another monster right hand and a straight left down the middle. Wagner’s corner actually threw in the towel at the same moment the fight was called by the referee.

Fighting out of Milwaukee, Martinez’s win was his third in nine months.

Rosario stops Villanueva in Round 2

Omar Rosario picked up the first knockout of his professional career, as he put Uriel Villanueva down with a left hook to the body at 2:38 of the second round of a scheduled four-round junior welterweight battle.

Rosario, (3-0, 1 KO), who is from Puerto Rico, donned the late Roberto Clemente’s No. 21 on his trunks. He landed a crisp right hand to the head of Villanueva in the first round that might have been the best shot of the frame, but the bigger story was his consistent work to the body. That work paid off in the second round, when he forced Villanueva (1-1) to take a knee twice before the fight was called.

Firefighters dispute with city over sick days from vaccine side effects