Time and time again, overlooking Derrick Lewis is a mistake 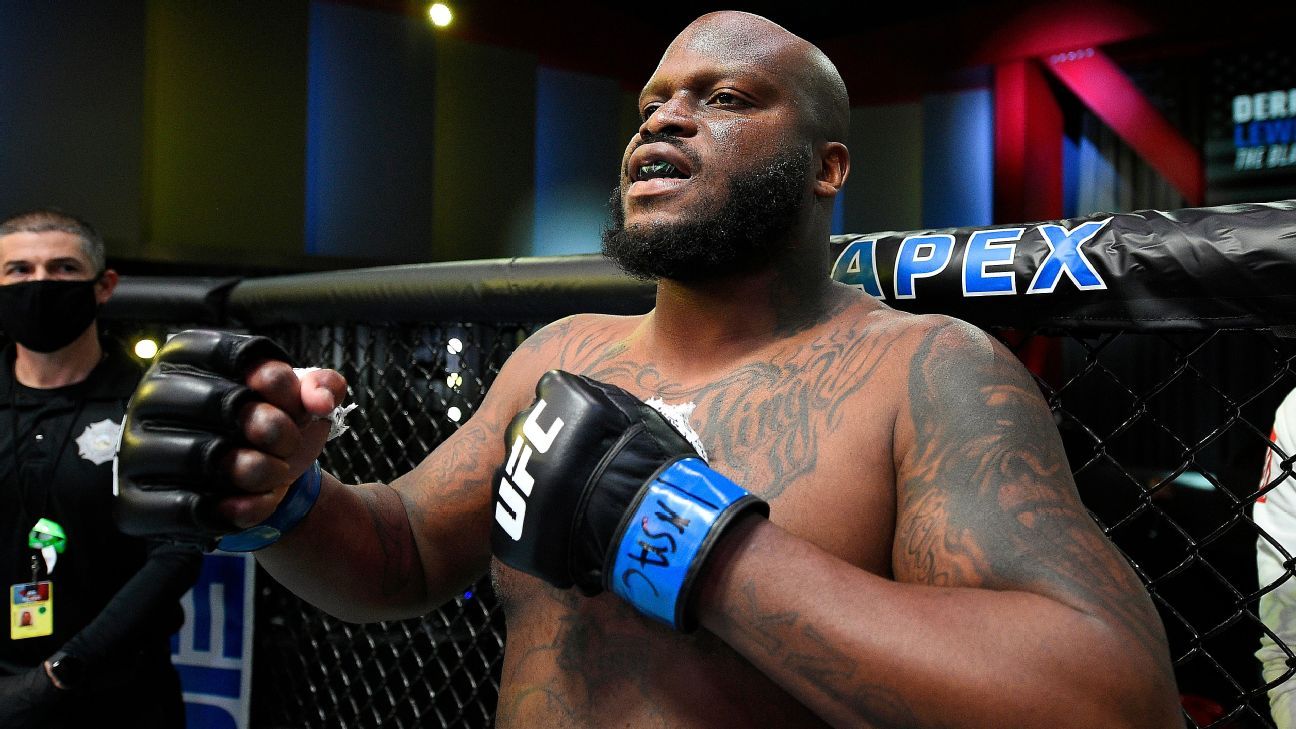 One of the big storylines heading into Saturday night’s main event was what should Curtis Blaydes do if he beats Derrick Lewis?

Ordinarily, a victory like that — which would have been his fifth in a row — over a quality opponent like Lewis, would lead to a title shot. However, with Jon Jones moving up to heavyweight it was clear Blaydes would either have to wait a while or remain active since the title shot wouldn’t be coming his way any time soon.

Well, so much for all of that.

Regardless, most of us, including the oddsmakers in Las Vegas, did Lewis a disservice in the buildup to this fight. According to ESPN Stats & Info, Lewis (+350) pulled off the biggest upset in a UFC main event since Michael Bisping (+400) beat Luke Rockhold at UFC 199. That doesn’t seem right, but it speaks to how much “The Black Beast” was being overlooked going into Saturday night.

This one had to feel good because he doesn’t like Blaydes and he was annoyed their fight got canceled a day before they were set to tangle in November when Blaydes tested positive for COVID. In addition, Lewis had a hellacious time getting to Las Vegas due to all the devastating weather issues in his hometown of Houston this past week.

Lewis ended up unleashing as vicious an uppercut you’ll ever see, and he handed out a few extra shots to an unconscious Blaydes afterwards (one or two too many, if you ask me). Then, just to make sure his message was sent loud and clear, he hit a few WWE-style crotch chops while Blaydes was still out on the ground. If that’s not adding insult to injury, I don’t know what is.

It wasn’t that long ago (March 2019) that Lewis dropped his second in a row and seemed a bit lost about where to go from there. Since then, he got into shape, addressed nagging injuries and is fighting as well as ever.

It’s been an unexpected career for Lewis — a former convict, turned truck driver, turned part-time fighter, turned UFC contender. Saturday marked his 21st UFC fight, which is amazing considering, as play-by-play man Brendan Fitzgerald noted on the broadcast, his original goal was to just make it to three fights inside the Octagon.

Though, despite this run he’s on, and much like Blaydes before the fight, Lewis is well aware it won’t lead to a title shot next. There is just no way the UFC is going to pass up booking Jones vs. the winner of Stipe Miocic vs. Ngannou, and rightfully so. That’s a massive fight and one that should be made as soon as possible.

So, who could be next on Lewis’ hit list? There are only two options:

1. A rematch against Alexander Volkov. Remember, when they fought at UFC 229, Volkov was seconds away from winning a decision before getting knocked out by Lewis. This was the infamous “my balls was hot” fight. Good fun.

2. The winner of next weekend’s Jairzinho Rozenstruik vs. Ciryl Gane fight.

I don’t think you can go wrong with either option. Both are intriguing — Volkov because he looked so good earlier this month against Alistair Overeem, and next weekend’s winner because it would be a fresh challenge for Lewis.

After the win, Lewis said he wanted Overeem next. This is a fight Lewis has wanted for a while. I’m sure Overeem would be down, too, but I don’t like that fight for Overeem next considering the beating he just took against Volkov. Lewis hits really hard, after all.

As for Blaydes, this is devastating because he was on the cusp of a big fight with just one fight left on his UFC deal. Had he won this one and his next one, he’d have been staring at securing a big contract before fighting for the belt. Now, he’s staring at one final fight left on a contract after getting knocked out and, as he told me earlier this week, a nonexistent, somewhat frosty relationship with UFC president Dana White. He’s in a tough spot.

Maybe a fight against next weekend’s main event loser makes sense, but that should be in a while. Blaydes needs to rest after a knockout like that.

Speaking of contracts, Lewis is now entering the final fight on his deal, too, with a ton of momentum on his side. Earlier this week, he talked about needing a big win going into that final fight so he could cash in. That news item barely made a ripple in the MMA news cycle because we were all focused on Blaydes’ situation.

Amanda Nunes will defend her UFC featherweight championship in two weeks. She also owns the bantamweight belt, and she has not put that title on the line since 2019. In the time since, a line of 135-pound contenders has formed. On Saturday night, Yana Kunitskaya stepped forward in the queue.

All fights from UFC Fight Night: Blaydes vs. Lewis will be available to watch on ESPN+.

It was just a baby step, as the No. 9 women’s bantamweight in the ESPN rankings barely eked out a win against seventh-ranked Ketlen Vieira. But while Kunitskaya posted among the evening’s least dominant victories, she showed off an added dimension in her game that will give other 135-pounders something to think about.

Kunitskaya, whose background is in taekwondo and muay Thai, has always been at her best in a standup fight. But Vieira, a Brazilian jiu-jitsu black belt, would have none of that. She took the fight to the canvas early and kept it there for nearly all of the first round. But try as she might, Vieira was unable to set up a submission.

Then the fight went right back to the mat at the start of Round 2, but this time Kunitskaya ended up on top. The 31-year-old Russian stayed there for most of the round, and delivered far more damage than Vieira had. By the time the fight was in its final round, Vieira seemed to recognize that she needed to get on top, which she did — until Kunitskaya reversed position in the final 30 seconds, enough time to do the bloody damage that won her the fight.

Kunitskaya piled up a 47-7 advantage in significant strikes, 215-35 in overall strikes, which is impressive. More impressive: She landed most of those shots while fighting on the canvas. By doing that to one of the division’s best grapplers — if not the best — Kunitskaya sent a message to all those ranked above her.

Marc Raimondi: Aspinall is the most ready heavyweight prospect on the roster

Tom Aspinall had two first-round finishes against modest competition in his first two UFC fights. The UFC doesn’t really do showcase bouts, but Aspinall made Jake Collier and Alan Baudot look like what the sport of boxing calls “opponents” — guys the contenders are supposed to beat. Andrei Arlovski, though, is no showcase fight. He might not be elite anymore, but the former UFC champion is a sturdy gatekeeper, prepared to stop prospects from vaulting themselves into the upper echelon of the heavyweight division.

Aspinall showed Saturday that he’s no middling prospect. He’s legitimate — the most polished heavyweight up-and-comer on the UFC roster, in fact. No disrespect to Chris Daukaus, who stopped Aleksei Oleinik with punches on Saturday. Daukaus is 31 years old; Aspinall is just 27, a relative baby in the heavyweight division, where the top contenders skew older. Aspinall’s quick hands found Arlovski’s chin in the first round. Then, after a boxing flurry, Aspinall took Arlovski down and choked him out. Arlovski had been submitted only once before in his career, by Josh Barnett, who is one of the best heavyweight submission artists of all time.

The UFC really seems to have something here in Aspinall, and it could be a boon for the promotion in the United Kingdom. Imagine Aspinall in a big fight on a card headlined by his teammate Darren Till in their hometown of Liverpool? That would be massive. And after this win over Arlovski, it’s likely only big fights ahead for the Scouser.

Officer gets toilet paper for senior during storm