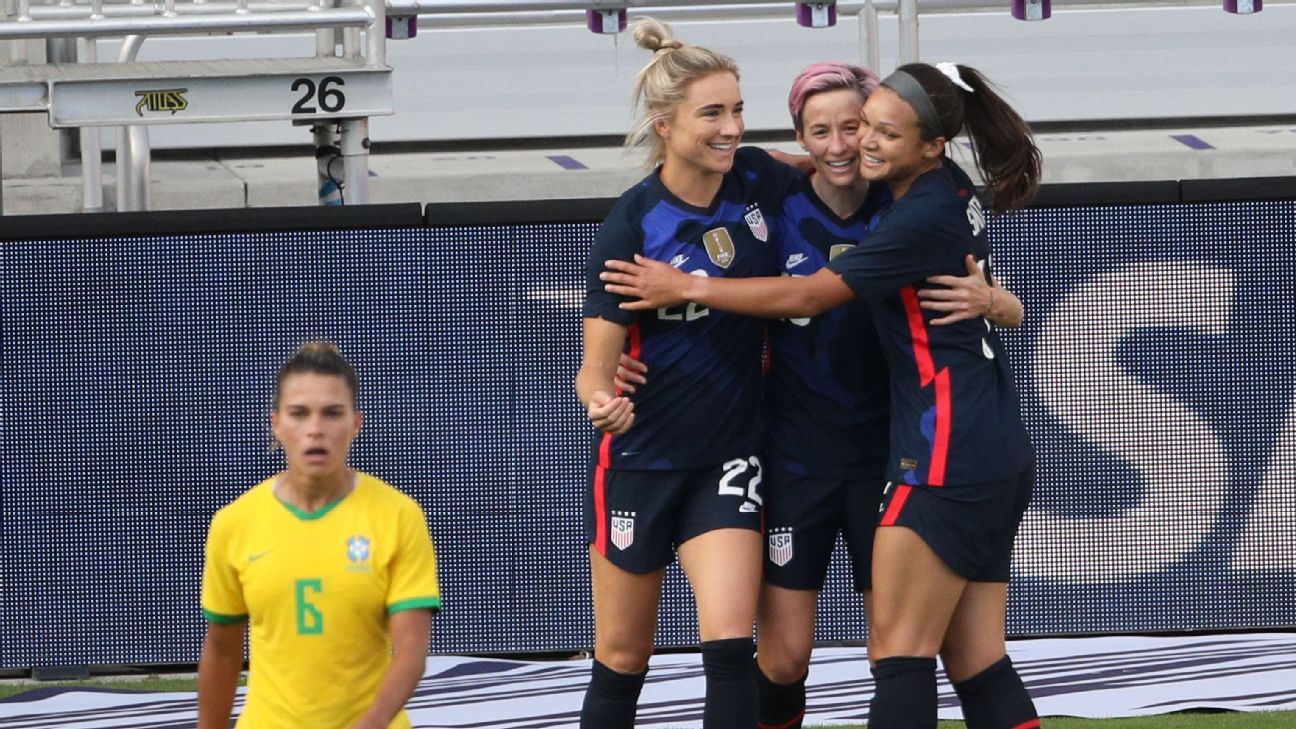 
Watching the United States women’s national team is an exercise akin to finding flaws in the Sistine Chapel. On most days, there is nary an imperfection to be found. But on the rare occasions when a defect is located in the Americans’ play, there’s a discussion to be had about whether it’s simple nitpicking or whether alarm bells should actually be going off.

So what to make then of Sunday’s 2-0 win over Brazil, one that all but clinches the SheBelieves Cup?

In many respects, the U.S. did what it normally does. It carried most of the play, and eventually broke through with goals by Christen Press and substitute Megan Rapinoe. The defense bent, but held firm. The result was less about perfection and more about efficiency, especially in both penalty areas.

The triumph was the 15th consecutive victory under manager Vlatko Andonovski, who took over from Jill Ellis following the U.S. team’s second consecutive World Cup triumph in 2019. And it can’t be overlooked that the U.S. prevailed against a Brazil side that is currently ranked eighth in FIFA’s latest round of rankings.

Looking beyond that metric, Brazil certainly has enough talent to threaten the U.S. There is longtime attacking lynchpin Marta, even as she plays in a wider role for manager Pia Sundhage. Forwards Debinha and Ludmila are skillful enough and mobile enough to threaten any team in the world, and did so on this day. Add in the fact that many of the U.S. players are still in preseason mode, and there’s every reason to think that the Americans’ are in solid shape as this summer’s Olympic Games come more into focus.

– Dunn explains why USWNT stood for national anthem
– Foudy: What the USWNT needs to do to stay on top

“It’s funny because I think every time I’m on this team, wearing this jersey, I feel like everyone expects us to never have a shot on goal against us, or no team to ever create a chance,” said defender Crystal Dunn. “And I can sit here and say I think we played a great game. I think Brazil is a talented group of players.”

But part of the reason why the U.S. women have been dominant for so long is precisely because the team is held to high standards, even if at times the expectations border on the ridiculous. And there were enough flaws in Sunday’s match to think that there are some issues to keep an eye on as the departure for Tokyo gets closer.

The U.S. delivered a more fluid performance against Brazil than it did in the tournament opener against Canada. That was due in part because Brazil was more adventurous in attack, leading to a more wide-open affair.

But in both matches, the U.S. conceded some wide open chances in transition that weren’t converted. In some situations, the U.S. helped itself with some astute covering tackles, like when Dunn slid over in the 13th minute to block Ludmila’s shot, or when Julie Ertz’s recovery run just before halftime spoiled a Brazil counter. Goalkeeper Alyssa Naeher contributed as well with a first half save from Ludmila.

But on other occasions, it was poor finishing by opponents that kept the U.S. net from being breached. Debinha will still be thinking about the opportunity she squandered in the 82nd minute. That is something the U.S. can’t continue to rely on going forward.

The play of right back Emily Sonnet was a concern as well, as she came out second best in a number of duels, though Andonovski defended the player given she was up against Marta for much of the day.

“A couple of times that I thought she could have done a better job,” he said. “But overall she’s playing against one of the best players in the world right now, and she was able to step in front, deny some of those passes going to her. She was able to get the ball a few times so overall good performance.”

To Andonovski’s credit, the transition opportunities that were apparent in the first half were largely kept in check after halftime thanks to a few tactical tweaks. This included dropping Ertz a bit deeper to limit space for Debinha and Ludmila, as well as provide additional cover for center backs Abby Dahlkemper and Becky Sauerbrunn. The U.S. also did a better job of getting pressure on the ball in midfield and slowing down Brazil’s attempts to play in transition.

“We know that if we give them a lot of space as a unit that they’re going to expose it, and I thought in the first half, we didn’t do a good enough job in closing the space” said Andonovski. “After we adjusted the structure a little bit, I thought we did an incredible job in the defending their transition.”

It’s worth mentioning however that in the prior game against Canada some transition opportunities were also conceded. It’s certainly no time to panic in terms of the U.S. defense, but there is reason to be wary of how teams look to exploit weaknesses.

There seems to be a bit more patience attached to the team’s attack, with Lindsay Horan’s two assists the highlight, along with Rapinoe’s “Rock the Baby” celebration, an ode to teammates Ali Krieger and Ashlyn Harris adopting a baby last week. Horan’s performance was a reminder that the Andonovski has options behind the injured Sam Mewis. Press showed her quality as well with a well taken goal.

The return of Alex Morgan was also plus, given that it was her first national team start since giving birth last year. She put in an active shift over 71 minutes.

All of that said, the U.S. team needed to be tested in this tournament, and it has been, which for Andonovski was the point of these matches all along.

“We want to play the best competition possible,” he said. “We want to play against different types of opponents, opponents that will present different challenges, for a reason. So we can go back in a room now, back in the office, and study, why is it that they were able to get 10 shots on goal? What is it that we could have done different? And we hopefully we can get better from it.”

As for perfection, the U.S. is hoping that happens later this summer.