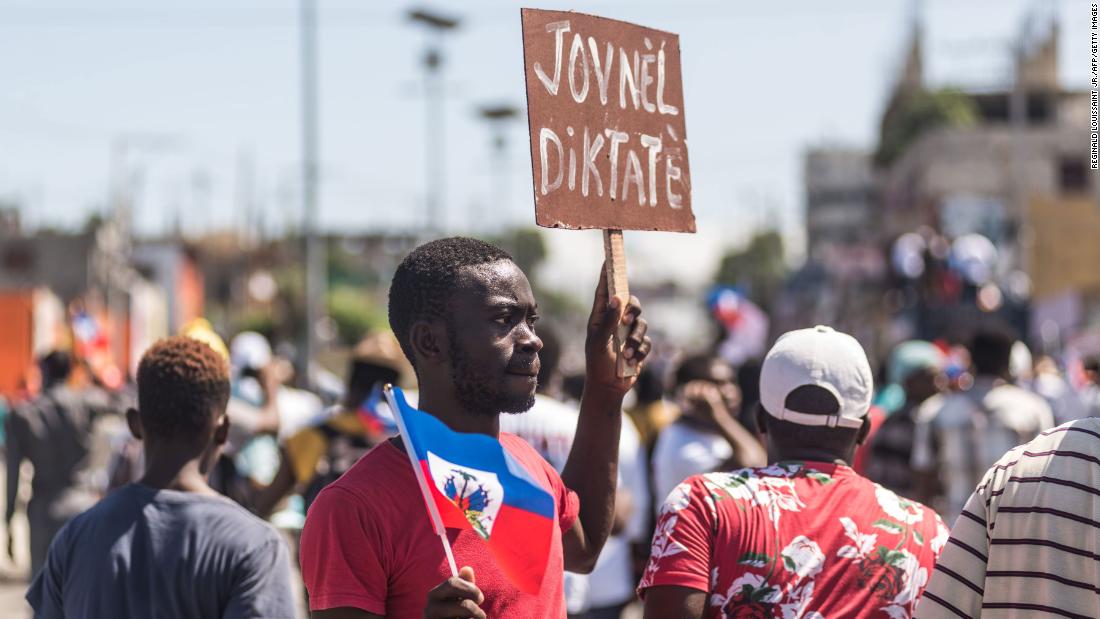 “Those of us fighting, who want another Haiti, a Haiti pearl of the Antilles, say no to the dictatorship,” one protester told Reuters in capital city Port-au-Prince, where Haitian opposition and civil society groups had called the demonstration. Another criticized the United States and international organizations for supporting the President.

At the heart of protests is a dispute over the President’s term limit: Moise has served only four years of the usual five, and says his term ends in 2022 — a stance backed by the United States, United Nations and Organization of American States.

Protesters, however, say he should have stepped down February 7, citing a constitutional provision that starts the clock once a president is elected, rather than when he takes office.

“We want the international community (to) understand that the Haiti people won’t back down on their demands. Jovenel Moise must leave the national palace for a peaceful transition that can lead us to the elections,” opposition leader André Michel told CNN on Sunday.

Moise has dismissed protesters as “a minority of people” seeking to destabilize the state and seize power, and has refused to contemplate calls for a transitional government, instead asking the opposition to wait until general elections later this year.

Earlier this month, the President also ordered three Supreme Court justices to retire, accusing them of designs on his office — a move that legal experts have told CNN is unconstitutional. In protest, Haiti’s judiciary stopped work, putting courts and tribunals across the country on pause.

Haiti’s national bar association and the Superior Council of Judicial Power (CSPJ) — a powerful body that appoints, fires and disciplines judges — have sided with the opposition in calling for Moise to step down. So have some US lawmakers.

However, the international community and the administration of US President Joe Biden have largely voiced support for Moise to remain in office until 2022, though his recent handling of the protests and Supreme Court is sparking some concern.

“I am alarmed by recent authoritarian and undemocratic acts — from unilateral removals and appointments of Supreme Court judges to attacks against journalists,” tweeted Julie Chung, Acting Assistant Secretary for the US State Department’s Bureau of Western Hemisphere Affairs on February 16.
She urged Haiti to hold legislative elections “as soon as possible.“
This month’s protests also reflect years of increasing bitterness in Haiti over the country’s economic pain and violent crime. Killings and a wave of hundreds of kidnappings in particular have driven public outrage, according to a recent United Nations report, which recorded a monthly average of 84 demonstrations in the second half of 2020.

Moise has blamed his administration’s poor record in dealing with such fundamental issues on the country’s system of governance, and on complications and lack of clarity in the constitution itself. “Since the beginning of my term, the country has never known stability,” he acknowledged in a February 12 tweet.

With an eye toward empowering the office of the president for the future, he has vowed to hold a referendum on changes to the constitution in April. This will be his legacy project, Haiti’s ambassador to the United States, Bocchit Edmond, told CNN.

However, critics are skeptical of the legitimacy of any constitutional changes made in the current political climate and without institutional checks and balances in place. General elections are expected to follow in the fall.

In a speech last Sunday, amid celebrations for Carnival, which he celebrated with large crowds of supporters and revelers, Moise expressed his determination to see the country through another year.

“Haiti is for me, for my kids, for the people here dancing. The people who don’t want me to do the people’s work will stop, or I will make them stop. I was elected to do a job, and I will do it,” he said.