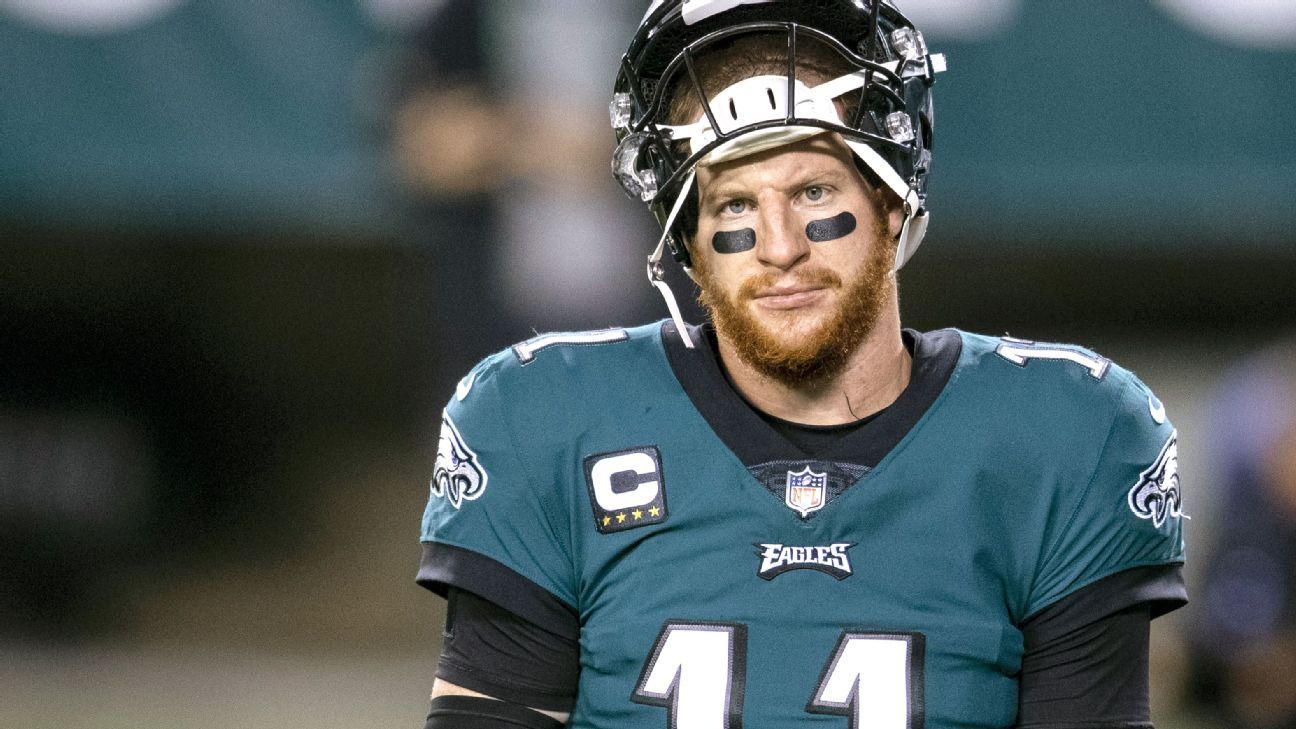 After the Tampa Bay Buccaneers just cashed as 60-1 Super Bowl long shots, bettors would love to beat the market on a quarterback changing teams this offseason. However, it isn’t that simple. For example, after landing Carson Wentz in a trade with Philadelphia, the Indianapolis Colts saw their title odds shift only slightly, from 25-1 to 20-1. That’s because oddsmakers were well aware of the speculation that Wentz could reunite with his former offensive coordinator, current Colts head coach Frank Reich. So be careful assuming that oddsmakers think Wentz is only a slight upgrade from Jacoby Brissett; bookmakers knew the Colts were going to land a QB.

Moving forward, while we expect more quarterback movement in the coming weeks, finding that golden ticket is still possible. You just have to read the tea leaves. The fact that some bettors speculated at this time last year that the Bucs could land an all-timer like Tom Brady is that much more impressive.

Here’s what we are keeping our eye on this week:

Field prop: Every sports season takes on its own identity, and this college basketball year has been dominated by two programs: Baylor and Gonzaga. They’re the nation’s lone remaining unbeatens, and many assume one will eventually cut down the nets. Caesars William Hill is now allowing bettors to wager on that very concept. In a proposition bet posted this week, bettors can wager on either the Bears or Bulldogs winning it all (+105), or you can take the field (-125). – Doug Kezirian

Trending up: Betting trends are mostly fun facts, but it’s hard to ignore some. For example, the Brooklyn Nets have hit the over in 21 of their last 25 games. Conventional thought would suggest it’s obvious the over is more likely for the Nets, given their scoring prowess and defensive limitations. But oddsmakers are aware of those concepts and incorporate all that into the line, which is why Nets totals are typically the highest any night they play (235 on Sunday night). That’s what makes this recent run that much more wild.

Additionally, the New Orleans Pelicans 21-3-1 to the over in their last 24 games. This stems from having a team that ranks seventh in offensive efficiency and third-worst in defensive efficiency. Again, oddsmakers know this, but somehow the over has still been cashing. – Doug Kezirian

Trending Down: The Cleveland Cavaliers have failed to cover the spread in 13 consecutive games, tying them for the longest such streak in the last 32 seasons, according to ESPN Stats and Information. The 2000-01 Cavaliers also had a streak of 13 straight losses against the spread. – David Purdum

Timing is everything: Seemingly more than any other sport, the NBA offers lucrative in-game wagering opportunities that actually pay off. Just in the past week, the Nets rallied from a 22-point deficit in the third quarter against the Suns, cashing 20-1 money-line wagers. One bettor turned $200 into $4200. The very next night, the Golden State Warriors trailed the Miami Heat by 15 points in the fourth quarter, only to win in overtime. The Dubs were 16-1 on the in-game money line. A William Hill bettor in Indiana won over $2K, hitting the Warriors at 9-1. And on Sunday, the Pelicans got as high as 25-1 down 24 to the Celtics, with one bettor cashing at 14-1 in New Jersey. – Doug Kezirian

Tax burden: Despite forcing bettors to lay more lumber than they should, the Utah Jazz just kept covering. Before falling to the Los Angeles Clippers on Friday night, the Jazz posted a 19-1-1 record against the spread (ATS) in a 21-game stretch (20 outright wins). It’s just mind-boggling. All oddsmakers could do to offset the expected avalanche of Utah money is tax the Jazz a bit higher on the point spread. But score one for the oddsmakers, as the Jazz did close as two-point underdogs to the Clips, despite that ridiculous run. – Doug Kezirian

Merlin Magic: News often trickles out about tickets of large amounts or huge long shot odds, but rarely do we see the combination of big money on the long shot. Last week, BetMGM reported a $10,000 wager on the Washington Wizards to win the NBA championship at 500-1 odds. The ticket nets $5 million. The Wizards sit at 10-17, but they have won four straight games and currently reside just 3 games back of a playoff spot.

My sources tell me this particular bettor often beats the closing number and is fairly respected, but he is also allowed to wager large amounts. Either way, the pick is a head-scratcher. Then again, imminent Hall of Famer Kevin Garnett once implored us that anything is possible, and I imagine that’s even more so the case with a season full of pandemic-related unknowns. – Doug Kezirian

No joke: A bettor in Australia cashed in big on Novak Djokovic’s victory at the Australian Open. The unidentified bettor placed a $115,000 bet on Djokovic at +125 on Feb. 3 with Australian sportsbook TAB. It was the largest since bet on the tournament with TAB, the book reported. Djokovic defeated Daniil Medvedev in straight sets for his ninth Australian Open title. – David Purdum

Guessing game: Major League Baseball is reportedly deadening the ball this season in response to recent surges in home runs, and oddsmakers are trying to figure out just how much it will impact scoring.

“My honest answer is I have no idea,” Randy Blum, baseball oddsmaker for the SuperBook at Westgate Las Vegas, said. “Behind closed doors, who knows what they’re really doing to the baseball, if anything?”

“It’s kind of similar to last year, when people were asking about how the N.L. having the DH would impact totals,” Blum added. “When you’re talking about totals, it’s the same answer we gave last year – it’s really about the pitching.” – David Purdum

Catching the dog: According to Caesars Sportsbook by William Hill, there were two 5-figures bets on Derrick Lewis at more than 3-1 in his upset of Curtis Blaydes during UFC Fight Night.

MLB win total movement: The three teams that saw the most early movement after William Hill U.S. sportsbooks posted them last week were:

Here's what we know about England's reopening plans