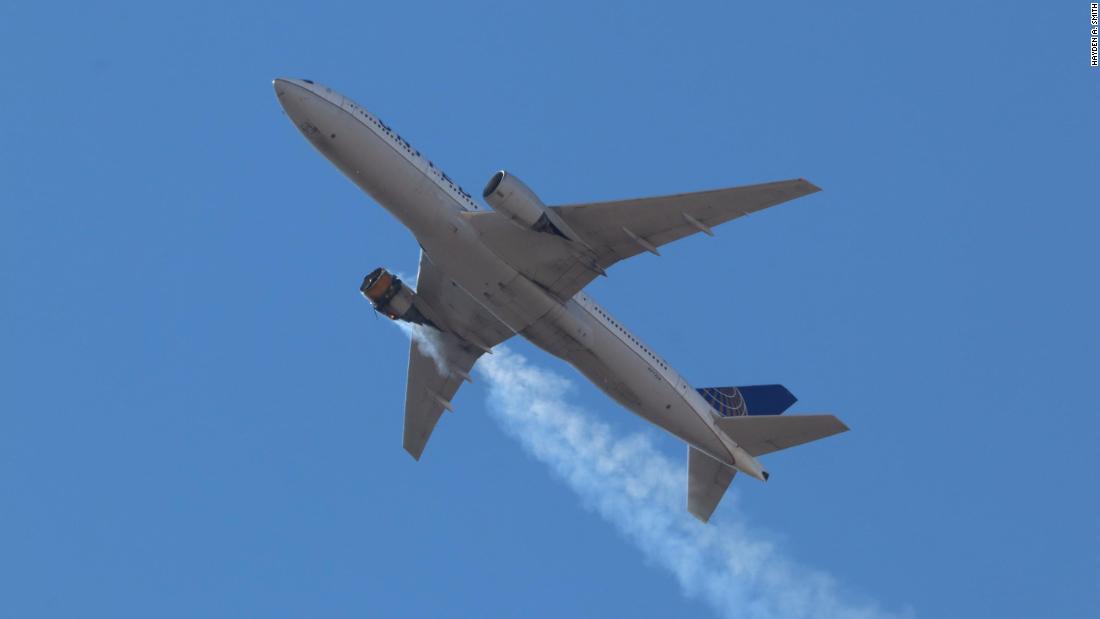 Boeing (BA) on Sunday recommended that airlines stop flying versions of the aircraft that are equipped with Pratt & Whitney 4000-112 engines while US authorities investigate the Denver incident.

The plane manufacturer said that 69 of the 777 jets that are in service are powered by the engine, while 59 such aircraft are in storage.

United Airlines (UAL), Korean Air, Asiana Airlines, All Nippon Airways and Japan Airlines (JAPSY) all use Boeing 777s that feature Pratt & Whitney 4000 engines.
The groundings come after an engine attached to a United-operated 777 plane failed Saturday, just minutes after the Honolulu-bound flight took off from Denver International Airport. As United Flight 328 returned to the airport, it dropped more engine debris through the roofs of homes and into yards.

An initial examination of the Pratt & Whitney PW4077 engine from that flight showed that two fan blades were fractured, according to the US National Transportation Safety Board (NTSB). The agency said that the remaining blades exhibited damage “to the tips and leading edges.”

The findings are preliminary, but they were still enough to spur some airlines to pull planes that use those types of engines from service. The NTSB said that it will examine the engine, airline and photos and videos taken by passengers on board the flight, along with the flight data and cockpit voice recorders.

Investigators believe a fan blade in the engine came off and took out another blade, a source familiar with the situation told CNN.

United said Sunday that it would immediately pull 24 planes from flying “out of an abundance of caution.” The company said its move was voluntary and temporary and should disrupt only “a small number of customers.”

South Korea’s Asiana Airlines, which owns nine of the planes, said it would stop using them, too.

The jets are also used by Korean Air. That airline said Monday that it would hold off on making any decision until the country’s transport ministry issued guidance.

According to the most recent registry data, the only airlines that operate with the affected engines are in the United States, Japan and South Korea. United is the only US operator with this type of engine in its fleet.

Both Boeing and Pratt & Whitney have said they are cooperating with the US investigation into the Denver incident.

“We are pleased to hear that United Airlines flight 328 returned safely to Denver,” Boeing said in a statement. “Boeing technical advisers are supporting the US National Transportation Safety Board with its investigation.”

Pratt & Whitney — a subsidiary of Raytheon Technologies (RTN) — said it has sent a team to work with investigators looking into the engine failure.

“Pratt & Whitney is actively coordinating with operators and regulators to support the revised inspection interval” of the 4000 engines that power certain 777s,” the company said, adding that “any further investigative updates regarding this event will be at the discretion of the NTSB.”

The US Federal Aviation Administration on Sunday also issued an emergency order saying it would be stepping up inspections of 777s that use certain Pratt & Whitney 4000 engines.

“We reviewed all available safety data following [the] incident,” FAA Administrator Steve Dickson said. “Based on the initial information, we concluded that the inspection interval should be stepped up for the hollow fan blades that are unique to this model of engine, used solely on Boeing 777 airplanes.”

The NHL’s best and worst this week

Here's what we know about England's reopening plans