Myanmar: Huge demonstrations despite military’s warning that protesters could ‘suffer loss of life’ 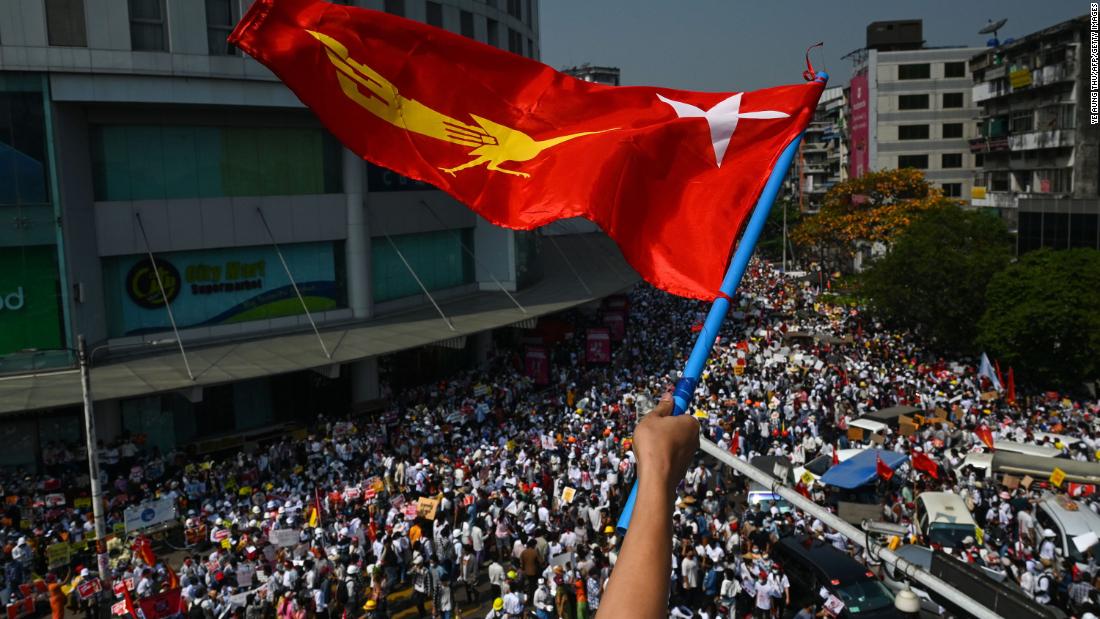 Images from photographers in the country and on social media Monday showed tens of thousands of people packing the streets in Yangon, Mandalay, and Naypyidaw, as well as in towns and cities across the country, including in southeastern Dawei, in Shan state’s Taunggyi, in Ayeyarwady’s Pathein, Kachin state’s Myitkyina, and in one of the country’s poorest regions, Chin state.

In an ominous statement Sunday evening, the military junta said it could use lethal force against protesters.

“It is found that protesters have raised their incitement towards riot and anarchy mob on the day of 22 February. Protesters are now inciting the people, especially emotional teenagers and youths, to a confrontation path where they will suffer the loss of life,” the State Administration Council — the name for the military junta now controlling the country — declared Sunday evening on state broadcaster MRTV.

Video from social media Sunday night and Monday morning showed barbed wire blocking roads to some foreign embassies in the largest city, Yangon, the focus point for many recent protests. Footage also showed what appeared to be police and military vehicles rolling through the streets.

Protesters called for all offices and shops to be closed on Monday, with activists urging all citizens to join the protest, known as the “Five Twos” — or the 22222 strike — in reference to Monday’s date.

“22.2.2021 will be a big historic day. Keep watching us and pray for us, friends,” leading protest activist group, the Civil Disobedience Movement said in a tweet Sunday.

For more than two weeks, thousands of people in villages, towns and cities across Myanmar have come out to peacefully protest or take part in a non-violent civil disobedience movement against the military takeover, demanding that the generals hand back power and calling for the release of civilian leader Aung San Suu Kyi and other democratically-elected officials.
The junta has attempted to stop protests by imposing bans on gatherings of more than five people and curfews in certain areas and cutting the internet at night. They have also deployed troops to major cities, including members of elite counter-insurgency divisions documented to be engaged in human rights abuses and violent campaigns against ethnic minorities.

The Assistance Association for Political Prisoners Burma (AAPPB) said at least 640 people have been detained in relation to the coup.

But that has not stopped the protesters, who gathered in large numbers following the fatal shootings in Mandalay.

In the capital, Naypyidaw, Sunday large crowds gathered to attend the funeral of a young woman, who died on Friday after being shot in the head during an anti-coup protest. Mya Thweh Thweh Khine, who was shot just before her 20th birthday, was the first known casualty of pro-democracy protests.

Video of her funeral procession showed a hearse with her picture in front and a convoy of vehicles driving out of a hospital. As the procession drove through the streets, people on motorbikes and bystanders were seen raising the three-finger salute from the Hunger Games movies, which has been adopted by protesters.

Myanmar’s Foreign Ministry said in a statement Sunday that authorities were “exercising utmost restraint through minimum use of force” when dealing with the protests. It also said that statements and remarks made by some foreign countries are “tantamount to flagrant interference in internal affairs of Myanmar.”

In a Facebook post, the ministry called on diplomats to “respect the laws and regulations of the receiving state” and reiterated that a “free and fair general election” will take place. A state of emergency is in effect in Myanmar for one year but the junta have not given a timeframe by which it will hold elections.

Several countries have condemned the military takeover and violence against protesters.

The European Union’s foreign affairs chief Josep Borrell said Monday that the bloc would introduce sanctions against military officials responsible for the coup.

“Today we have decided the set of targeted measures with ministers in response to these events,” Borrell said. “Then we took the political agreement to apply sanctions targeting the military responsible for the coup and their economic interests.”

The United States, United Kingdom and Canada have previously imposed punitive measures on certain generals, with the US announcing further sanctions Monday against two officials over Myanmar “security forces’ killing of peaceful protestors.”

Singapore, the biggest foreign investor in Myanmar last year, warned Saturday that there will be “serious adverse consequences” for the country if the situation there continues to escalate.

In Mandalay on Sunday, stringers for CNN confirmed that live rounds and tear gas were used to disperse people at an anti-coup protest in the city. Volunteer emergency workers cited by Reuters and AFP news agencies said that at least two people died when police opened fire on protesters. The news agencies reported that between 20 and 30 people were injured in the crackdown.

In video seen by CNN, a large crowd of people could be seen running from police and taking cover behind whatever shelter they could find. In another video, a person could be seen being stretchered away by medics. The condition of the patient was not immediately clear.

The military junta defended the actions of security forces in the state broadcast Sunday, saying they used “prescribed crowd dispersal methods” and blamed “some notorious ex-criminals and their gangs” who “used sticks, knives, stones, catapults, and other weapon-like materials to attack the security force members.”

UN Special Rapporteur for human rights in Myanmar, Tom Andrews, said in a tweet that he was “horrified at more loss of life” as the military “escalates its brutality in Myanmar.”

“From water cannons to rubber bullets to tear gas and now hardened troops firing point blank at peaceful protesters. This madness must end, now!” he said.

Following the shooting, Facebook deleted a page run by the Myanmar military, the company said.

“In line with our global policies, we’ve removed the Tatmadaw True News Information Team Page from Facebook for repeated violations of our Community Standards prohibiting incitement of violence and coordinating harm,” a Facebook spokesperson said in a statement.

'This guy needs a kidney, I've got two'