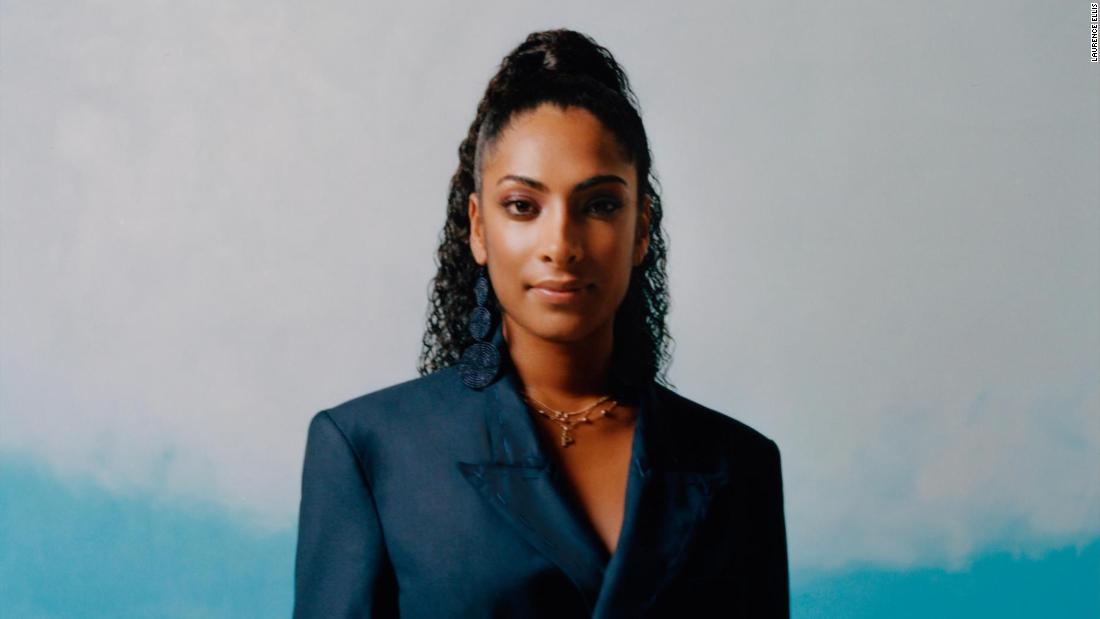 The annual prize, now in its fourth year, was presented by the Queen’s daughter-in-law Sophie, the Countess of Wessex, during a virtual event at London Fashion Week on Tuesday.

A statement issued by the British Fashion Council (BFC), the organization responsible for working with the royal household to select a winner, called the young designer a “progressive thinking leader and agent for change.”

Ahluwalia launched her namesake brand in 2018, having first attracted industry attention for her photobook “Sweet Lassi.” The book, released alongside a graduate collection for her masters degree in menswear, chronicled the designer’s eye-opening trips to Nigeria and India, where she witnessed the scale of the second-hand garment industry and the volume of waste clothing generated by consumers.

In an interview with CNN last year, the London-based designer, who is of both Indian and Nigerian heritage, said her interest in sustainable design was piqued during a trip to see family in Lagos. There, she noticed market traders wearing obscure items of clothing from overseas, such as a T-shirt from the 2012 London Marathon.

“I was intrigued and dug deeper, moving forward on a hunch that the presence of these textiles heralded a larger story,” she said.

Her research led her to the city of Panipat, north of Delhi, which serves as a huge hub for garment recycling and is often referred to as the “cast-off capital” of the world. “I was fascinated and also worried about how much we throw away,” Ahluwalia said. “Visiting Panipat was life-changing and I decided to start my brand with sustainable principles.”

“Sweet Lassi” paired images of people sitting among piles of old clothing in recycling facilities with studio shots of models wearing her own avant-garde styles.

Ahluwalia’s menswear uses vintage and deadstock fabrics, blending sportswear with more classically tailored silhouettes. Her innovative approach has seen her win several notable awards in recent years, including the H&M Design Prize in 2019. She was also one of eight brands to jointly win the prestigious LVMH Prize in 2020.

Photography continues to play an important role in Ahluwalia’s work, which melds conceptual design with narrative storytelling — often with a keen focus on materials and people. “I feel more like a multidisciplinary creative … I also like the idea of storytelling and creating a world for anyone who is interested,” she said.

During London Fashion Week last June, Ahluwalia published another book, “Jalebi,” which also drew on her own heritage. Working with photographer Laurence Ellis, she put West London’s Punjabi community front and center by documenting daily life in the diverse Southall neighborhood. According to Ahluwalia, whose mother is Punjabi, the resulting images were a tribute to multiculturalism in Britain.

“Brexit had just happened as well as the Windrush scandal and there was an increasingly hostile environment for ethnic minorities,” she explained. “I wanted to create a piece of work that celebrated the beauty in diversity.”

In Ahluwalia’s Autumn-Winter 2021 collection, her latest sustainably made designs, created with a palette of rich brown shades and deep jewel tones, were presented in the form of a short film directed by Stephen Isaac Wilson on Saturday. In “Traces,” a cast of models move in mesmerizing synchrony, conjuring up images of — in the designer’s words — “migration, brotherhood and unity,” as they perform choreography by Holly Blakey, set to a score composed by musician Cktrl.

The Queen Elizabeth II Award for British Design recognizes the fashion industry’s role in society and diplomacy. It honors young designers whose work makes a positive impact through sustainable practices or community engagement.

BFC chief executive Caroline Rush praised Ahluwalia’s efforts to give back to communities around London and abroad, calling her an “inspiration” to young British designers.

During the virtual presentation of the award on Tuesday, Ahluwalia described the win as “surreal,” adding “it’s lovely to be recognized for doing something you love.”

Richard Quinn won the inaugural award in 2018, with the Queen making a surprise appearance in the front row at his London Fashion Week show to present the award. Rosh Mahtani, founder of jewelry brand Alighieri, and fashion designer Bethany Williams are the prize’s other previous winners.

London Fashion Week runs Friday 19 to Tuesday 23 February, and is entirely digital this season due to the ongoing pandemic.

(Top image: A portrait of Priya Ahluwalia by Laurence Ellis)