Spain: More child migrants are arriving alone to the Canary Islands than ever before. This is what happens to them. 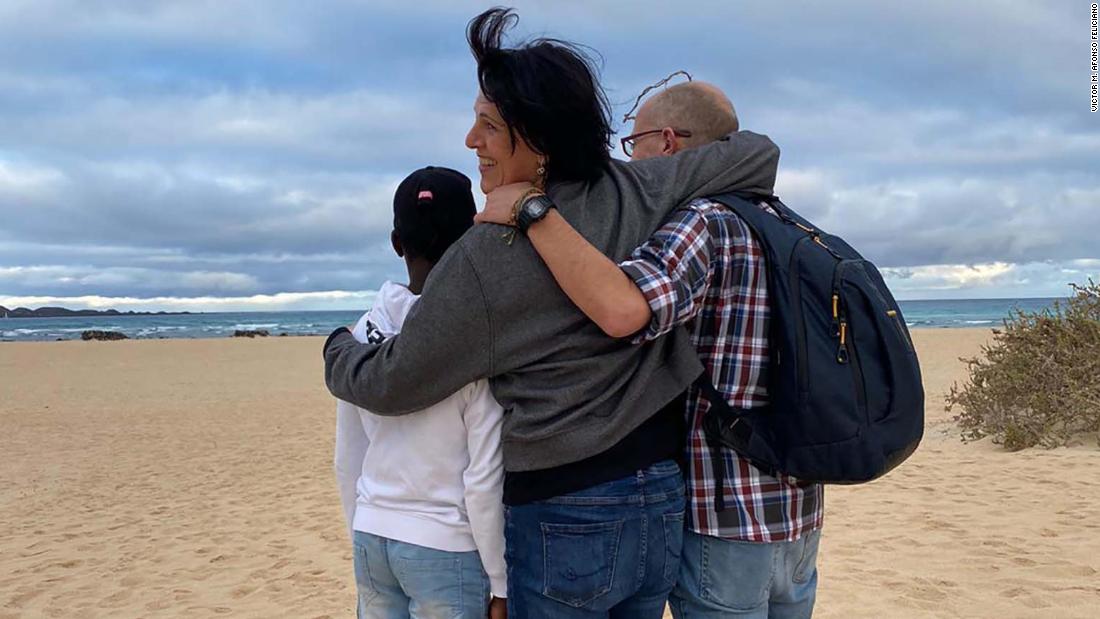 Abou, from West Africa’s Ivory Coast, boarded an inflatable dinghy alongside four other children, and a mother and her baby, all bound for the Canary Islands, in search of a better life. They arrived on the island of Fuerteventura in June 2020 after a full day’s journey from southern Morocco.

For years, migrants and refugees from sub-Saharan Africa have followed a well-worn path north, boarding traffickers’ boats in Libya, Morocco, Tunisia and Algeria to take them across the Mediterranean to Spain and Italy.

Spain’s Ministry of Foreign Affairs says around 23,000 migrants arrived in the Canary Islands from Africa in 2020 — more than seven times the number of arrivals in 2019. And almost 2,600 of them were, like Abou, unaccompanied minors — more than three times 2019’s numbers — Canary Islands’ government data shows.

That has left authorities there with a challenge: How to care for those who arrive safely.

Spain had for years resisted the far-right movements seen in many other European nations, but anti-migrant sentiment has been steadily growing in recent years, alongside the rise of the country’s ultranationalist Vox party.

On the Canary Islands, though, some families are taking part in a scheme run by the local government and SUMAS, a non-profit organization, by offering temporary foster care for migrant children like Abou.

He now lives on the island of Tenerife with a couple, Victor Afonso Feliciano, 50, and Adelaida Delgado Alonso, 52, the owners of an organic supermarket, who have no children of their own. Abou is the first child the couple have taken in.

“When the program first started, it was about taking in any young child, whether they were a migrant or Spanish,” Afonso Feliciano told CNN. “But we decided specifically from the beginning that our objective was taking in a young child that came from abroad. It was driven by our desire to help change the migrant crisis in our own little way.”

Delgado Alonso said: “They have come because of need. No one gets on a boat at 11 years old, like Abou has, because they are OK. They have taken the risk at sea because they don’t have a future. Abou was lucky he arrived on land because the vast majority don’t make it.”

The pandemic has complicated authorities’ handling of new arrivals, according to Gemma Martinez Soliño, the islands’ deputy minister for human rights.

“The migrant crisis quickly became not only a humanitarian problem but a health one too,” she said. “We had to come up with a system so that we could test all those who were arriving and create spaces where we would quarantine people with the virus.”

While Abou has found a family willing to give him a home, the islands have not been immune to the country’s anti-migration wave.

“Because of Covid, people are frustrated because there is no work,” Martinez Soliño said. “People perceive that there is a social crisis going on … and so sectors of the population are heeding more xenophobic attitudes which are heightened by fake news, the media and even some local authorities.”

A 2018 report by Impactur Canarias found that more than a third of the islands’ GDP and more than 40% of all jobs in the region depend on tourism. Covid-19 has seen the islands’ economy grind to a halt.
And recent data from Oxfam Intermón shows that poverty levels on the islands have grown due to the pandemic.

“It’s really difficult to fight against fear,” Martinez Soliño added. “Fear can be all encompassing. And it’s even more difficult in a population that has barely recovered from the crisis in 2008 and is starting to sense that another one is coming.”

Children between the ages of 6 and 12 — like Abou — are eligible for the local government’s fostering scheme. Those younger than 6 are eligible for adoption, but only when it is confirmed that they do not have any family members in the European Union (EU), or any documentation.

SUMAS tries to reunite migrant children with their biological families where possible — it has helped to put Abou in contact with his mother and father, who both live in Paris.

His parents made the journey to Europe via the Mediterranean, travelling from Libya to Italy and from there to France a year before Abou. They raised the money to pay for Abou’s boat journey from Morocco to the Canary Islands, in hopes of a brighter future.

“After the first two weeks of being here, he was able to speak to his parents by phone,” his foster carer Feliciano explained. “He is now able to maintain a relationship with them. He may be able to return to his family, but it does depend on his decision and the situation which they find themselves in.”

“The reality is that it is a painful process, because you get attached emotionally,” Feliciano said. “But this situation isn’t adoption, it is temporary. It’s help from a family that wants to give a child love, care and affection so they can begin living a normal life.”

But many children are too old to take part in the scheme — most minors who arrive are boys aged around 15 or 16.

One such boy is 15-year-old Omar (not his real name) from Senegal, who landed on the island of Tenerife last November. He and a group of migrants spent more than a week traveling aboard a fishing boat with little food or water.

“I felt awful on the journey,” he told CNN. “It was eight days by sea without sleeping or eating well. But now I am happy here. I have been in Spain for three months now and I don’t want to leave. I see myself building a life here, finding a job and having a family.”

Omar lives in a center for child migrants, run by the Canary Islands government. Its young residents are taught Spanish and other professional skills to help them integrate into society.

But the sharp increase in demand for places has squeezed the resources of the local government, forcing it to seek help from the private sector to open new centers.

“At the end of last year … we did not have enough places to house the children and provide them with the care they needed,” said Martinez Soliño. She said three new centers were opened in hotels that had been left empty because of the pandemic.

“But now we are receiving opposition from members of the public, and it is growing,” she said.

Adding to the challenges they face; some migrant children remain in limbo even after arriving safely on the islands.

Authorities in the Canary Islands use bone marrow tests to verify the ages of children whose dates of birth are unclear. But backlogs due to the pandemic mean around 500 young people are still waiting to have their ages confirmed, said Martinez, from the Canary Islands’ government.

Without proof of age, they cannot be placed with families — even if they are under 12 — or be given documents which allow those over 16 access to free training courses.

The Canary Islands government said it had received €10 million ($12m) from the Spanish government to help house and care for child migrants, but that the funding fell far short of its program’s needs.

Oussama El Baroudi, from the International Organization for Migration, said the situation on the islands was one of many examples which highlight the need for a long-term multilateral solution for the migrant crisis: “It will be important for both Spain and the EU to adopt a way of managing migrations that will guarantee that they can take place in an ordered and safe manner.”

In the meantime, Abou’s life has become a little more like a child’s should. He has recently started school and has joined a football team. Little by little, he is settling into a routine on the island.

Afonso Feliciano hopes that, with time, Abou, and other migrants like him, will be greeted with more understanding.

“People don’t think that, for instance, leaving here and moving to the States is immigration, or going to London to live is immigration, when the reality is that they are the same thing. It’s leaving everything behind to go to another place with the hope that your life will improve,” he said.

“If we could just put ourselves in the skin of someone else just a little, I am sure the world would be much better.”

arrivingCanaryChildEuropeIslandsmigrantsSpainSpain: More child migrants are arriving alone to the Canary Islands than ever before. This is what happens to them. - CNN
0
Share