Are the Utah Jazz a real threat to the Los Angeles Lakers and LA Clippers? 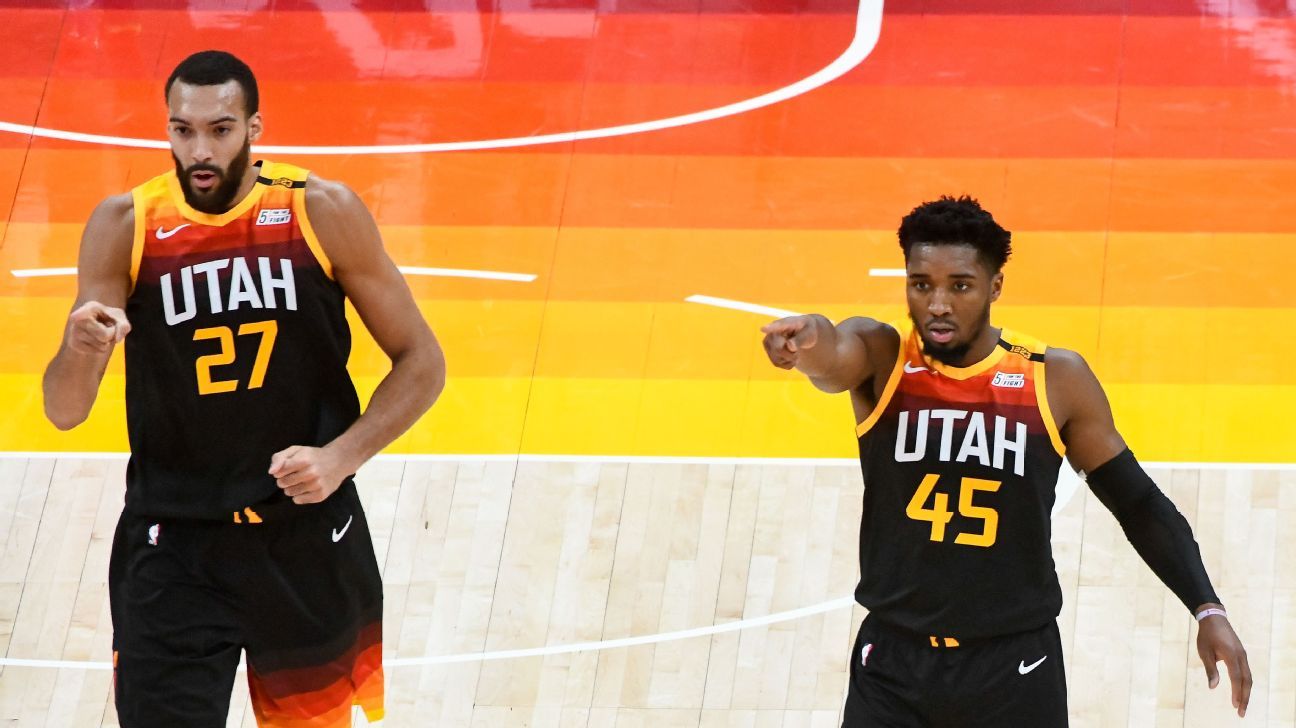 
ONE MONTH INTO the NBA season, Steve Kerr had seen enough to make a rather grand declaration about the Utah Jazz.

The Jazz had just dismissed Kerr’s Golden State Warriors, leading by 36 points after three quarters and cruising to a 127-108 victory on Jan. 23. It was Utah’s eighth straight win, and questions began percolating about whether the Jazz were actually good enough to be included in conversations about the league’s title contenders.

“They’re trying to win a championship right now, and I think they’re capable of doing so,” Kerr said. “They’re where we were three, four years ago.”

More than a month later, the Jazz are still rolling. They’ve won 21 of the past 23 games — 19 by double digits — entering Wednesday’s meeting with the defending champion Los Angeles Lakers (10 p.m. ET on ESPN). Utah has the NBA’s best record at 25-6 and is the lone team in the league to rank in the top five in both offensive and defensive efficiency.

But are the Jazz a real threat to beat one (or both) of the L.A. teams in the playoffs? Kerr’s answer was quite affirmative, if not representative of a consensus opinion around the league, and he wasn’t the only coach to compare the Jazz to a recent championship squad.

Brad Stevens, just before his Boston Celtics lost by 14 in Utah on Feb. 9, said the Jazz were the “closest team to the ’14 Spurs” that he has seen in regard to smarts and unselfishness manifesting in brilliant ball movement.

Those Spurs had three surefire Hall of Famers with extensive championship experience in Tim Duncan, Tony Parker and Manu Ginobili, not to mention a budding superstar in Kawhi Leonard. One of the primary reasons skepticism about the Jazz persists among rival scouts and executives is because they lack proven star power that the Lakers, LA Clippers and Eastern Conference favorite Brooklyn Nets feature.

Jazz guard Donovan Mitchell and center Rudy Gobert, who are harmonious and happy after ironing out chemistry issues prior to the bubble and signing lucrative, long-term contract extensions before training camp, unquestionably form one of the NBA’s best duos. Mitchell is a dynamic scorer and developing playmaker who has demonstrated he can rise to the occasion on the playoff stage, while Gobert is recognized as the NBA’s most dominant defensive presence and is a critical cog of the Utah offense as a screener, roller, finisher and rebounder.

But Utah’s star pairing isn’t perceived by league insiders to be on the same level as LeBron James and Anthony Davis, as Leonard and Paul George or as Kevin Durant, James Harden and Kyrie Irving. In the NBA, star power wins playoff series — with some exceptions.

“You kind of go back to the old Detroit team that won it,” a longtime Western Conference scout said, referring to the 2003-04 Pistons, whose lone All-Star that season was Ben Wallace, a defensively dominant big man and Detroit’s sixth-leading scorer. “They just had a lot of really good players.

“I thought Utah needed another star, but I’ve changed on that.”

IT ISN’T UNPRECEDENTED for the Gobert/Mitchell-era Jazz to dominate for significant stretches of the regular season. It happens on at least an annual basis.

Utah won 21 of 23 in a 2018 run that lasted from late January to mid-March. The Jazz had an 11-2 stretch in January 2019 and a 12-1 run a couple of months later. And Utah went 19-2 from mid-December until late January last season. But those editions of the Jazz combined to win only one playoff series.

These Jazz play with a certain sort of energizing joy — “It just looks like fun,” reigning MVP Giannis Antetokounmpo remarked after his Milwaukee Bucks lost to the Jazz by double digits for the second time this season — but they frequently issue postgame reminders that they haven’t accomplished anything worth celebrating yet.

There are some apparent differences between this season’s Jazz and the Utah teams from the previous few campaigns, the results of the front office’s work to address the team’s flaws.

The Jazz recognized that they were far too reliant on Mitchell to generate offense after Utah’s ugly showing in the first round of the 2018 playoffs, a five-game dismissal at the hands of the Houston Rockets in which the Jazz shot 40% from the floor and 26.3% from 3-point range.

Utah made adding playmaking and shooting their top offseason priority, trading for point guard Mike Conley and forward Bojan Bogdanovic, then dealt for Jordan Clarkson midseason to add a desperately needed scoring threat off the bench.

“You kind of go back to the old Detroit team that won it. They just had a lot of really good players. I thought Utah needed another star, but I’ve changed on that.”

There were some extenuating circumstances in the Jazz blowing a 3-1 lead to be bounced by the Denver Nuggets in last season’s playoffs, primarily Bogdanovic’s absence due to surgery on his shooting wrist. But the Jazz came out of the bubble knowing that they needed to figure out how not to sink when Gobert sat; Utah was plus-319 in the All-NBA big man’s minutes last season, including the playoffs, and outscored by 117 when he rested.

Utah addressed that issue by bringing back Derrick Favors, Gobert’s longtime frontcourt partner who was traded to create the salary-cap space to sign Bogdanovic the previous summer. Favors came back to Salt Lake City with the understanding he would not return to his role as the starting power forward, instead being utilized almost solely as the backup center.

Just like that, the Jazz had a rock-solid, eight-man rotation, composed completely of players who have been productive as starters, have consistent, defined roles and buy into the style Utah wants to play. Coach Quin Snyder can now count on always playing lineups that feature multiple playmakers, four 3-point threats and a center who serves as a defensive anchor and roll man.

Two seasons ago, the Jazz were a decent 3-point shooting team that was elite defensively. That was flipped last season. These Jazz are now among the best at both — and have embraced the 3 like never before, leading the NBA in treys attempted (42.5 per game) and made (16.8, on pace for a league record).

“Wow, they spread you out,” a West scout said. “They can drive it, shoot it and have a lob threat. They’re really tough to defend now.”

All but one of Utah’s top eight players are locked up with long-term deals after new team owner Ryan Smith approved new contracts totaling at least $420 million to keep Clarkson, Mitchell and Gobert in Jazz uniforms for years to come. The exception: Conley, whose increased comfort level in his second season in Utah is commonly cited as a critical factor in the Jazz’s success this season.

Conley struggled to make the transition after spending the first dozen years of his career with the Memphis Grizzlies. This season, Conley entered All-Star balloting as a third candidate for the Jazz alongside Gobert and Mitchell, in large part because he ranks second in the NBA in raw plus-minus (plus-280), trailing only his teammate Gobert (plus-298).

“Mike Conley is much different,” a West scout said of the 33-year-old point guard who is averaging 16.4 points and 5.6 assists per game with the best effective field goal percentage (.559) of his career. “He knows their system and knows their personnel, and he’s shooting the ball great.”

But the Jazz kept winning even without Conley, going 6-0 while he nursed tightness in his right hamstring, with Joe Ingles stepping into the starting lineup.

That stretch included wins over teams that at the time had the top two records in the Eastern Conference, with Clarkson averaging 32.5 points on 60.5% shooting in the victories over the Bucks and the Philadelphia 76ers, further enhancing his status as a Sixth Man of the Year contender.

THE JAZZ STRUCK an upbeat tone after Friday’s 116-112 loss to the host Clippers, the lone blemish on Utah’s February record.

“I think this is a bump in the road and a good one, in my opinion,” Mitchell said, citing the experience of competing in clutch situations, a rarity considering that an eight-point victory at the Indiana Pacers was the closest game during the nine-game winning streak that got snapped that night.

The Jazz were pleased that they met the Clippers at full strength, as George and Leonard also came back from injuries, and were invigorated by what they considered playoff-type intensity, wanting to get an accurate measuring stick.

“It was a great opportunity for us to just keep getting better,” Gobert said.


However, the result reinforced the belief around the league that the Jazz remain underdogs against the loaded L.A. teams despite Utah’s spot atop the West standings.

Those who doubt the Jazz’s ability to beat L.A. — either the Clippers or Lakers — typically cite defensive concerns first. Royce O’Neale usually guards the opponent’s best scorer, from shooting guards to power forwards.

“Who guards the other guy, is the problem,” a West scout said, referring to two-superstar opponents that could stand in the Jazz’s way in the playoffs.

It’s a problem the Jazz would prefer not to have to deal with until the Western Conference finals. That’s a reason holding on to the West’s best record is important. It would likely mean the L.A. teams would meet each other in the second round, so the Jazz wouldn’t have to beat both the Lakers and the Clippers to get out of the West.

“I think they’re the third-best team in the West,” an Eastern Conference executive whose team has lost to the Jazz recently said. “I think they might have the best record in the regular season, but I do not think they should be favored over either L.A. team. In fact, I would heavily favor the L.A. teams, but I like the Jazz a lot.

“They’ve done what they should do, which is put themselves in position where they can pull off an upset with a little luck.”

The hot new thing: speaking into your phone