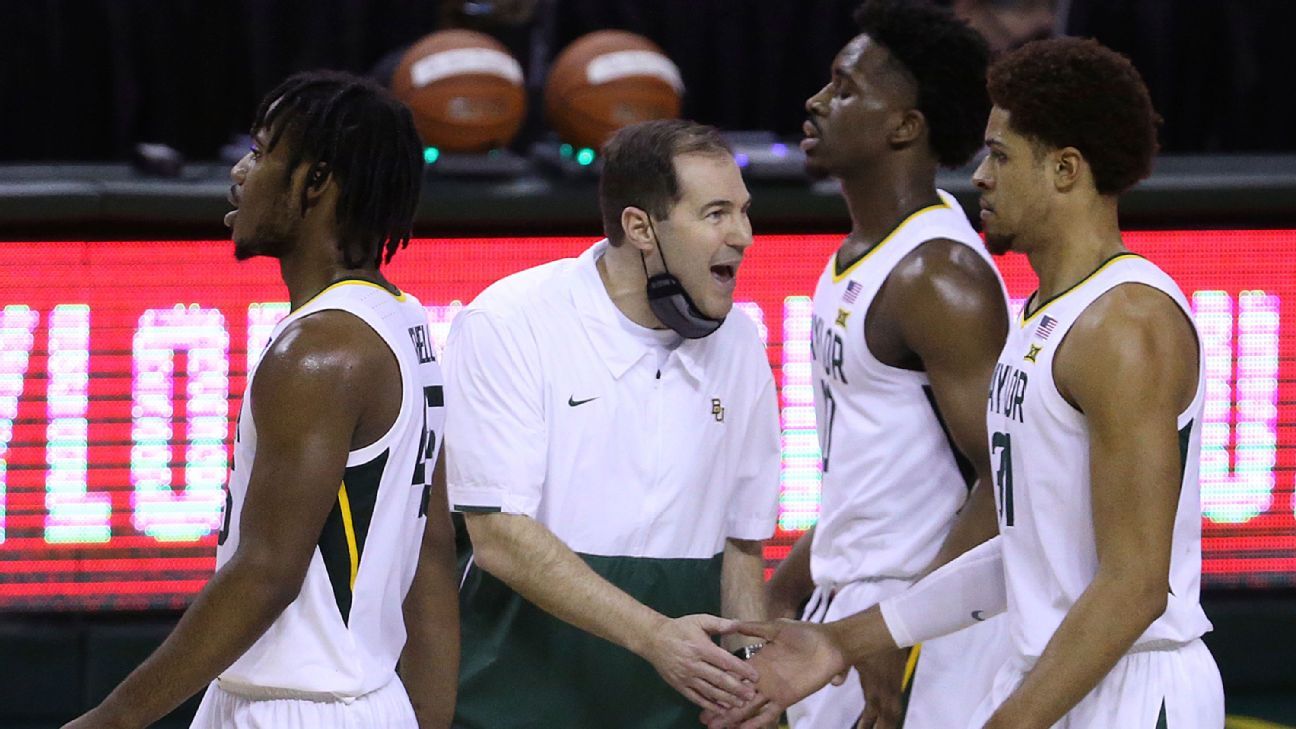 
On Monday, Baylor Bears star Jared Butler seemed confident in his team’s ability to bounce back after its three-week pause due to Covid-19 protocols, a hiatus he compared to being grounded by his parents while his friends around college basketball were allowed to play outside.

Yet, the Bears never found a rhythm until the final minutes of Tuesday’s 77-72 come-from-behind win over Iowa State (2-17) in Waco, Texas, on Tuesday. In a matchup between an Iowa State team ranked 236th in the NET against a Baylor squad, No. 2 in the NET entering the game, the latter struggled to regain the stride that had turned the program into an undefeated juggernaut, which many expect to meet undefeated Gonzaga in the national title game in Indianapolis.

However, Iowa State, 0-13 in Big 12 play entering the game, led by 17 points with 6:26 to go in the first half. The sluggish start seemed to confirm Baylor coach Scott Drew’s concerns prior to his team’s first game in 21 days.

Baylor only returned to full practice on Sunday and Drew compared the session to the sluggish practices that often follow Christmas break. Per the team, Covid-19 protocols created various levels of isolation and restrictions for individual team members.

The pause and lack of consistent lineups broke in the momentum that’s made Baylor a top-five team in the Associated Press poll for 25 consecutive weeks, second only to Gonzaga (28), per ESPN Stats & Info. Three players, including key reserve Jonathan Tchamwa Tchatchoua (7.8 PPG), missed Tuesday’s game. And the team had only practiced with a new starting lineup featuring Matthew Mayer at center 48 hours prior to unveiling it.

“Best way I can kind of explain what was going on was we just had a lot of guys who were out for numerous reasons,” said guard Adam Flagler, Baylor’s catalyst throughout Monday’s game and led the team with 22 points (4-for-10 from the 3-point line). “We just all weren’t together.”

It showed. At halftime, Baylor had 10 turnovers and Iowa State, a 24-point underdog, and the worst offensive team not named Kansas State in the Big 12 per possession, had made 52 percent of its shots.

But Baylor isn’t the only team that didn’t immediately regain its old form after challenges related to Covid-19. Florida finished 4-for-21 from the 3-point line in a 75-64 loss to Arkansas on Feb. 16 after nearly two weeks out of action. Michigan was down 39-27 at Wisconsin at halftime in its first game following a three-week pause on Valentine’s Day. Texas’ loss to Oklahoma on Jan. 26, which Shaka Smart missed after testing positive, kicked off a three-game losing streak for the Longhorns.

“I think it really showed a lot of heart from our guys,” Drew said in the postgame press conference on Tuesday. “I’ve talked to a lot of coaches who’ve had long pauses. Normally, they say three games until you’re normal. Minimum.”

The good news is that Baylor played to its pedigree down the stretch on Tuesday. Senior guard MaCio Teague made a couple of late buckets after breaking down defenders. Mark Vital played great defense. Flagler hit shots during a key run in the first half and then again after the break.

It was never pretty. But the NCAA tournament selection committee will focus on the result more than the optics.

Baylor, in its first game back, beat an Iowa State team that played its best basketball of the season and refused to give Baylor room for a game-altering run. Nothing about the matchup made sense: not Baylor’s early missteps, not Iowa State’s efficiency in the first half.

A Saturday road game at Kansas, however, should test Baylor, though. Kansas is playing some of the best defense in the country right now. A Thursday matchup at West Virginia has been rescheduled for March 2. Two days later, the Bears will face Cade Cunningham and Oklahoma State.

Baylor looked rusty against the Cyclones. But games against Kanas, West Virginia and Oklahoma State will demand a better effort.

“It was fun,” Flagler said after the comeback win on Tuesday, “but we definitely don’t ever want to get down like that.”