Andonovski’s side must get sharper with Olympics up next 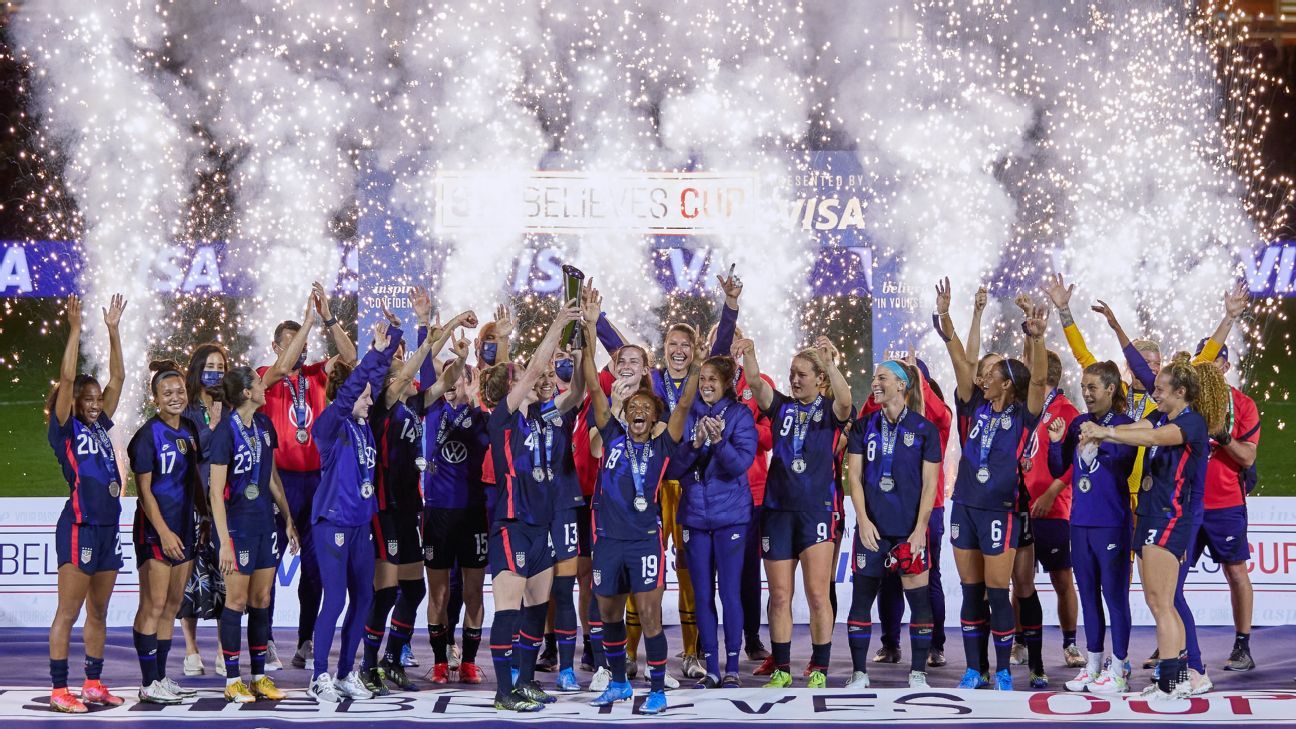 
Few were surprised that the USWNT won its fourth SheBelieves Cup in six years on Wednesday, but the Stars and Stripes certainly made the march to the title more of a slog than anticipated.

Their opponents — Canada (missing seven key players), Brazil and Argentina (a late replacement for Japan due to COVID-19 concerns) — were not the quality of teams of past SheBelieves Cups, so I thought the tournament would be fairly one sided for the U.S., only that wasn’t the case. Canada looked quite good against the U.S. under their new head coach, Bev Priestman, Brazil was more organized under former USWNT head coach, Pia Sundhage, and Argentina? Well, Argentina was what we predicted… underwhelming.

With the Olympics still scheduled to begin less than five months from now, let’s reflect on what we’ve learned from this SheBelieves Cup:

For the U.S., not playing their best and still winning the title is always a good thing. Here’s why: These players will return to their clubs knowing that their world domination is not yet complete. In Orlando, they were sometimes exposed at the back, errors that better teams would punish.

The U.S. were not clean in front of goal, either — that could be the difference in a tight game against a better opponent. These players know all of this, and that will gently haunt them. They will watch the games back and work on getting things right, understanding that the SheBelieves Cup was a subtle, yet important reminder for them to keep that fire burning bright.

Speaking about keeping that fire burning, when USWNT head coach, Vlatko Andonovski, is asked about how many spots on his 18-player Olympic roster remain open, he says 18. Obviously, he has many locked in, but I do think due to the limited games and access to players and training camps, this Olympic roster is understandably going to take longer to decipher.

Roster roulette is a fascinating game to play, so let’s give it a try. Based on the last six games (three in SheBelieves Cup, plus Colombia twice and the Netherlands), and assuming Andonovski and his staff are taking two goalkeepers, six defenders, five midfielders, and five forwards, here are some scenarios (and the player options for that final spot in italics):

Where is Carli Lloyd in her comeback after missing most of 2020 because of injury?

Lloyd had a goal and assist against Argentina and looked sharper than in her previous SheBelieves Cup game, but she missed a few excellent chances vs. Canada. Rapinoe’s comeback, after also missing most of 2020, seems clearer. She finished the SheBelieves Cup as the leading scorer and also leads the team with five goals in five games in 2021. Rapinoe has shown she can still impact games quickly and consistently. I think Lloyd will need to show that in the coming months as well.

How has Alex Morgan recovered from missing 2020 due to pregnancy, a knee injury and a COVID-19 diagnosis spilling into 2021?

I thought her performance against Brazil was a plus. Her touches were sharp, her movement good. She also scored a nice goal against Argentina.

Did Lynn Williams help or hurt her case for breaking into the final 18 Olympic roster based on her play in this SheBelieves Cup?

This is a tough question for me to answer because I love so much of what Lynn Williams does with her speed. She gets into great positions and turns defenders, which makes her a consistent threat to the opposition. She also does a ton of work on the defensive side of the ball. All great attributes, yes, but her final pass and her finishing are far too inconsistent, hurting her chances to become a regular starter.

If Williams finished some of those opportunities against Canada and Brazil, the games would have been less of a slog.

How many younger players can Andonovski afford to break in? Will they be ready for the Olympics?

Catarina Macario struggled in midfield vs. Canada, but excelled as a forward in both games against Colombia. Unfortunately, Macario did not get to see a lot of time in this SheBelieves Cup as she went back early to her club in Lyon.

Sophia Smith came into the game in the 65th minute against Brazil and while she didn’t make much of an impact, she played a beautiful ball for the assist on Alex Morgan’s goal vs. Argentina. I think this young player may be on the outside peeking in, but she is going to be fun to watch. She runs at players better than most.

Then there’s Kristie Mewis. Not a young player — she’s 30 — but she is new to the mix (or, more aptly, newly back in the mix) and has looked consistently sharp, with a goal and assist against Argentina.

– Would Andonovski consider taking five defenders, instead of six, since Julie Ertz can also play center-back?

If he did that and he took Dunn, Sauerbrunn, Dahlkemper, O’Hara and Sonnett, the U.S. would have 3 natural outside-back options in Dunn, O’Hara and Sonnett. That seems thin for that position given the tight Olympic game schedule and how often O’Hara has been injured. That is why I think he takes six defenders and Ertz in midfield.

Since he does have the Ertz option at center-back, I think that sixth defender will have to be a player who can play outside back.

– How about the midfield mix?

If Vlatko felt strongly about both Macario and Kristie Mewis, Macario could go as a forward, but that means other forwards (like Lloyd, Williams and Smith) might not make the roster. I cannot see that happening. I think Lloyd is going. Her work on on both sides of the ball is still one of the best on the team. Add in her strong mentality and finishing ability in big moments, and even at 39 years old at the Olympics, she can help the team.

USMNT’s Rose Lavelle says that the white players need to “pull their weight” in the fight against racial inequality.

With the Olympic rhythm being tighter than the World Cup schedule (two days rest at the Olympics, compared to three at a World Cup) and the Olympic roster being five players lighter than a World Cup roster, you can’t afford to bring players who may help the team or are not 100 percent fit. With only 16 field players and limited rest, EVERY SINGLE PLAYER must contribute, which is why the U.S. are the clear favorites to win the Gold Medal: their squad is much deeper than any team out there.

That is their superpower. The U.S. can field two line-ups that are quite different, yet both strong, and we’ve seen Andonovski do this throughout his tenure with the national team. Who else in this Olympics pool could do that without losing much at all in that second group? Maybe Great Britain. For the U.S., it will be less about who is starting and more about managing the rhythm of minutes played per game so that whichever combination is on the field, they are aggressively dictating the tempo.

Overall, I think the U.S. will take a big positive from this SheBelieves Cup because they remain undefeated under Andonovski, and let’s not forget: they did not concede a goal in this tournament, the first team to ever do that in the tournament’s history. (It just goes to show you the standard by which we judge this team’s performance, which I still think was far from their best.)

Andonovski’s last chance to evaluate players against other international opponents comes in the April FIFA window (by the June window, the team will be set). It’s just the environment needed to make those final judgements and then start rallying the Olympic team of 18 together.

Here’s to hoping an Olympics will indeed be played in July. Sending out my best YES-the-Olympics-will-be-played karma into the world right now. Do the same, please!