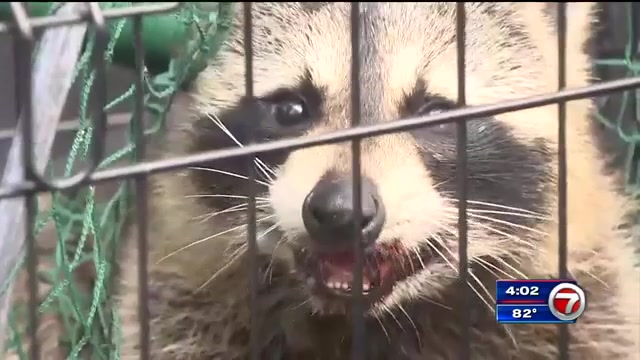 
FORT LAUDERDALE, FLA. (WSVN) – Trappers have caught a raccoon after it went on the attack in Fort Lauderdale’s Shady Banks neighborhood, sending two women to the hospital.

One of the victims said the animal surprised her while she was outside doing yardwork.

“I was clipping, raking leaves here … He came through the bushes, growling and angry and just grabbed and didn’t let go,” she said.

The resident said she tried to defend herself with the gardening tool in her hand.

“Luckily, I had the clippers in my hand, and I hit him very hard,” she said. “Otherwise, I would not have gotten rid of him. He was so determined.”

FLFR Battalion Chief Stephen Gollan said the furry trespasser was not ready to give up.

“The raccoon was so crazy that, as the lady retreated back into the house to call for help, the raccoon actually followed her all the way to the door and even pawed at the door trying to get in,” he said.

Gollan said this was the second call they received. Both attacks unfolded under similar circumstances.

“This morning we received a call one street over for a lady who had been bitten by a raccon,” he said. “She was out in her yard doing normal maintenance around the yard when the raccoon came up and attacked her.”

This woman suffered injuries to her feet and legs.

“It immediately came to out attention that this could be a rabid raccoon in the area,” said Gollan.

FLFR crews called Florida Fish and Wildlife to retrieve the raccoon that was still under the deck of the second victim’s home.

Trappers tried to lure it out with food and a trap, but the animal stayed put.

Trappers moved in with a net, and after several attempts were able to trap the raccoon.

7News cameras captured the moment a trapper scooped up the growling and snarling intruder.

FWC is taking the animal to get tested for rabies.

“We just want the neighbors in that area to be careful,” said Gollan. “When a situation like this occurs, and we have a raccoon or an incident with a rabid animal, there is the possibility that there are others in the area.”

Officials advised residents who spot another raccoon to check whether the animal is foaming at the mouth and whether it appears to be disoriented and confused. Those could be signs it could have rabies.

The raccoon in Friday’s attacks will have to be put down in order to take a brain tissue sample to determine whether it has rabies. If the sample comes back positive, FWC will issue a rabies alert to area residents.

Copyright 2021 Sunbeam Television Corp. All rights reserved. This material may not be published, broadcast, rewritten or redistributed.

Zlatan’s back! Man United vs. Milan in Europa League brings Ibrahimovic back to Old Trafford

Canada to receive 6.5 million Covid-19 vaccines by end of March