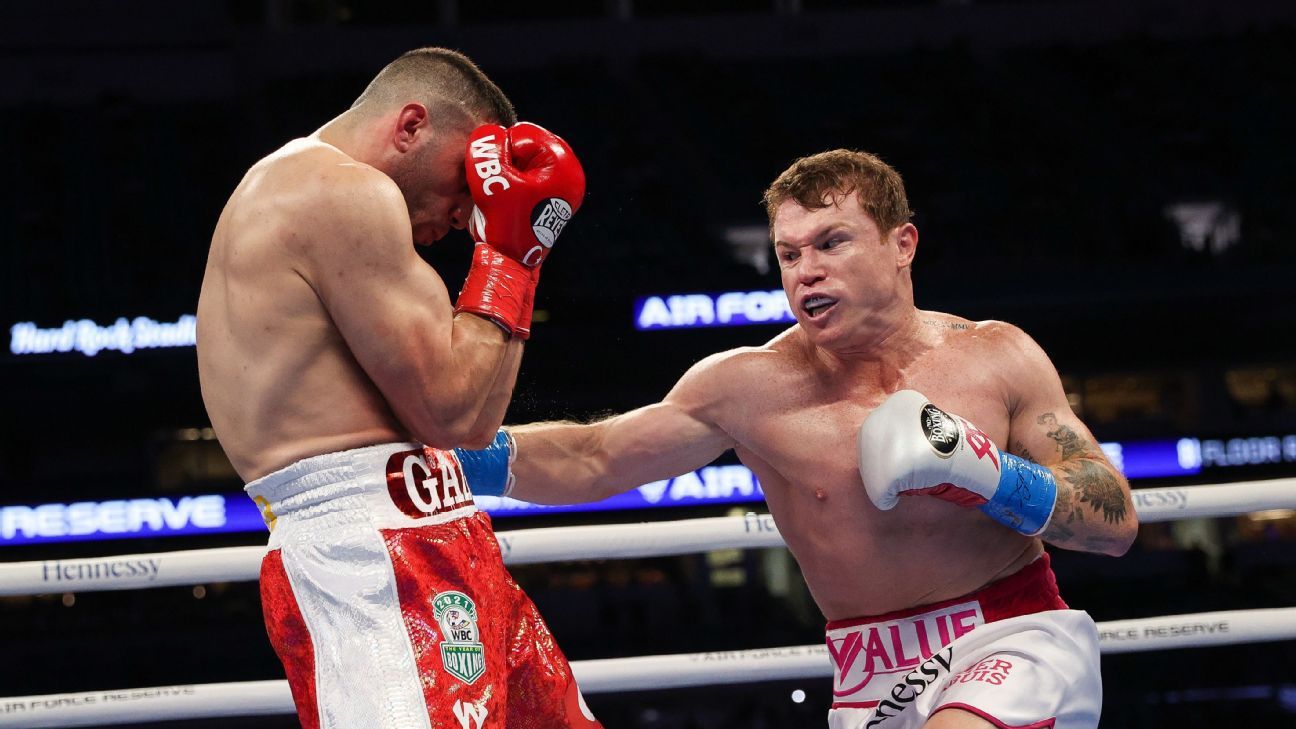 
From the opening bell, Canelo Alvarez appeared destined for a knockout victory against mandatory challenger Avni Yildirim. Alvarez didn’t have to wait long for that.

Yildirim’s corner threw in the towel at the end of the third round, as Alvarez picked up a TKO victory and retained his WBC and WBA super middleweight belts Saturday night at Hard Rock Stadium in Miami Gardens, Florida.

After the fight, Matchroom Boxing’s Eddie Hearn confirmed that Alvarez will face WBO titleholder Billy Joe Saunders in a unification bout on May 8 at a location to be determined.

“I wanted to have a great fight here,” Alvarez, speaking through a translator, told the crowd at the Hard Rock Stadium in Miami Gardens, Florida, where attendance was capped at 15,000 due to COVID-19 restrictions. “I needed to knock [him] out, and that’s what I did. That’s what I had to do.”

Alvarez (55-1-2) was the lone fighter in the ring pressing the action in the first three rounds. Early in the fight, Alvarez threw looping hooks around Yildirim’s high guard and pelted the Turkish fighter’s body.

And even in a fight against someone of Yildirim’s caliber, Alvarez displayed the ring acumen that cemented as status one of boxing’s top pound-for-pound fighters. Instead of a hook, Alvarez floored Yildirim with a straight right hand with more than two minutes to go in the third round.

Yildirim (21-3, 12 KOs) survived the round and even while he sat in his corner before the fourth round, appeared to be game for at least three more minutes.

“I’m going to give you one more f—ing round,” Diaz told Yildirim in the corner during the DAZN telecast.

However, even that was too much to ask. Another member of Yildirim’s corner went up to the apron and asked for the fight to be stopped, a request that was obliged.

According to CompuBox stats, the fight was as lopsided as it looked. Alvarez outlanded Yildirim 67-11, including a 58-4 edge in power punches. In the pivotal third round, Alvarez threw 53 power punches as he pounced on the opportunity to overwhelm Yildirim, who attempted to catch the Mexican champion to no avail.

Alvarez picked up his second victory in three months and maintained two of the four belts in the 168-pound division. He won’t have to wait much longer to have a shot at the third title. The fight against Saunders gives Alvarez a chance to move one step closer to being an undisputed champion and bolster his case to be the greatest Mexican fighter of all time.

“I want to make history,” Alvarez said through a translator in the post-fight interview. “I want to be one of the best in the world.”

How the Czech Republic slipped into a Covid disaster, one misstep at a time