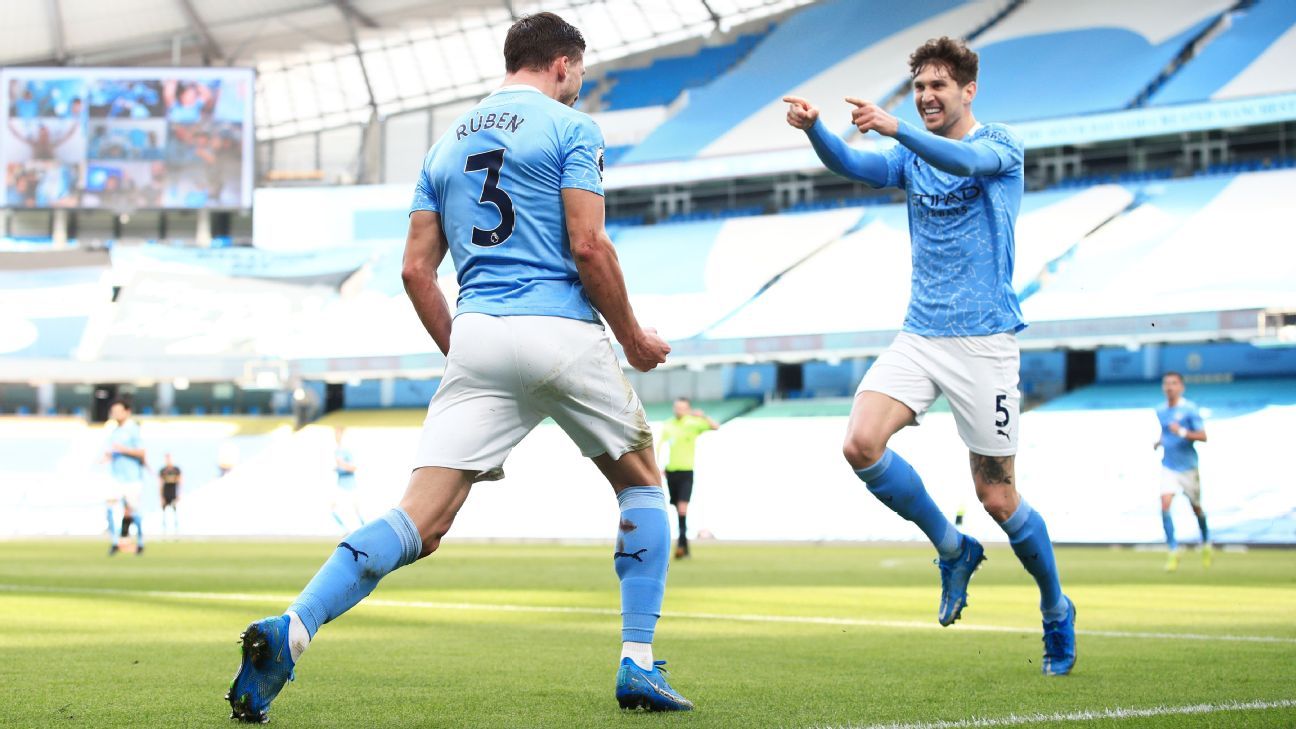 MANCHESTER, England — As Rodri re-took his seat in the stands at the break, he was asked by a member of Manchester City’s staff about Pep Guardiola’s half-time team talk. That the Spanish midfielder chose to respond only by widening his eyes and puffing out his cheeks said everything about Guardiola’s mood and how the first 45 minutes against West Ham United had gone.

But as always seems to be the way these days, Guardiola was left talking afterwards about another win. It ended 2-1 and City now have 20 wins in a row.

Even on a relatively off day for Guardiola’s team, West Ham, the Premier League’s other team in form, could not find a way to end the run. You know it’s going well when your forwards can’t score but both centre-backs chip in with a goal.

It was almost as if Ruben Dias and John Stones, the two goal scorers, took it personally when Michail Antonio became the first opposition player to score at the Etihad Stadium since Mohamed Salah in November. City have defended so well this season that Dias and Stones have scored more goals (5) than they have conceded (3) in games they have started together.

More importantly for Guardiola, City are now 13 points clear at the top with 12 games to play.

“It was really difficult, after 45 minutes today we realise we are not going to paint anything beautiful,” said Guardiola. “Second half we were much better than the first half. When you play a lot of games, in the league and then the Champions League, this is normal.

“We were lucky to get all three points. The mathematics matter at the end of the season.”

It’s been a while since Guardiola has had to tear strips off his players during a winning run that started in December, but he was not happy with a first-half performance that saw West Ham have six shots to City’s two. The score at half-time was 1-1 but West Ham could easily have been ahead. Antonio scored one after it was put on a plate by Jesse Lingard but should have had another when he skewed a good chance wide.

City haven’t had to hang on for results recently but David Moyes was still rushing to get the ball back in play in stoppage time as his team looked for an equaliser. They nearly got one too, but Issa Diop couldn’t get his late header on target from Lingard’s pinpoint cross.

Lingard, signed on loan from Manchester United in January, was West Ham’s spark at the centre of everything positive they did going forward. Playing in the hole just off the striker, he got one assist for Antonio’s goal but would have had a couple more if the finishing had been better.

The 28-year-old could have stayed on the fringes at Old Trafford but he forced a move away and his faith in his own ability is paying off. He is back on Gareth Southgate’s radar after a spell out of the England squad and on this evidence it’s easy to see why.

With a year left on his contract, Manchester United will have a decision to make in the summer: either offer him a new one or sell. The downside for West Ham is that with every passing game, his price tag is going up and up. Lingard was name-checked afterwards by Guardiola as a reason why City had struggled so much.

“I am really disappointed we didn’t get a point,” he said. “It was a terrific performance from the players. We tried to match a top side and for long periods we did. I don’t want to promise what I can’t deliver, if someone had said at the start of the season we would finish in the top half we would have been happy.

“We came to the best team in Europe and gave them a really good game. If we play like that between now and the end of the season we will be up near the top. We’ve had a good season but we have the chance to make it a great season.”

Guardiola’s side are dreaming of a great season as well, and it could yet end with an unprecedented quadruple. Already in the Carabao Cup final, into the quarterfinals of the FA Cup and well on their way to another Premier League title, it is hard to see who can stop them from winning a second domestic treble in three years.

For a while now they have seemed destined to stroll effortlessly to the title but against West Ham they also had an answer to a sterner examination. Beauty and brawn is a good mix for a team still fighting on four fronts, and City have both.

LeBron vs Zlatan: Who won the politics bout?