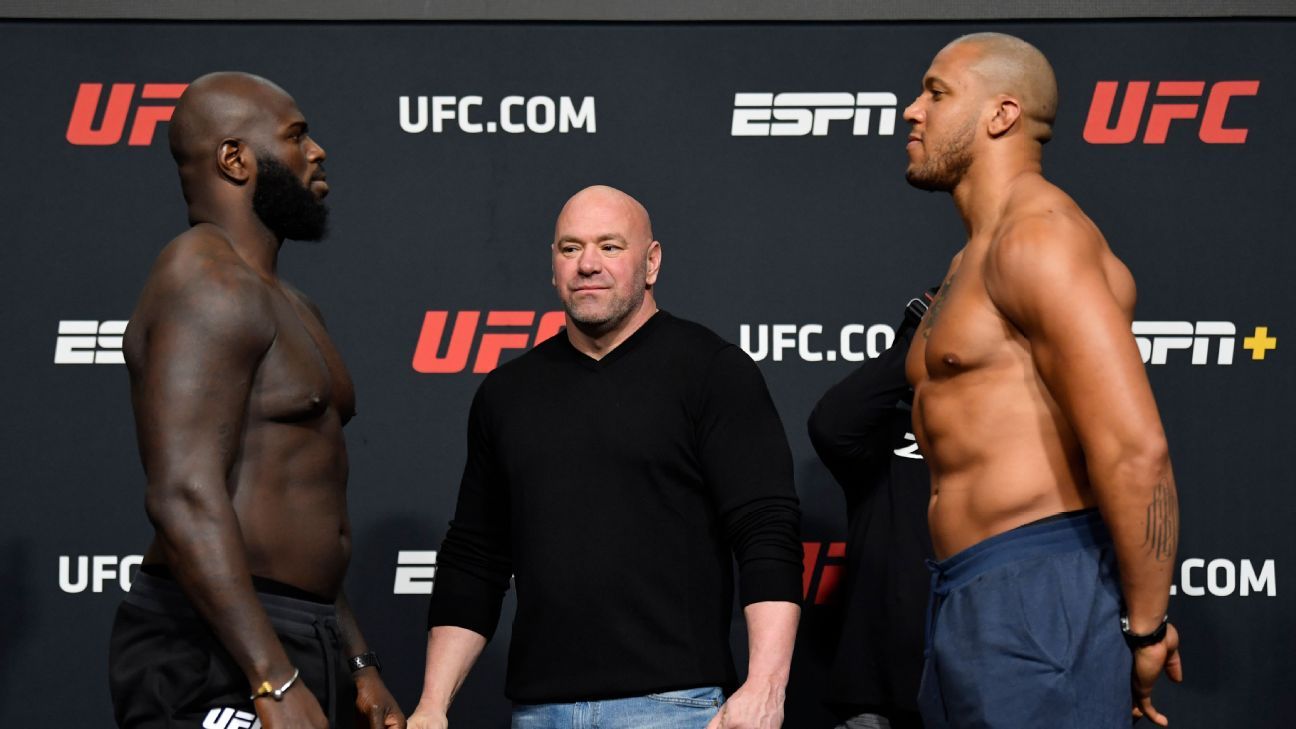 
For the third time this month, heavyweights will take center stage at the UFC Apex.

Jairzinho Rozenstruik and Ciryl Gane do battle in a clash of heavyweight contenders in the main event of UFC Fight Night on Saturday in Las Vegas. The winner will keep pace in a crowded contender field in the UFC’s largest division. ESPN has Rozenstruik ranked No. 4 at heavyweight; Gane is No. 8.

Rozenstruik (11-1) is coming off a second-round TKO win over former heavyweight champion Junior dos Santos at UFC 252 in August. The Suriname native has won five of six fights in the UFC. His only career loss came against upcoming title challenger Francis Ngannou via knockout last May at UFC 249. Rozenstruik, 32, has 10 KO/TKO finishes in 11 career wins. He is a former champion kickboxer.

Gane (7-0) is one of the top prospects in all of MMA. The France native is 4-0 in the UFC with three finishes. Gane, 30, is also coming off a second-round TKO win over Junior dos Santos, at UFC 256 in December.

In the co-main event, young Eastern European light heavyweights Nikita Krylov and Magomed Ankalaev will square off. Krylov (26-7) is 2-2 since returning to the UFC in 2018, but has lost only to champion Jan Blachowicz and top contender Glover Teixeira. Ankalaev (14-1) has won five straight and is closing in on contender status in the 205-pound division.

Also on the card, Pedro Munhoz and Jimmie Rivera meet in a battle of bantamweight contenders and prospect Sabina Mazo looks to climb the women’s flyweight ladder against stalwart Alexis Davis.

Watch the action live on ESPN+

In the final seconds before the horn to end the fight, both men noticeably turned up their aggression. They knew this one was still up for grabs. Even as Bruce Buffer was announcing the result — 29-28 on all three judges’ scorecards — both Jacoby and Grishin looked confident, poised to celebrate. That was not delusional on either man’s part.

It was Jacoby who had his hand raised for his fourth straight victory. The last two of those have been in the UFC — in his second run in the Octagon. He was cut by the UFC in 2012 after going 0-2, and it took the 32-year-old over eight years to work his way back. Jacoby has shown a resolve to overcome.

He had a big obstacle to deal with on this night, as Grishin missed weight by 4½ pounds. The Russian, 36, appeared to tire by mid-fight, although he did seem reenergized in the final round. Still, he now has lost two of three in the UFC after entering the promotion last year riding a nine-fight unbeaten streak.

Brooklyn Nets to be without Kyrie Irving (shoulder) vs. Dallas Mavericks