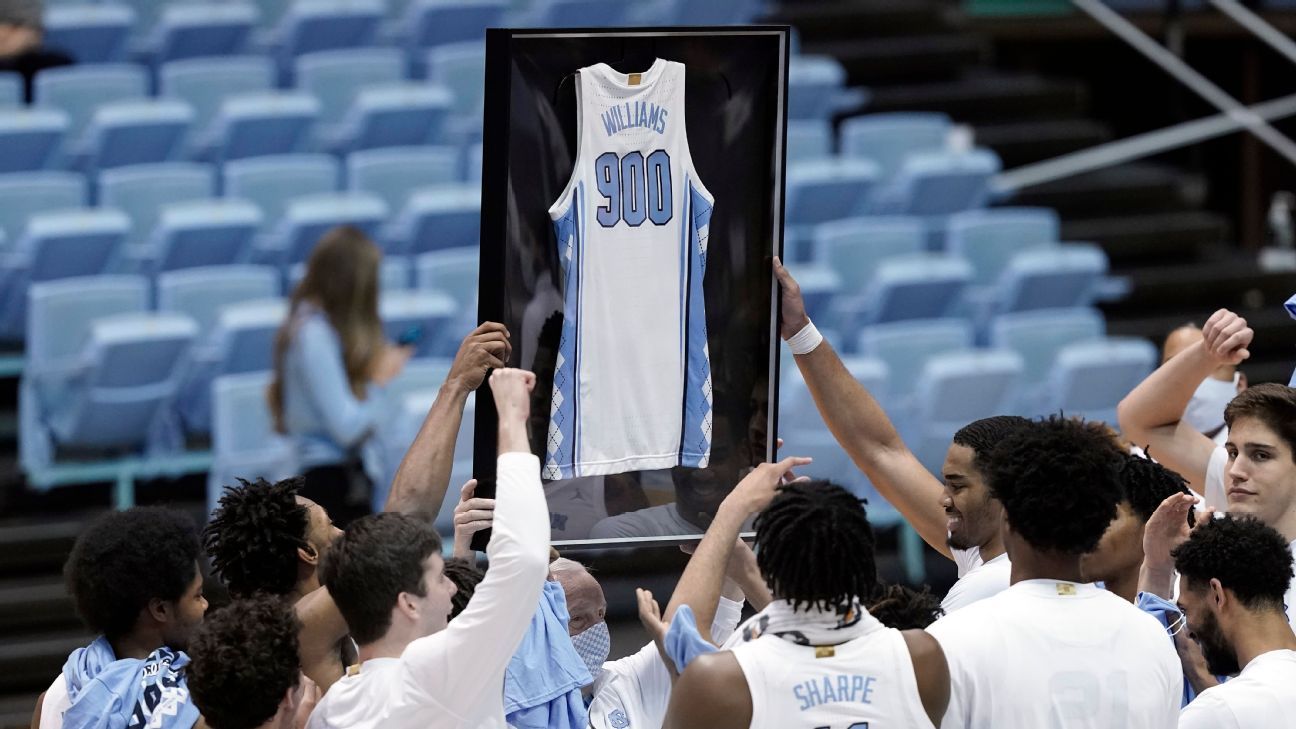 
CHAPEL HILL, N.C. — North Carolina’s Roy Williams became the fifth Division I men’s basketball coach to reach 900 wins on Saturday, and he was able to celebrate the milestone in front of home fans for the first time this season.

Down 16 points to No. 11 Florida State shortly before halftime, the Tar Heels rode a 20-point performance from freshman Walker Kessler to mount a comeback against the ACC’s top team. UNC celebrated the longtime coach at midcourt after the game, raising a framed No. 900 jersey in his honor.

Williams joins Mike Krzyzewski, Jim Boeheim, Jim Calhoun and Bob Knight as the only Division I men’s basketball coaches to hit 900 wins. He’s the fastest coach in Division I to reach the milestone, doing it in just his 1,161st game as a head coach.

Williams said he was just focused on getting North Carolina to its 15th win this season, but he admitted after the game that it was a nice accomplishment. “It’s neat, and I appreciate all the players that have ever been involved in those things,” Williams said. “My assistant coaches, for 33 years, I felt like I’ve had the best coaching staff in the world and I believe that every day. But it was nice.”

Saturday also marked North Carolina’s first home game with fans in attendance, which came after Gov. Roy Cooper eased public-gathering restrictions earlier this week to permit indoor arenas with a capacity of at least 5,000 to hold up to 15% of that total.

That meant North Carolina could have around 3,200 fans in the Smith Center, which holds more than 21,000.

Williams, 70, began his Hall of Fame head-coaching career in 1988 with Kansas. In 2003 he began his tenure with North Carolina, where he has won three NCAA championships.

Saturday’s win served to boost the Tar Heels’ résumé for this year’s NCAA tournament. UNC had been trending in the right direction by winning nine of 12 after last weekend’s blowout of Louisville. A loss to Marquette on Wednesday squandered some of that momentum, but the Tar Heels responded well against a tough Seminoles squad.

North Carolina overcame its largest halftime deficit at home in a win since February 2006 against Georgia Tech.