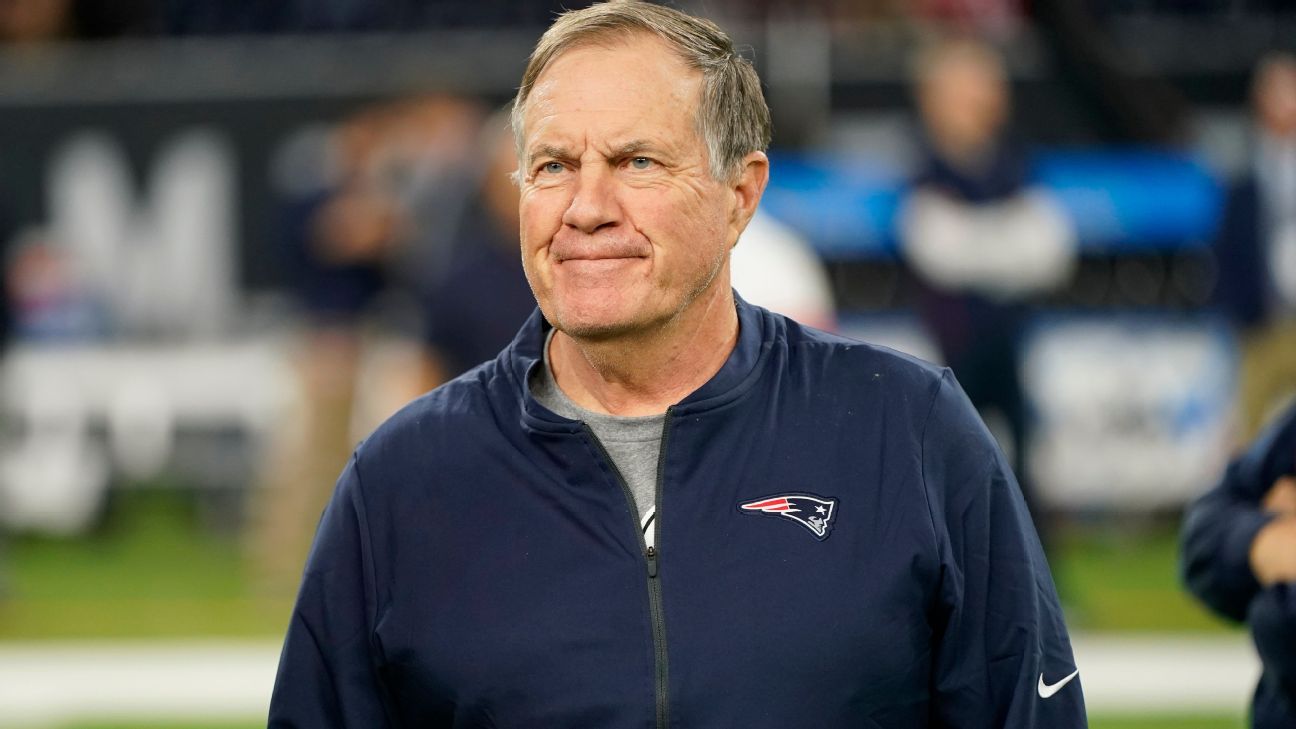 1. Belichick at Forum: Coach Bill Belichick has a lot of important work ahead to improve the Patriots’ roster in 2021, but he still carved time out of his schedule last week to take part in the fifth annual NFL Women’s Careers in Football Forum.

Coach Belichick and Coach Vrabel meet Coach Monique Boone who mentioned that she coaches and also plays tackle football. Smiles across the room, question came up if her game tape can be broken down on this Zoom. pic.twitter.com/b5g9vF7PqK

How would you describe the breakout session?

“It was extremely personable. [Belichick] was super down-to-earth. You can tell, he just wants to teach. And he just wants to bring people up. That was something he harped on, giving so much credit to everyone else around him. The amount of times he spoke about Coach Vrabel vs. speaking on his [own] decorated résumé, it was just incredible. You could tell servant leadership is one of his No. 1 characteristics. That’s what we need as women, somebody who reaches their hands down and wants to pull us up.”

What did you hear that might be able to help you in your career?

“My question was focused on X’s and O’s, and the advice he gave in terms of coverages, the game-planning and the teaching progression that he talked about was super applicable to what I do on a day-to-day basis. It will make me a better coach. He came from a NESCAC [school in Wesleyan], and I’m currently at a college that is similar, and so I think he understands the value of coaching at this level. One of the main things he mentioned is to always look for a better way. A better way of teaching. A better way of training. It resonates to me that he’s a constant learner. He’s everything we want to be, but he’s coming out and saying ‘I’m looking for new ways to learn and improve.’ That’s inspiring.”

How surprised were you when both coaches shared their contact information?

“The air gets taken out of the room, and everything is so surreal. But at the same time, we’re all coaches just having a conversation, learning from one another. They both mentioned they didn’t feel like they were above anyone, but they … said ‘Hey, how can we help? You want to chat about Cover 5 and Cover 7? Shoot me an email. Send me your PowerPoint, and we can go into how I would coach up your position in that situation.'”

“I hate to say, but he kind of has a little bit of [Tom] Brady in him,” Kiper said. “I’m not saying he’s ever going to be Tom Brady. He wouldn’t be close, probably. But he has that competitiveness, and he’s so smart — he picked that offense up [at the Senior Bowl] like it was nothing. Other quarterbacks were struggling with the verbiage and — ‘boom!’ — he was in and out of the huddle quicker than anybody I’ve ever seen.

“Then he sees the field. He’s tremendously accurate to all levels. He doesn’t have the ‘wow’ arm, like Brady didn’t either coming into the league. And like Brady, he’s not real mobile, not a runner. But biding time, slipping and sliding, he did it in the championship game. So there are some similarities there.”

Kiper has Jones off the board at No. 8, to the Carolina Panthers, in his latest mock draft.

3. Ziegler’s first: The Patriots haven’t formally announced assistant director of player personnel Dave Ziegler, 43, is succeeding Nick Caserio to lead the personnel department, but Ziegler’s first media interview of the offseason — with the team’s “Patriots All-Access” television show that aired Friday — is essentially confirmation. Little-known fact about Ziegler: He holds the record for career punt return yards (1,203), punt-return TDs (3), punt-return average (16.94), kick-return TDs (4) and kick-return average (34.35) at John Carroll University, where he was a teammate of Caserio and offensive coordinator Josh McDaniels in the late 1990s.

4. Harry ‘battered’: Of all the things quarterback Cam Newton said in his appearance on the “I Am Athlete” podcast last week, the most revealing was his description of 2019 first-round pick N’Keal Harry as “battered.” Harry hasn’t met lofty expectations, initially because of injuries, and Newton’s remarks could be viewed in multiple ways. To me, it seemed to spark a question if Harry’s mentality is the best fit in the Patriots’ “machine-like” culture.

5. Action Jackson: Patriots cornerback J.C. Jackson was among those at Gillette Stadium last week. He can become a restricted free agent, which means the Patriots have until March 17 to tender him an offer, and it will be at the first-round or second-round level. That means if another team signs Jackson to an offer sheet, and the Patriots don’t match it, the club would receive that level of draft pick in return. A better scenario for the Patriots, of course, would be striking a longer-term deal.

6. Mariota’s cameo: If the Patriots consider a run at quarterback Marcus Mariota, his Week 15 relief effort in the Las Vegas Raiders’ 30-27 loss to the Los Angeles Chargers will be important tape. Mariota went 17-of-28 for 226 yards, with one touchdown and one interception, and nine rushes for 88 yards and a touchdown. I asked NFL Network draft analyst Daniel Jeremiah, the Chargers’ radio analyst that day, what he remembers most. “[Mariota] was very dangerous with his legs. I thought he abandoned that aspect of his game toward the end of his time in Tennessee. He’s a dangerous player when he’s aggressive like he was that day.”

7. Butler did it: Nice work by “The Two Minute Drill” podcast — which touts itself as covering “everything Foxborough football” — to catch up with Patriots defensive tackle Adam Butler, a pending free agent. Butler said he’s loved his time in New England but plans to do what’s best for him in free agency. At his best, Butler has been the team’s most disruptive interior rusher who plays primarily in sub packages. It will be interesting to see if another team, with a different scheme, views him as a full-time player and pays him as such ($4 million-plus per year).

8. Draft nugget: The Patriots selected Michigan defenders with high picks in each of the past two drafts — defensive end/linebacker Chase Winovich (2019 third round), and linebacker Josh Uche (2020 second round). If they consider keeping the streak alive, it could be a homecoming of sorts with defensive end/linebacker Kwity Paye. Listed at 6-foot-3 and 270 pounds, Paye attended Bishop Hendricken in Warwick, Rhode Island, but his journey extends far beyond that. Kiper said after Paye’s solid 2019 junior season (50 tackles, 12.5 for a loss, 6.5 sacks), he projected him as a top-10 pick, but an up-and-down four-game senior season has his standing a bit lower now.

9. They said it: “Early is on time. On time is late. And late is unacceptable.” — Dolphins coach Brian Flores, a longtime Patriots assistant, relaying words of author Eric Jerome Dickey at the NFL Women’s Careers in Football Forum, when asked what would be essential for any aspiring coach.