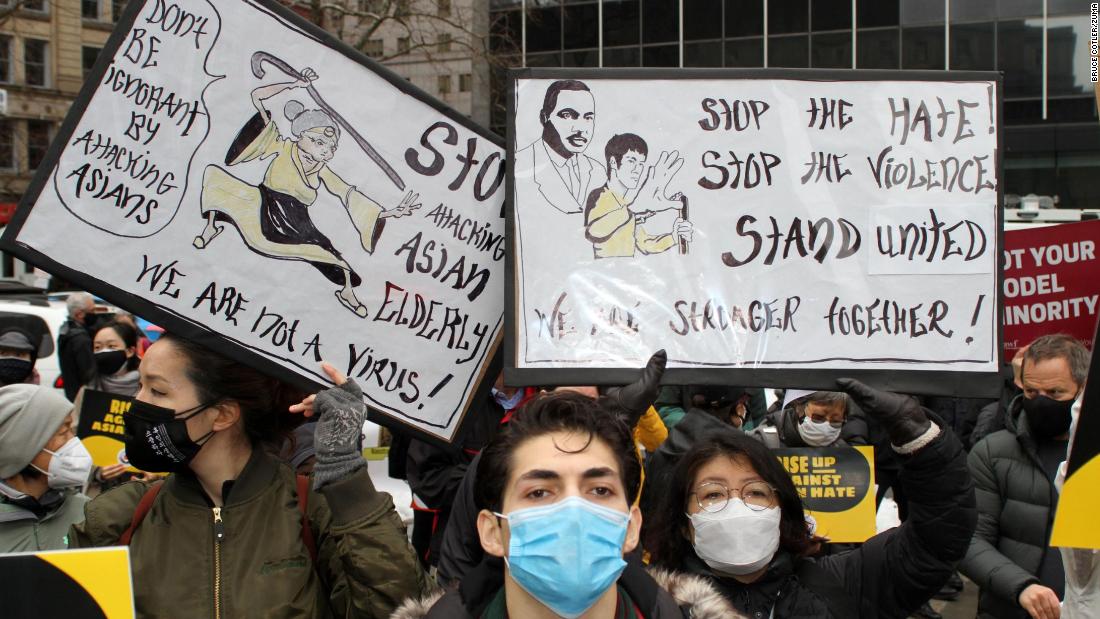 “When I was attacked on the subway, there were so many New Yorkers around me, but nobody came to my help, nobody made a video,” the 61-year old Filipino American said.

“I was scared I wasn’t going to make it. … We are all New Yorkers, and we should be looking out for each other.”

Quintana, a New Yorker, described the February 3 attack to city leaders, Asian Americans and their supporters who attended the “Rise Up Against Anti-Asian Hate” rally in Foley Square on Saturday.

The rally was held to protest a wave of attacks on Asian Americans, including a large number of elderly people. The stabbing of a 36-year-old Asian American man on Thursday is the latest reported incident in New York City. Similar incidents are being reported across the nation.

US Sen. Chuck Schumer, a New York Democrat, told the crowd there were signs of a surge in violence at the beginning of the coronavirus pandemic.

“Tragically, those warnings came to fruition and the Asian American community, across New York and the country, have been the target of race-based discrimination and harassment,” Schumer said.

“Come to my office so we can report on these individuals who hate us, so we can shut them down. Any attack on one of us is an attack against all of us,” James said.

Pearl Sun, a New York City resident, attended the rally but didn’t speak to the crowd. She told CNN she’s now wary when walking in the city streets.

“I think the rhetoric from our previous administration was definitely the catalyst for all of this. Anti-Asian sentiment has always existed, and we’ve had a lot of legislation in the past that has not been good for us either: the Japanese internment camps, the Chinese Exclusion Act of 1882.

“It’s been an ongoing situation, but the previous rhetoric has amped up all of his hate, calling it the kung flu virus and the China virus, and we are sadly, seemingly an easy target.”

“They are defenseless, and it’s cowardly, and it angers me, it really angers me,” Sun said.

City resident Will Lex Ham said many of his family live in fear and anxiety. He said the Asian community does not receive resources in proportion to its population in the city, state and nation.

Reports of attacks on the rise

The rally was hosted by the Asian American Federation, an umbrella organization that advocates for better policies and services for Asian Americans.

The federation says there were “nearly 500 bias incidents or hate crimes in 2020, ranging from verbal to physical assaults, to being coughed at or spat upon, to shunning, among other forms of discrimination.”

Those numbers were collected by the AAF, the advocacy group Stop AAPI (Asian American Pacific Islanders) Hate, the NYPD and the NYC Commission on Human Rights, according to the AAF.

“However, these are a fraction of the actual number of incidents that have occurred, as the majority of incidents go unreported. For example, over 90% of the reports collected by AAF were not reported to either the NYPD or NYC Commission on Human Rights,” the AAF said in a news release.

US senators seek answers from Meta on whether user data was accessed by China, Russia…

Boeing is cutting 2,000 HR and finance jobs, outsourcing some to India

White House looks to undercut GOP arguments ahead of border…

Turkey earthquake: Bodies in street after quake as anger…