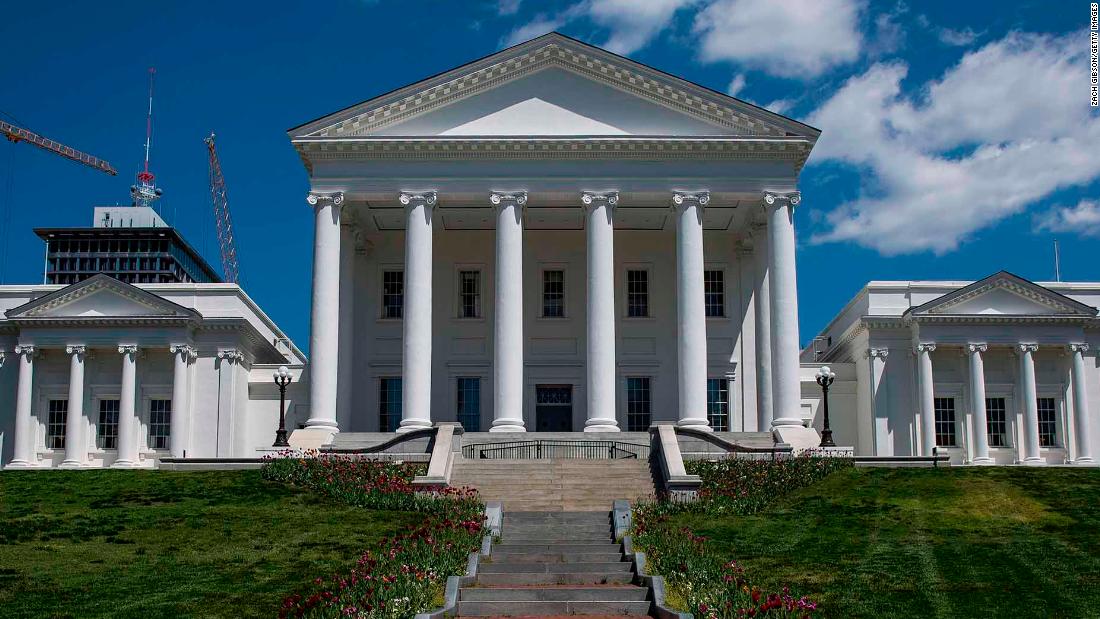 Democrats in the state now control all levers of power — the Governor’s mansion, and both chambers of the state legislature — for the first time in a generation. And they are leading in an unapologetically progressive direction.

The story of Virginia politics in 2021 is a tale of two political parties. Democrats are riding a wave of demographic change and suburban revolt away from the GOP to political power. And Republicans are searching for a way forward, while trying to placate a base increasingly loyal to Trump and motivated by conspiratorial views.

Virginia’s off-year elections have always made it a proving ground for both political parties. But this year more than normal, it could be a potential harbinger of things to come for both parties.

For the first time in the chamber’s 402-year history, the Speaker of the House of Delegates is a woman: Eileen Filler-Corn.

Under her leadership, Democrats have moved quickly to pass a wave of legislation seeking to fulfill campaign promises to their voters and push the state further to the left. They have passed bills legalizing marijuana, instituting universal background checks, raising the minimum wage and loosening voting restrictions. If Gov. Ralph Northam signs their latest high-profile bill into law, Virginia will also soon become the first southern state to abolish the death penalty.

“We are doing exactly what we told Virginians we would do. And I think that’s important,” Filler-Corn told CNN in an interview. “Campaigning on the issues and the values that are important to you — and following through.”

And on other issues, like Confederate monuments and the January 6 insurrection on the US Capitol, Filler-Corn and other state Democrats haven’t hesitated to take a strong stance.
After the riots in Washington, she moved quickly to strip committee assignments from three GOP state lawmakers who expressed support for overturning the results of the November 2020 presidential election — a position pushed by former President Donald Trump.

And as Trump sought to make protecting Confederate monuments a key part of his pitch to voters in the lead up to the 2020 election, Filler-Corn moved swiftly to remove a life-sized statue of Confederate General Robert E. Lee from the old House Chamber, leaving behind a slab of cement.

“It was an easy decision,” Filler-Corn said. “You know, the only thing I had thought of in addition to removing them as quickly as possible, was doing so safely.”

The decision was controversial, prompting a lawsuit from opponents of the move. But for Black members of the House of Delegates, it was a relief.

“One conversation in particular, remember, the tears streaming down, a friend of mine’s face, actually happens to be one of the first Black women chairs of a committee,” Filler-Corn said. “And she told me that she couldn’t walk in this room. It was so painful to her.”

Democrats are moving with a confidence that the political winds are at their backs as the state has become more diverse racially and in terms of socio-economic and educational backgrounds.

But the response in the state Republican Party to a loss of leadership at the state level and Trump’s almost 10-point drubbing in the November election, has not been to turn away from the politics pushed by the former president.

With Northam prohibited by the state constitution from running for a second consecutive term, the race for governor is wide open for both parties. Six Republicans and five Democrats are in the running for their party’s nomination.

Perhaps no other candidate for the GOP nomination for governor is seeking to embody Trumpism more than State Sen. Amanda Chase.

But Chase has hinged much of her statewide and increasingly national profile on mimicking misinformation and lies touted by Trump. Most notably, her continued support for the debunked falsehood that the 2020 election was fraudulent.

Her comments in the wake of the January 6 riot, seemingly praising some rioters (she later said she was referring to other peaceful demonstrators who attended the rally in the Capitol) was one of several controversies that prompted the state Senate to censure her in a bipartisan fashion.

Chase has now taken to waging a war on the Republican Party itself, unsuccessfully attempting to stop the party from holding a nominating convention instead of a primary to select its nominee.

Chase said the move to hold a convention is an attempt to stop her from winning.

“Make no mistake, there are people who are terrified of strong, independent, conservative women,” Chase said. “If they get to the point where the 72 members don’t allow the people to participate, I will declare the Republican Party as dead, and I will start the Patriot party of Virginia.”

She is one of a half dozen Republicans running for the party’s gubernatorial nomination, most of whom, like her, echo some version of Trump’s election fraud claims.

Chase has also battled over Covid-19 restrictions — refusing to wear a mask during the legislative session resulting in lawmakers placing a plexiglass box around her desk.

In an interview, Chase said that she does not wear a mask because she has a medical condition preventing her from doing so, but she also refused to endorse mask wearing in general, which public health officials have said will help control the spread of the virus.

Her theories on Covid-19 go even further into conspiratorial territory. Asked how she would control the virus if she were elected governor, Chase said the vaccine would bring the virus under control — but she would not say whether she believed the vaccine was safe.

“I do believe that the, you know, that this virus is just going to run its course and people are going to develop natural immunities to it,” Chase said, espousing a theory that natural herd immunity could be achieved if the virus were allowed to spread freely. Public health experts have said that such a policy would result in a level of death orders of magnitude greater than what the US has already experienced.

Asked to elaborate on her plan to control the virus if she were elected, Chase also touted hydroxychloroquine, a drug once pushed by Trump as a treatment for Covid-19 that has since been found to be ineffective. And she added that people could be protected from the virus by taking supplements such as Vitamin D. Both suggestions are contrary to the best available science and could potentially be harmful.

If the Republican Party is seeking to move away from this sort of rhetoric, Chase is hoping to make that task more difficult. She carries around her willingness to push these claims as a badge of honor.

Amid the intra-party debate in the GOP over Trumpism and Chase, Democrats in the state of Virginia see an opportunity.

“I think they will continue to lose, and Virginia will continue to shift,” said Filler-Corn when asked how the GOP would fare if they continued to push Trump-inspired politics. “What does that mean for the election? It means we have to work hard to make sure that the other side doesn’t flip things around and roll it all back. Because it could be rolled back like that.”